Passion around elections and chemical weapons 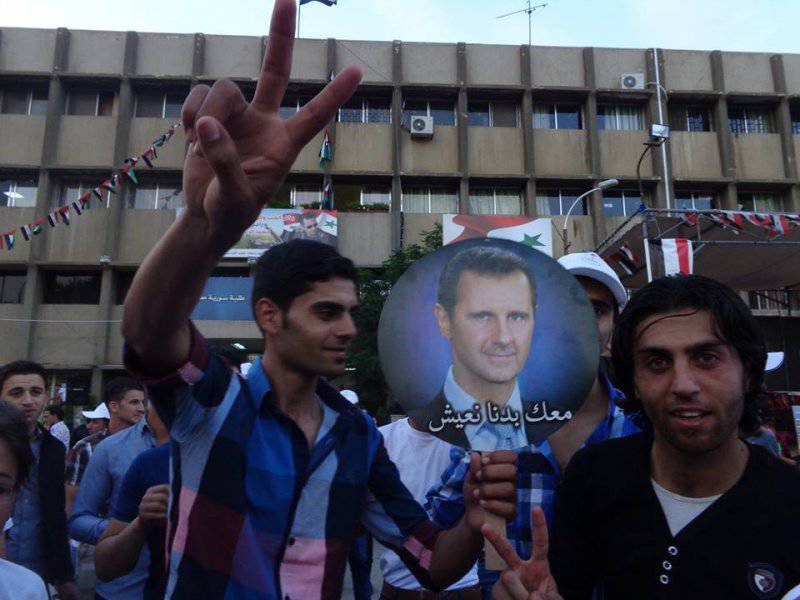 May 28 is the voting day of Syrians living abroad for one of three candidates for the presidency of the UAR. In Syria, I remind you, voting will begin on June 3. In the embassies of many countries, members of Syrian communities are strung together in the morning. Russia is not an exception, where the polling station at the embassy opened with 7 in the morning.

Representatives of the Syrian diasporas in the Russian Federation, Iran, Lebanon, North Korea, China, Yemen, the Czech Republic, India, Sudan, and Jordan are especially actively fulfilling their constitutional and patriotic duty. Syrians living in Beijing even declared that they are proud to be able to participate in the presidential election earlier than anyone else.

ATS Ambassador to Teheren Adnan Mahmoud said that here and in other embassies, the will of the Syrian people to protect sovereignty, express national priorities, uphold moral values ​​and the unity of society will be revealed. He added: "The voice of a citizen of Syria today is the voice of true freedom."

At the same time, several countries simply banned the Syrians living in their territory from participating in the election of the president of their homeland. Among such non-democratic states are France, Germany, Britain, and the United Arab Emirates also joined them. It is characteristic that those Western powers, which shout the loudest on the world stage about democracy and human rights, - undermine the legitimate right of Syrian citizens to be voters.

An outstanding diplomat gave an interview to the Al-Ikhbariya television channel - now he can be called truly outstanding, the UAR Permanent Representative to the UN Bashar Al-Jafari.

He noted that from that moment, as soon as the presidential elections in Syria were announced, in many Western and Arab countries a wave of anti-Syrian hysteria began, which shook even the UN.

The diplomat accused France of submitting a draft resolution to the UN Security Council, which was aimed at disrupting the presidential election, which could create a constitutional and political vacuum, and therefore - turn Syria into an incapable state. According to Al-Jafari, after the failure of the French project, Britain began to prepare a new similar document. In addition, Saudi Arabia is preparing a draft resolution of the UN General Assembly so that the anti-Syrian document is prepared to bypass the UN Security Council.

“We are in a state of diplomatic war and should expect a new surge of terrorism in the country and an increase in political hysteria beyond its borders. Our main weapons currently are: the army and the media in the country and diplomacy abroad, ”- said the permanent representative of the SAR.

Al-Jafari added that Syria has many friends who respect its position, but the richest countries put tremendous pressure on many other states and on individual politicians to participate in the anti-Syrian conspiracy.

Regarding the appointment of a new UN special envoy for Syria instead of outgoing Lakhdar Brahimi, the Syrian diplomat pointed out that the UN General Secretariat has not yet nominated a new candidate, but it is impossible to appoint a new person to this position without consulting Syria.

Let me remind you - when France presented its anti-Syrian project to the UN, its President Francois Hollande and Foreign Minister Laurent Fabius made many accusations against Damascus. Among them was the accusation of using chemical weapons, worn out to the holes.

However, the forces supporting the terrorists continue to do everything possible to thwart any investigation into this matter.

So, on May 27, members of the mission to investigate the use of chemical weapons went to the village of Kafr-Zita in the province of Hama. There, in April of this year, one of the incidents involving the use of chlorine occurred, which killed two people and injured around 100. Despite the fact that the gas was used by terrorists, the West, in its usual manner, without waiting for any results of the investigation, is trying to blame the Syrian government for this. So, four cars of the UN mission staff went to this locality, since the terrorists initially announced a temporary ceasefire in the area. When the convoy reached the village of Taybet Al-Imam, the militants of the “opposition” suddenly changed their decision, either by themselves or by a call from outside. A convoy of UN vehicles drove another two kilometers, after which one of the vehicles was blown up — the gangsters laid an IED on the inspectors ’route and set it off with a remote control. Fortunately, no one died, but the staff were forced to go to other cars. The mission decided to return to Tibet Al-Imam, but the terrorists attacked the convoy. Only one car managed to escape from the ambush. Two vehicles, together with 11, were stolen by the “opposition” mission.
On this occasion, the SAR Ministry of Foreign Affairs appealed to the leadership of the OPCW and the UN, emphasizing that terrorist groups disrupt the work of the mission, constantly committing crimes in relation to its employees, as well as in relation to the UN humanitarian convoys. At the same time, the Syrian state, fully cooperating with the OPCW, provides mission members with protection in those areas that are under the control of the army.

The abducted persons have now been released, but the investigation was foiled. Only the criminals themselves can be afraid of establishing the truth - and this is indirect evidence that terrorists use the prohibited weapons against civilians. But this truth is held back by the authors of a new round of anti-Syrian hysteria.

Fortunately, there are sober-minded politicians in the West. US senator, Virginia state spokesman Richard Black sent a letter to Syrian leader Bashar al-Assad, in which he thanked him and the army for the heroic rescue of Christians in the mountains of Kalamoun.

The senator also noted that the soldiers of the Syrian army are confronted by "our sworn enemy - Al-Qaeda." According to him, if President Al-Asad is overthrown, Syria will be captured by the allies of this terrorist organization.

It is a pity that not everyone in the West listens to these sober voices. Otherwise, all sorts of assistance to terrorists would have been stopped long ago, and the blood of the Syrian people would cease to flow.