Drought in China: a threat to neighbors? 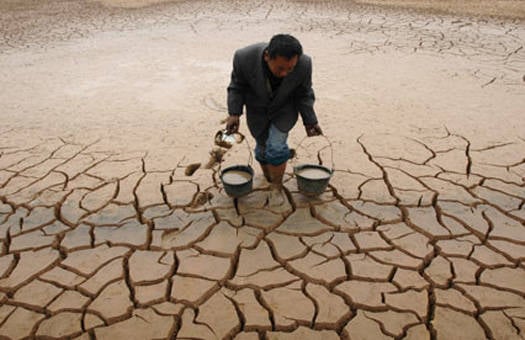 What drought in China could threaten the surrounding countries and Russia? China continues the most severe drought since 1954, covering the southern and southwestern provinces of Yunnan, Guangdong, Sichuan, and the Guangxi Zhuang Autonomous Region. In the eastern and central provinces of Anhui, Jiangsu, Hubei, Hunan, Jiangxi, Zhejiang and Shanghai, precipitation fell by 30-80%. The Yangtze River became shallow - the water level fell by 40-50%, problems with hydropower began - the Three Gorges hydroelectric power station, the PRC hydro projects, are experiencing interruptions.


And the end of the drought is not visible, meteorologists do not predict an improvement in the situation. The drought created several problems:

- people suffer from drought, for example, in the “province of a thousand lakes” Hubei, drought has been going on for six months already, since the end of the autumn 2010 of the year to the present, there has been less rainfall in the region 50% than in the same period last year. The water level in the storage facilities fell so that soon the water could no longer be used for irrigation. Food prices are rising, although the authorities are holding them back;

- direct economic damage is already estimated at more than 1 billion dollars. It may grow, the drought continues, and soon residents in central, eastern and southern China may face problems with electricity supply due to the shutdown of hydropower stations. There is already a shortage of electricity. Under threat grandiose plans for the transfer of water from south to north.


- problems of ecology, the rarest dolphins in the world are in danger of extinction, they live in the Yangtze River (their population numbers about 1000 individuals). Under the blow of a population of fish, birds and other animals.

The actions of the authorities: in Beijing, they announced plans to invest more than 600 billion dollars in 10 years into the construction of a single multi-level system of saving and distribution of state water resources. At the local level, the peasants are provided with equipment for drilling new wells, at the place of the dried ones, new ones are punched. Control food prices.

The possibility of destabilization: currently such a threat is only in the bud. Although it is clear that the "Chinese junk" is also trying to rock - there was unrest in Inner Mongolia, a series of terrorist attacks. Beijing responds to events in the Arab world and Pakistan — censorship on the Chinese Internet has been tightened, security measures have been tightened, that is, the situation is under control.

The government has significant food reserves, the authorities can control the growth of food prices with grain emissions to the market, currently there is no threat of mass hunger. Although among the population there are rumors that a natural disaster is a manifestation of Sky's discontent with China. It looks like the presentation of the Russian Christian consciousness - even in the annals of global and bloody events preceded by some natural phenomena - drought, eclipse, sea, and so on.

Is there a threat to Russia?

Even in the worst case scenario - the drought will be several years in a row, and China will face mass starvation, which will lead to social and political cataclysms. The scenario is seen traditional for the Chinese civilization - the division of the country into warring fragments, which will not be to the outside world. Of course, there is nothing good in this, but such an outcome will be caused by the policy of the Chinese elite, Russia has nothing to do with it.

There is an opinion that a wave of panic in China has been launched from outside by those who benefit from destabilization in China and the Chinese “color revolution”, which will lead to the “democratization” of China. Rumors of possible hunger - very strong weapon to stir up the crowd - you can recall one of the prerequisites for unrest in Petrograd in February 1917, or an organized deficit in Moscow, before the collapse of the USSR.
Ctrl Enter

We are in Yandex Zen
National policy in the south of China: polyethnic region is practically devoid of separatism
About the threat of wars for water and food. Root causes and problems
10 comments
Information
Dear reader, to leave comments on the publication, you must to register.