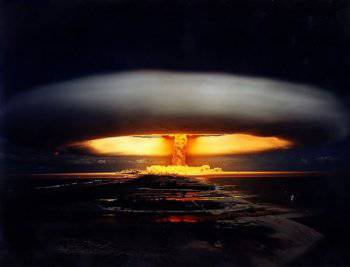 None of the sane people are already surprised, probably by the political and economic insanity created by the hands of "our elite" in the 90 of the last century.

Those who wanted to understand have long understood - there was business trade in the Motherland. Chubais, Burbulis, Gaidar and Berezovsky competed with each other - who will bite off the body of the torn country more.

But this transaction - “sale” (as will be shown later - just a gift) to a potential enemy of 500 tons of weapons-grade uranium, in terms of its cynicism and frankness of betrayal of Russia's interests, has perhaps surpassed all previous and subsequent actions of the “elitarians.

In order to confirm their complete and final enslavement of top-level managers, after that, they also concluded a scandalous in their idiocy agreement about the dumping of nuclear waste in Russia in the “Fissile Material Storage Facility”.

The containers for storing these materials were developed by the Americans (who oversees this project? Who would you think? Pentagon ....), and the Russian side, under the terms of the agreement, is not supposed to not only open containers for inspection, but even see the drawings of these containers is prohibited!

Exactly with the same success it was possible to simply bring into its territory several atomic bombs, the remote control panel of which is in the interesting department of the USA - the Pentagon.

Must surprise another. Namely, how are the patriotic public statements of the Russian post-Yeltsin authorities combined with total disregard for the most important issue of the country's nuclear safety.
Rigorous implementation of treacherous transactions, which will be discussed below - may indicate only two things - either about the dementia of the country's leadership, or about its complete dependence and subordination to the interests of more global governance.
I would not say that Americans are particularly tricky. They just never dig one hole for their partner. At least two. The logic is also simple: it is always more difficult to sleep two holes than one. Of course, two holes and dig more expensive will be. But what are the Americans paying? Cutted paper green.
If anyone does not know, then in the US, money is printed not by state, but by private banks. Individuals on special paper, with special paint and other gadgets make dollars for the American state. The American state already resells "greens" to other countries. Literally: changes the cut paper for real natural and human resources, foreign scientific and technical potential, and so on.
Secured dollar only American insolence. The material content of this world currency is number one - 4 percent.
So the Americans begin to dig the second hole immediately after the first one starts digging. In February, 1993, they entered into an agreement with Chernomyrdin on the use of highly enriched uranium extracted from nuclear weapons. And after nine months, in September, they gave birth to the second agreement - on the construction of a store of fissile materials near Chelyabinsk (Fissile Material Store) - a “piece” the size of a pair of football fields and more than 17 meters in height.

The hidden link between these two agreements is also tricky and stupid at the same time. Americans understood that they “bought” 500 tons of weapons-grade uranium for free. In the same way it was clear that it would have to be taken out in parts, otherwise it does not work, just the technology does not allow.

The deal should end in 2013, that is, twenty years from now. You never know what can happen in twenty years! But what if it is not a puppet president, but a nationally oriented president who will come to power? He will immediately begin to fill the first pit!

Immediately after the inauguration, such a president will stop the export of nuclear ammunition abroad. So, it is necessary to force a hypothetical patriot in the presidential chair not to do this. That is, it should be governing. The second pit - Fissile material storage.

You can measure this hole in meters, in kilometers, in dollars, as well as in the fate of Russia. Today, for example, nuclear specialists with counterintelligence bias, it is clear that the Chernobyl disaster was not an accident, but a sabotage. It is likewise clear that the Fissile Material Storage Facility near Chelyabinsk is not the stupidity of Russian production, but the next possible diversion of the American special services.
The take-off weight of an ordinary Tu-154M passenger aircraft is one hundred tons. The take-off weight of the Boeing-767 type aircraft that rammed the south tower of the World Trade Center in New York, depending on the modification, is from 143 to 184 tons. And the worst impact from which the storage of fissile materials near Chelyabinsk is protected is the fall of an aircraft weighing up to 20 tons, flying at a speed of 200 meters per second.
The repository of Fissile Materials is only estimated at a cost of 1 billion 200 million US dollars. One third of this amount is paid by Russia, and two thirds by the United States.

Although, according to the logic of cooperation, the Americans have a specialized department. US Department of Energy. It also knows how to safely store nuclear materials, right? ..

But at the Pentagon they know better how to blow up nuclear materials. The design documentation for the Fissile Material Vault states that the transport containers for the transport of nuclear ammunition will be manufactured by the Americans. And there, in the storage facility, these containers will in no way open and transfer weapons-grade uranium and plutonium to other special containers, as is always done in all five nuclear powers - permanent members of the UN Security Council.

American containers cannot be opened even if they see something suspicious while scanning at the control point inside the containers!

In this case, the container with the nuclear filling and everything else will simply be sent back to the supplier.

On this occasion, the note of the NIIAC “Strategy of the Future” stated the following:
1. The order of storage of fissile materials for nuclear ammunition, which will be installed after the completion of the construction of storage facilities at Mayak in Chelyabinsk on 100000 storage cells (4 25000 line) and then in Tomsk-7, is dangerous for Russia. On the US side, the US Department of Defense is in charge of the work and funding.
2. The danger is this:
1) The collection in one or two places of the entire stock of fissile materials in Russia, in which the possibility and likelihood of sabotage to eliminate these materials is very high.
2) The direct detonation and elimination of fissile materials can be performed in several ways:
a) since the Agreement imposes a ban on the inspection of storage containers made in the USA (contrary to the requirements of GOST), the possibility of laying in the containers is not excluded:
- conventional explosive ammunition with remote or other fuses;
- miniature nuclear munitions with a critical mass of californium fissile material of about 1,5 gram;
b) the construction and commissioning of the above two storage facilities does not preclude the production by the US Department of Defense of the practical elimination of the Russian stock of fissile materials in these storage facilities:
- pulsed, explosive or other other effects of a powerful neutron flux, including as a result of an air explosion of low-power neutron ammunition;
- gamma flux with a power not lower than 14 mega-electronvolt beam (laser) weapon.
3. The order of storage of Russian fissile materials according to plans and under the administration of the United States is a threat to the national, military, environmental and other types of security of the Russian Federation.

By the way, 20 000 US containers for Fissile Material Storage have already been manufactured and delivered to Russia. What is in them - none of ours knows and has no right to know. Even container drawings for the Russian side are a big American secret.

There were quite a lot of people who understood why Americans need such a nuclear facility just in the middle of the Russian Federation.

The Americans were well aware, for example, that Yuri Vishnevsky, who had himself created the Gosatomnadzor under the Soviet regime and who sees the “blotter” through, would never agree on the Chelyabinsk sabotage project. Therefore, as far back as 1995, by his decree No. 350-rp from 26 in July, Boris Yeltsin removed Gosatomnadzor from the examination of the Fissionable Materials Store.

There was also the problem of the Ministry of Natural Resources. By letter no. 11-25 / 168 from 21.03.95, it refused to issue an approval for the Fissile Material Vault project. For environmental reasons. The letter was signed by the head of Glavgosekspertiza VN Lopatin. It seems that everything, the construction of “blotter” should be stopped.
But the Americans again went trump ace. In violation of Russian legislation, Yeltsin gave the command to the Minister of Atomic Energy personally: Build a Fissile Material Storage Facility! Without any coordination!

For our part, the closed parliamentary hearings of the ninety-seventh year on the uranium transaction were a strong move. You understand that, dear fellow citizens, such events do not happen by chance. This is also necessary for the relevant State Duma Committee to be connected, for the State Duma Council to take a decision ...

That is, there should be at least one person who would understand the problem himself and explain to the others. In the Duma, Vladimir Volkov, Deputy Chairman of the Committee on Defense, turned out to be such a person. A commission of representatives of the five committees of the State Duma, which was headed by deputy Ivan Nikitchuk, went to Maximov to Novosibirsk, dug up a bunch of documents in the departments concerned, and put everything to the deputies together.

Then this figure surfaced - 8 trillions of dollars, the real value of Russian weapons-grade uranium.
Then there was the Federation Council Decree No. 51-SF of 29 in March 2000. In the Federation Council, the person who figured out himself and explained to the others was the governor of the Ryazan Region, Vyacheslav Lyubimov.

After that, the Security Council woke up. Sensibly, thoroughly and objectively conducted an examination of the documents received. They came to a positive conclusion. And by letter No. А21-2814 from 30 of December 1997, Maximov was notified that his question was put in the draft work plan of the Security Council and the Scientific Council under the Security Council.
But that was all stalled.

The repository of Fissile Materials is completed and commissioned.

The criminal bargain for the sale of the uranium weapons to our “most loyal” friends, the United States, concluded under Yeltsin, was strictly carried out under Putin and Medvedev.

And so, during the "uranium transaction", on 31 in December 2008, Russia sold in the USA - 352,3 tons (from 500 tons agreed) of highly enriched weapons-grade uranium in a low-enriched form. The transaction is executed on 64,4%.
Whatever Jude is saying behind this deal and justifying this wild betrayal of national interests, this wild blow to national security,

For the information of those who still doubt the meaning of this betrayal of the century: produce only 550 and weapons-grade uranium.

It is an open question for us what the Americans are doing with their uranium being removed from their dismantled nuclear warheads? And how does this process control Russia ??

But despite all the protests of the public, deputies of all levels, the military, scientists, and other public figures - this “deal” has retained its strength to this day.