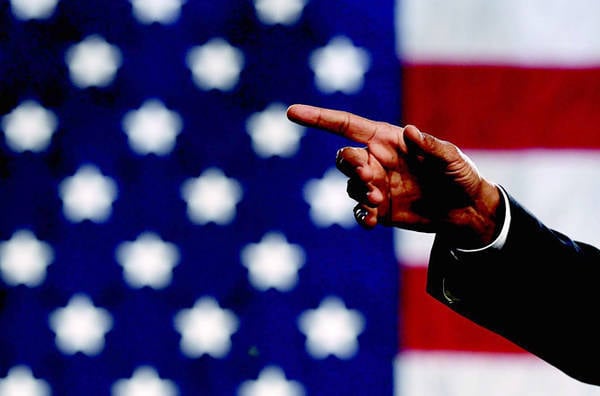 All sorts of sanctions against Russia, which the Obama administration is intimidating today, can only be a diversion. Present economic weapon only the US Treasury Department has it: it can cause real damage to the domestic economy.

This is the Foreign Account Tax Compliance Act (FATCA, Foreign Account Tax Compliance Act), which is due to enter the final phase of the July 1 2014. A small chance to sign a “soft” version of the FATCA agreement with the United States remained even after Washington declared termination of negotiations in March against the background of the Ukrainian events and the entry of Crimea into Russia. However, on the eve of the Assistant US Treasury Secretary Daniel Glaser said he is not going to resume negotiations on the accession of Russian banks to the US tax information collection regime (FATCA). “The US Treasury Department at this stage does not intend to resume negotiations with Russia,” the official said, speaking to the Senate Committee on Foreign Affairs at a hearing on the situation in Ukraine.

1 July is not far off, which means that a “tough” version of the FATCA agreement may begin to apply to Russia. So why is this law so terrible for Russia? The professor, the doctor of economic sciences, the chairman of the Russian Economic Society named after. S.F. Sharapova Valentin Katasonov:

- Recall that in the US 2010, a law was passed on the taxation of foreign accounts. English abbreviation of this act - FATCA (FATKA). The law was adopted in order to increase the efficiency of tax collection, to prevent tax evasion into the American treasury from those individuals and legal entities who are outside the US, have their business abroad, open accounts in foreign banks. According to American law, citizens and companies of the United States (or with the participation of the capital of American legal entities and individuals) are required to pay taxes to the American treasury, regardless of their location. This law has a pronounced extraterritorial nature, that is, its action affects not only legal entities and individuals in the United States, but also legal entities in other states.

Specifically, we are talking about banks (as well as other financial organizations - insurance companies, funds, brokerage firms, and so on) of other countries, which, according to FATCA, should report to the US Tax Administration (IRS) about their clients, if they belong to the US taxpayers. The FATCA law was enacted in stages. Since 1 July 2014, the final phase of the introduction of the law begins. From this point on, non-US banks are obliged to submit all necessary information about their customers that fall under the definition of “US taxpayer” to the US Tax Service. Banks that fail to comply with this requirement or will provide corrupted or incomplete information will face US sanctions. First of all, these are penalties in the form of withdrawal of significant amounts from the correspondent accounts of such organizations in US banks, as well as automatic withholding of 30% of the amounts of any financial transactions of such banks passing through the US banking system. And since a huge number of transactions are carried out in US dollars, such operations will inevitably pass through the US banking system. Consequently, the effectiveness of sanctions against banks violating the FATCA law, as envisioned by the authors of this act, will be high. This is a "hard" version of the FATKA.

Washington also offered other countries a softer option as an option. He assumes that banks in other countries do not interact directly with the United States Revenue Service, but deal with the tax services of their countries. And the latter, in turn, provide consolidated information to the United States Revenue Service. The second option provides for the conclusion of an interstate agreement between the United States and the country concerned. As part of the "soft" option, in turn, there are also two options. One option assumes that tax information is exchanged on a reciprocal basis, that is, other countries can also receive information on tax evaders who keep their money in US banks and / or conduct operations through US banks. This is the so-called symmetrical version of the agreement. But there can also be an “asymmetrical” variant, in which only the tax service receives the necessary information from another country.

Most countries in Western Europe have already signed FATCA agreements with the United States. In fact, they resigned themselves to the fact that bank secrecy ceased to exist in the Old World. Many other countries are at different stages of preparing similar agreements. According to some reports, by the end of this year, the total number of countries that have signed the agreement may reach fifty. The United States Revenue Service has recently published a list of countries with which negotiations are underway to fulfill the FATCA conditions and to which the sanctions will not apply until the end of the year. These are fifteen states: Australia, Belgium, Brazil, the British Virgin Islands, Jamaica, Kosovo, Latvia, Liechtenstein, Lithuania, Poland, Portugal, Qatar, South Africa, South Korea, Romania.

- What is the reaction of Russia to the introduction of FATKA?

- At first, the Russian Federation declared that this law constituted a gross encroachment on the sovereignty of our country. Then there was a rather long pause. Our banks began to worry, sending their requests to the Bank of Russia, the Ministry of Finance and the Russian government. Some banks, without waiting for the decision of the authorities, began to prepare for the "hard" option, starting the purchase of the necessary software and organizing training for employees to work in a "hard" option. The thing is, by the way, not cheap: counting on one bank - no less than a million dollars. In 2013, the Russian Ministry of Finance announced that it had begun to prepare an agreement with the United States, that is, there was a hope that our banks would work under the conditions of a “soft” option. The Ministry of Finance has repeatedly stated that the agreement will be signed at the beginning of 2014. True, the Ministry of Finance did not disclose the details of the agreement. It was not even known whether this agreement would be “symmetrical” or “asymmetric”. The document was prepared in strict secrecy. A number of experts expressed great hope that the agreement would be “symmetrical”. In this case, Russia could turn the original evil in favor. The FATCA agreement could be an effective tool to prevent capital flight from Russia to the United States. However, judging by some signs, our "offshore aristocracy" was very worried that a "symmetrical" agreement would deal her a death blow. There was active lobbying for an “asymmetric” version of the document.

The events that began in Ukraine at the end of 2013 and continued in 2014 have had a strong influence on the preparation process for the signing of the Russian-US agreement on FATCA. He slowed down. And in March, after Crimea became part of the Russian Federation, Washington declared that in general it would cease negotiations with Moscow regarding the signing of the FATCA agreement. What is the reaction of the Russian Ministry of Finance to a similar demarche? He urgently drafted a bill defining the mode of operation of Russian banks starting from 1 July 2014, that is, taking into account the operation of the American FATCA law. Judging by some “leaks” of information, the bill grants Russian banks the right to directly transfer information about their clients to foreign tax services. He hopes that the State Duma will pass the law before the end of the spring session. The draft law will consist of amendments to the Civil Code of the Russian Federation, laws on banking secrecy and personal data. Now banks can transfer customer data without their consent to a limited circle of people, and foreign tax specialists are not included in this circle. On the bank sidelines, a similar reaction of our authorities to American demarches is described as “surrendering positions without a fight.”

Some experts argue that Russian banks will be able to avoid the sanctions provided for by FATCA, using a proven scheme - opening correspondent accounts not in American but in European banks. Now this method does not work. After all, European banks become agents of the United States Revenue Service (IRS), and they must automatically implement penalties for their banking partners. That is, non-US banks become not only agents acting in the interests of the IRS, but also agents for the implementation of US sanctions on banks that Washington considers to be violators.

The United States Revenue Service warned that Russian banks would have a chance to avoid sanctions if they had registered themselves on the IRS website before 5 in May and received an identification number (GIIN). Starting from 1 July, this number should be shown to all counterparties - FATCA members, so that they do not undertake any penalties in relation to the registered bank.

A number of Russian bankers have already expressed their concerns that the direct interaction of Russian banks with the US Tax Service makes them very vulnerable. If desired, the American tax authorities can always find violations in the actions of Russian banks and take sanctions against them. The threat of US sanctions in connection with possible violations of FATCA by Russian banks is perceived as a real threat, even more real than the threat of blocking VISA and Master-Card payment systems. In early April, a meeting of the “financial twenty” was held in Washington. Russian Finance Minister A. Siluanov arrived at the meeting. The media reported that Siluanov had a conversation with the US Treasury Secretary. The Russian minister tried once again to persuade his American counterpart to return to negotiations on the signing of a bilateral agreement on FATCA.

The Russian media then appeared statements by officials of the Ministry of Finance of Russia, that in the current situation, we are also preparing a law similar to the American FATCA law. It seems like we are preparing "our response to Chamberlain." However, the Russian Federation has no real levers of pressure on foreign banks (primarily US banks). Experts rightly noted that such a law should be considered as a purely political action.

Some experts point out that of the entire spectrum of Washington’s sanctions against Moscow, the mechanism of sanctions against Russian banks, created on the basis of the FATCA law, may be the most painful for Russia. And for the effective protection of Russian banks from the American FATKA law, a radical restructuring of the Russian financial and banking system is required. But unfortunately, our government is not ready for such radical steps.

Ctrl Enter
Noticed oshЫbku Highlight text and press. Ctrl + Enter
We are
FATCA factor. How can American law relate to any RussianBrzezinski: "Russian officials are holding in the US 500 billion dollars of their own funds!"
Military Reviewin Yandex News
Military Reviewin Google News
154 comments
Information
Dear reader, to leave comments on the publication, you must sign in.