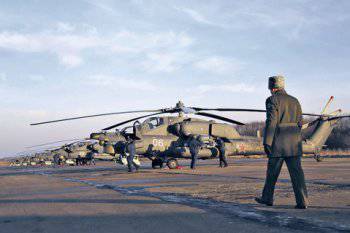 According to the "Independent Military Review"15th Army Brigade aviation, which is deployed at the Veretye ​​airport in the Ostrovsky district of the Pskov region, received 21 Ka-52 Alligator helicopters. This was announced by the representative of the Western Military District, Colonel Oleg Kochetkov.


“The crews of the Ka-52 helicopters have begun scheduled training flights,” noted Kochetkov.

The newest all-weather combat helicopter Ka-52 "Alligator" is able to conduct effective combat operations at any time of the day. It is based on a significantly modified two-seat modification of the famous Ka-50 “Black Shark” attack helicopter. Its main purpose is the destruction of low-speed air targets, armored and unarmored ground targets, enemy manpower, and reconnaissance operations.