Ukraine: I grieve, but I do not understand 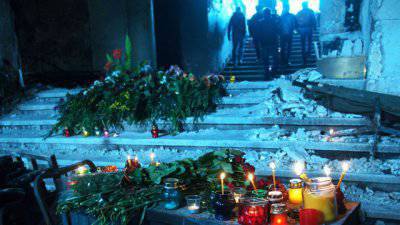 I see the same thing that any Russian sees: murder, humiliation, lawlessness. But the farther, the more everything that happens causes me to be perplexed and not understand.


As a normal person, I deeply mourn everyone who died in Ukraine. Especially those who died for a just cause. And I hope that the time will come when the executioners and murderers will respond in full to the people. I hope so far.

It is not clear to me how many more good people should perish so that it will come to the people that everything cannot continue to wait? Unfortunately, the best ones die, those who are ahead. I do not understand a few points that I would like to voice.

Why 20 000 freaks spend ATO on the territory of Donbass? Why doesn’t everyone care? The simplest arithmetic: Donetsk and Lugansk regions are 7 of millions of inhabitants. One out of a hundred who fought is an army in 70 000 people. I note, warring not for 1300 hryvnia per month, but for their land.

Where to look for in the end these fighters against terrorism? Theoretically - in the fields and forests. But in practice, alas, is different. In practice, the so-called “Army of the Southeast” successfully opposes the army and the National Guard under, and that’s all.

Often complain that there is little weapons. "Now if we were given, we would go." At the same time, our channels show Lugansk, where for some reason everyone is armed at checkpoints. Yes, not AK, but also from the Great Patriotic War. I myself have seen the Mosinki, PPSh, and PPS. Older? Maybe. But quite comparable. Fighting is not a weapon, but a man, whatever one may say. There would be a desire. And about the trilinea just keep quiet. She does not know what a bulletproof vest is, therefore she ignores. Any. Will fly.

And it turns out that in Slavyansk, where the so-called "Terrorists", pulled all the forces of the junta. Who can not really do anything with these terrorists. Yes, and not really torn. Because you can really get a bullet.

But in Mariupol or Odessa, you can roam in full. Because there they will meet at best, in short. And barehanded.

I hurt a lot. Is it not clear that these are not people? What will they kill, because they are paid for it Kolomoisky, Poroshenko and others? And they kill. With impunity, reveling in this. And then the words in the camera: "How could they, we left without a weapon?"

I am a normal person, I look at it with a knife over my heart. But I look. But it has long been clear to me that it is precisely because without weapons that everything happens. If they knew this trash, that they would meet the trunks - it would hardly have been so brazen.

Not everyone, fortunately, relies on the power of words and empty hands. In Kramatorsk there was an 8 in May; for some reason, the media got around. The self-defense patrol headquarters received a signal that the sniper seemed to be sitting on the roof of the 14-storey building. Patrol by car arrived very quickly. They climbed to the roof - and the truth is, a sniper. It's getting cold already. Apparently, he slipped and fell three times on the knife with his back. The knife in the back remained. And a rifle near. And silence.

Another incomprehensible to me aspect. Take the same Slavyansk or Kramatorsk. Especially Kramatorsk. In spite of everything, people go to work every day. On the plants owned by Taruta, Akhmetov, Kolomoisky. And every day they bring hryvnia to the owners, for which the above-mentioned gentlemen buy mercenaries, pay the National Guard, buy everything they need. That is, they continue to finance those who shoot at their own relatives, relatives, and acquaintances. Nonsense, to be honest.

Slavyansk. City under siege. The city is blocked. They are fighting. What do you think in factories? Slavtechmet, Remtyazhmash, Gennlikh Ukraine, Donmetsplav? Yes, both worked and continue. Let everything collapse, and we will thresh. So?

I had the imprudence to ask such a question to one factory worker from Tehmet. Accidentally met online. The policy is simple:

“I cannot participate in resistance because I have to work. If I don't quit, they'll fire me. They will dismiss - it is difficult to find a job, therefore they will manage without me. ”

I was stunned. But what about Bandera? What about language? Independence?

“Well, there guys are fighting the same,” was the answer.

I have a break of reality in general. But what about the referendum? Well you voted against those for whom you are working? What then is your referendum worth?

“Well, I do not know, it will be seen there. No, independence is needed, there is nothing to feed goats in Kiev. But work is also needed. ”

I looked at a lot with different eyes. Indeed, why not go to a referendum? The output is the same. On weekends, you can vote for independence. And on Monday we have to work again. And let them shed blood, who have no other business. Who does not think about tomorrow? And really, what do they think? Every day they can be the last.

To my great regret, he is not alone. They are, as practice shows, millions in the territory of Donbass. Which is actually a damn what it will be like tomorrow. Will work - this is important. And by whom - Akhmetov, Taruta, or, for example, Tsarev, who also breaks into power - it does not matter. The main thing is that it will be tomorrow.

For me, it was not a revelation when today Turchinov announced the termination of subsidizing production. No money left. Hello, the Russian nineties in Ukraine! What will happen next - we know. A wave of bankruptcies and a ransom for the cheap plants of the junta’s friends. So what is next?

I will give this example. In those very years, in Voronezh, the Philips company bought a large plant called “EVP”. Kinescopes for TV, he released. All were delighted, right now trample! There will be our "VELSy" with "Filipkovskaya" stuffing! Cool!

And the plant stood on the reconstruction of 7 for years and was sold back ... for the 1 dollar. But by this time the VELS remained without kinescopes. And we were left without two factories and with a bunch of people on the street.

For me, now a lot of questions. Does he need a referendum? Does independence need such people? No answers yet.

I understand Pushilin, who immediately after the declaration of independence was asked to join the alliance with Russia. There is no other way out. And it cannot be, for as V. I. Ulyanov said a long time ago, "every revolution is only worth something if it can defend itself."

Who will protect this revolution? Again, shooters and comrades? Five thousand from all over Ukraine (and not only Ukraine) will protect 7 (seven) millions?

The picture is ugly, to be honest. Even taking into account the fact that the troops, still loyal to the junta, do not seek to break their foreheads against the army of the Southeast. Who will throw this trash from the land of Donbass? Who will guard the borders of the unrecognized republic? Who will bring order to this long-suffering land?

Looking east again? Waiting for the Russian army again? And yourself?

I do not claim to be the cleverest and understanding. Therefore, I ask such questions. I do not understand much in this situation. There are people much smarter. For example, Putin.

Ctrl Enter
Noticed oshЫbku Highlight text and press. Ctrl + Enter
We are
Situational analysis of the death of the MH17 flight (Malaysian Boeing 777), made on the basis of engineering analysis from 15.08.2014The fight against terrorism. An inside look (blog of Ingushetia special forces)
Military Reviewin Yandex News
Military Reviewin Google News
229 comments
Information
Dear reader, to leave comments on the publication, you must sign in.