India and Vietnam will get ten Russian fighters 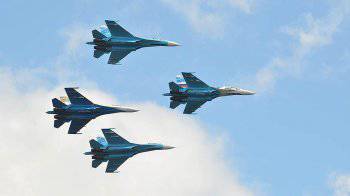 According to the newspaper KommersantIn the second half of 2014, the United Aircraft Corporation (UAC) enterprises will deliver four Su-30MK2 Vietnam fighters and six MiG-29К / India cube. In addition, export contracts for this year provided for the delivery of the first batch of Su-30K Angola fighters, but it was transferred to 2015 year due to the need to repair and modernize the aircraft.


According to a source close to the Rosoboronexport Russian weapons exporter, in the case of Vietnam, Russia will begin to execute the previously concluded contract, and in the case of India it will continue execution.

The publication notes that Vietnamese aviation The contract for 12 Su-30MK2 was signed in August 2013. Vietnam Air Force will receive the remaining eight Su-30MK2 fighters in 2015.

The contract with India was concluded in March 2010. It provides for the supply of 29 aircraft. According to Sergey Korotkov, director general of the RSK, the customer received the first seven MiG-29К / Cube in 2013 year.

The contract with Angola for the supply of Su-30K, previously used by the Indian Air Force, was signed in October 2013.

Ctrl Enter
Noticed oshЫbku Highlight text and press. Ctrl + Enter
We are
The RAC "MiG" are working on the concept of the fifth generation fighterMiG-29K fighters performed night flights from the Vikramaditya aircraft carrier
Military Reviewin Yandex News
Military Reviewin Google News
22 comments
Information
Dear reader, to leave comments on the publication, you must sign in.