The situation in the south-east of Ukraine. Chronicle of events 11 May 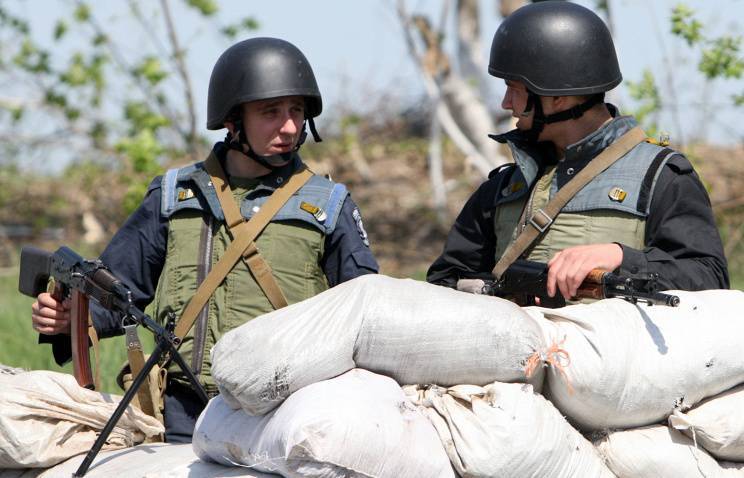 21:35 During the fighting in Krasnoarmeysk, Donetsk region, the soldiers of the National Guard killed a civilian.
21:30 Locals write in social networks that “national guardsmen” arrived in Krasnoarmeysk on ten civilian vehicles and shot from an automatic weapons random passers-by. There are dead and wounded. Krasnoarmeysk is located on the border of Donetsk and Dnepropetrovsk regions, in 70 kilometers north-west of Donetsk, reports "Reedus". 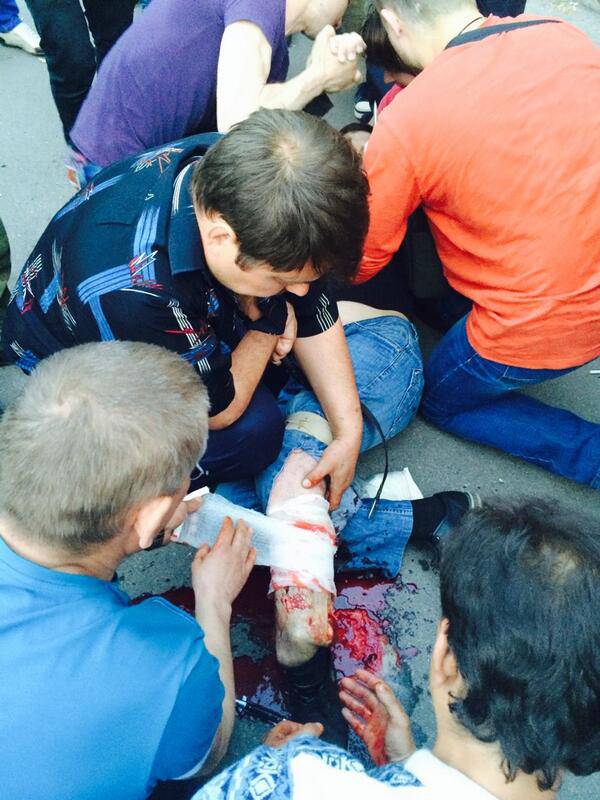 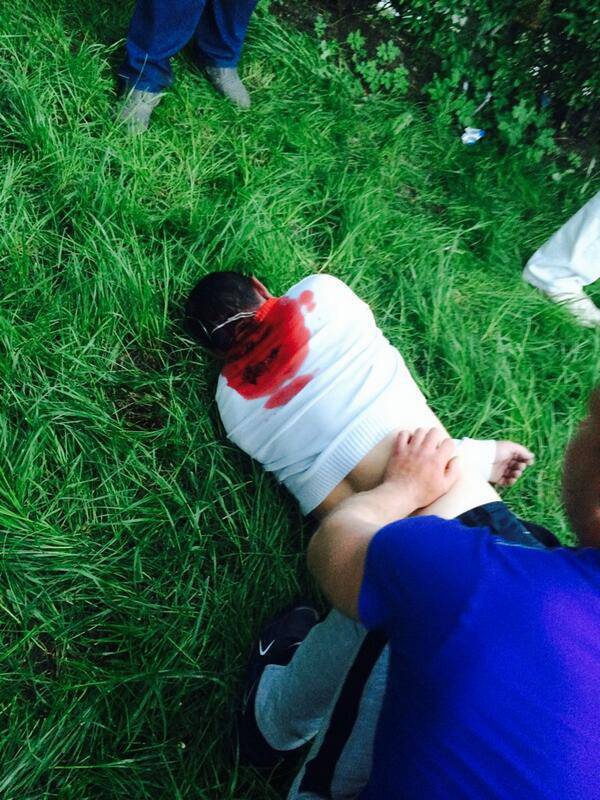 19:42 Information from Igor "Strelkova":
Red Lyman:
"Everything is fine. My Red Liman company is there, guarded. Turnout rolls over. "
Konstantinovka:
"Good news - in Konstantinovka 2 BRDM (reconnaissance armored vehicles on wheels with large-caliber machine guns - RV) my eagles captured. Eh, let's get through! ”
Krasnoarmeysk:
“Krasnoarmeysk, alas, is not under our control. By the way, at the beginning of 1943, my grandfather, Ivan Konstantinovich Runov (at that time, a junior lieutenant, commander of a company of machine gunners), spent a week there surrounded (after Manstein’s counterstrike). Dropped the remnants of the battalion. Out with a single cartridge in the TT. And, by the way, a whole mountain of rocket launchers from 1941 to 1945 a year was found in the Ukrainian warehouse. Even a couple of lend-lease caught. The flare guns are actively used here - in the Ukrotsky army there are no one-time lighting rockets in principle - they are forced to light the area with signal rockets, poor creatures ... ”
18.34 Krasnoarmeysk became the first city in the Donetsk region, in which voting in the referendum was completed and polling stations were closed. The reason for the closure was the threat to the lives of voters and election officials from the so-called National Guard. Turnout at the sites was 77,08%.
18.01 During the punitive operation, the Ukrainian security forces seized the premises of four schools in Krasnoarmeysk, where the polling stations for voting on the status of the Donetsk region were located. The building of the Krasnoarmeysk City Executive Committee was captured and blocked by radicals, allegedly members of the so-called National Guard.

17:11 Ukrainian media have announced the seizure of ballots by the National Guard under Krasnoarmeysk.

16:56 Armed people seized the city council building in Krasnoarmeysk, Donetsk region, where the territorial election commission for the referendum is located, RIA Novosti reports.
The invaders blocked the voting process, the Co-Chairman of the Donetsk Central People’s Election Commission Roman Lyagin said. He noted that since the beginning of the voting, a high turnout was observed in the city and a large percentage of people managed to vote.
In addition, according to him, information was received on the possibility of armed provocations in Kurakhovo near Donetsk. To ensure the safety of the place sent militia DNI.
16:31 Supporters of federalization announced the arrest of a candidate for the presidency of Ukraine, Oleg Lyashko. This was announced by the representative of the militia at a rally outside the building of the Mariupol City Council.

16.30 After the referendum in the Donetsk People's Republic, its organizers plan to hold a congress of deputies of all levels in the Donetsk region and begin a “civilized divorce” with the Kiev authorities. This was told by the coordinator of the CEC of the DPR and the co-chairman of the DPR presidium Boris Litvinov. 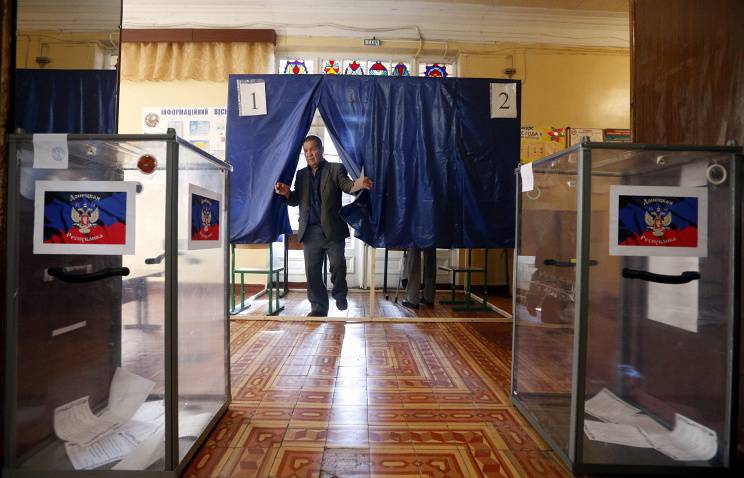 16.06 Dialogue with the Kiev authorities is theoretically possible, but only with the participation of intermediaries. This was told by the co-chairman of the government of the proclaimed Donetsk People's Republic (DPR) Denis Pushilin, noting that by their actions the Ukrainian authorities "themselves categorically narrow the corridor for building any dialogue."
16.04 The turnout at a referendum in Lugansk, according to the latest data, exceeded 75%.
At the referendum in the Donetsk region, turnout "has passed for 50%". According to the CEC of the proclaimed Donetsk People's Republic, in some areas this figure reaches 65%.
15.55 MSK Ukrainian security forces continue the operation in Krasny Liman, Slavyansk and Kramatorsk. As the acting head of the presidential administration, Sergey Pashinsky, stated, "eight task forces within the framework of the" operation "destroyed roadblocks" and a group of militiamen.
15.03 The referendums held in the Donetsk and Luhansk regions are illegal and have "neither legal nor actual consequences," said Pavlo Petrenko, appointed by the Verkhovna Rada, Minister of Justice of Ukraine. The Foreign Ministry also noted that the referendum in the eastern regions "will not have any legal consequences for the territorial integrity and structure of Ukraine."
14.48 MSK Ukrainian security officials blocked the delivery of ballots in some areas to vote in a referendum on the status of the Luhansk region. As a result, it is not possible to hold a referendum in the Belovodsky, Markovsky, Svatovsky, Melovsky and Troitsky districts, said before. Regional CEC Alexander Malykhin.
14.06 Communication with the city of Krasny Liman in the Donetsk region has been restored, and there is nothing threatening the holding of a referendum in the city, said a member of the election commission of the proclaimed Donetsk People's Republic, Sergey Tretyakov.

13:42 In the building of the city council of Mariupol, Donetsk region, a fire re-emerged, reports the local online edition 0629.ua. "There are no fire trucks near the city council. The fire is visible from the windows on the 4 floor of the building. There are onlookers next to the mayor's office," the newspaper said. According to him, the causes of the fire are unknown, there are no data on the victims.
13:30 In the Luhansk region in the city of Novoaydar (60 km north-east of Lugansk), the territorial election commission is being evacuated, where the soldiers of the National Guard arrived and staged a rout. This is reported by Interfax.
“The territorial election commission of Novoaydar is conducting an emergency evacuation,” the referendum election committee’s coordinating council told the agency.
The agency’s interlocutor noted that “at first, the soldiers of the National Guard under the BTR blocked the entrances to the polling stations, and then defeated the territorial election commission of Novoaydar”.
13.17 Voting at the referendum sites in Donetsk and Mariupol is calm. There were no provocations and clashes, member of the Public Chamber of the Russian Federation Georgy Fedorov reported, citing information from observers cooperating with the OP in these cities of the Donetsk region.
13:16 And about. the head of the presidential administration of Ukraine, Sergey Pashinsky, said that the military operation in the area of ​​the cities of Krasny Liman, Slavyansk and Kramatorsk in the Donetsk region by the Ukrainian security forces had moved to the final stage. “The antiterrorist operation in the Krasny Liman, Slavyansk, Kramatorsk regions is in the final stage,” he said at a briefing on Sunday in Kiev.
According to the representative of the Kiev authorities, "during the operation, many separatists were killed." At the same time, Pashinsky did not name any specific data on this account.
12.40 Turnout at the referendum in the Donetsk region "has already exceeded 30 percent", said the chairman of the Central Election Commission of the proclaimed Donetsk People's Republic Roman Lyagin. According to him, at noon the level in 35% can be reached.
11.47 There is no connection with the two territorial commissions in the city of Krasny Liman, where, according to preliminary information, the militia are clashing with the Ukrainian security forces involved in the punitive operation.
11:20 Turnout at a referendum in Lugansk on 11: 00 Moscow time "amounted to about 22%". About this correspondent. ITAR-TASS reported to 11 in May by a representative of the Lugansk press center on referendum issues Vasily Nikitin.

10:55 The provocateurs tried to take away ballots from voters at one of the polling stations in Lugansk, RIA Novosti reports.
The attempt of provocation was noted at the site in the Lugansk National Pedagogical University. The militia stopped an attempt to interfere with the voting and are investigating the incident.
9:52 In the Donetsk and Lugansk regions opened polling stations in the referendum on self-determination. Voting will take place in the context of the ongoing force special operation of the Kiev authorities in the east of Ukraine.
09:35 On the outskirts of Donetsk Slavyansk, shortly before the start of the referendum on self-determination, shooting rang out. Shots and explosive shells are heard in the area controlled by the supporters of the federalization of the Feed Mill. The city is still blocked by Ukrainian security forces, reports RIA Novosti.
04:51 A couple of kilometers from Slavyansk, the DPR troops occupied the mountain Karachun. The Donetsk Republic has a fleet based on a helicopter seized from the Ukrainians. The battle, about which our correspondent reported earlier - turned out to be an operation to seize the village of Andreyevka with pro-Russian forces.
3:11 A green rocket took off near the village of Chervony Molochar, on the outskirts of Kramatorsk to Slavyansk. He fired a heavy machine gun from the post at the ascent of the mountain. For half an hour, short shooters occur occasionally, there is no active action. 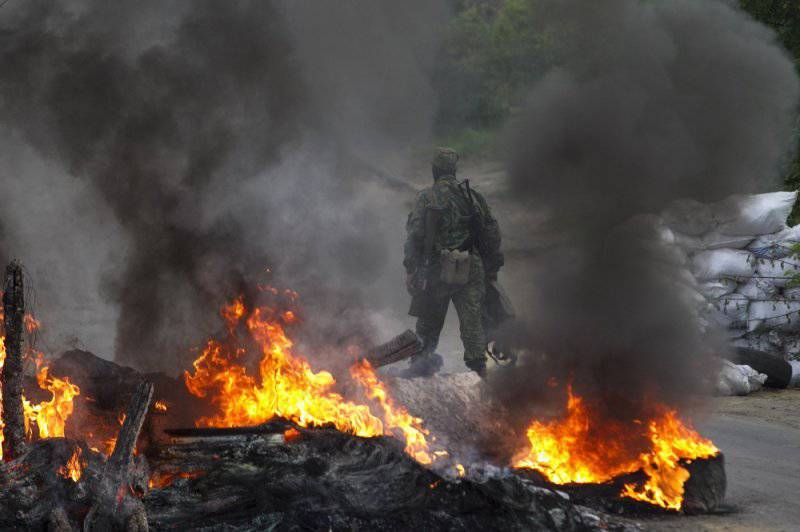 2:05 Militia enters into battle BMD.
2:35 Over the Andreevsky checkpoint two lighting flares took off.
2:27 Machine-gun bursts are heard.
2:21 No shooting. Both sides are regrouping.
It all started with the shelling of the roadblock, which is located at a railway crossing, where the militia installed several freight cars, blocking the road to the city. Breaks in mortar shells and shells rang out every 20-30 seconds.
To save the fighters at the checkpoint, the militia reconnaissance group attacked Mount Karachun, where the enemy artillery is based.
2:16 Yellow rockets took off on the Rybkhoz.
2:07 At times there is a lull, as now. Half the television channels stopped working. Looks like a damaged tower. On the other side of the front: “They are fighting there. They are fired from ATGM and machine guns. In addition, snipers are working who shoot explosive bullets,” the National Guard soldiers who guard the TV tower reported.
“The fight is hard, there are no more details yet,” he added.
1:56 Artillery guns are being fired at roadblocks. The militia is returning automatic fire. The battle began in the area of ​​Andreevka and moved closer to the city. Intense automatic shooting. Work large-caliber machine guns. Part of the mobile operators has stopped working. 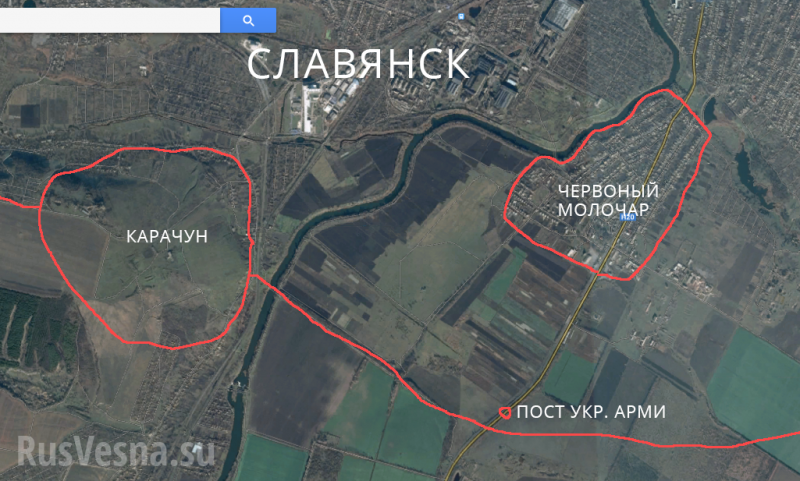