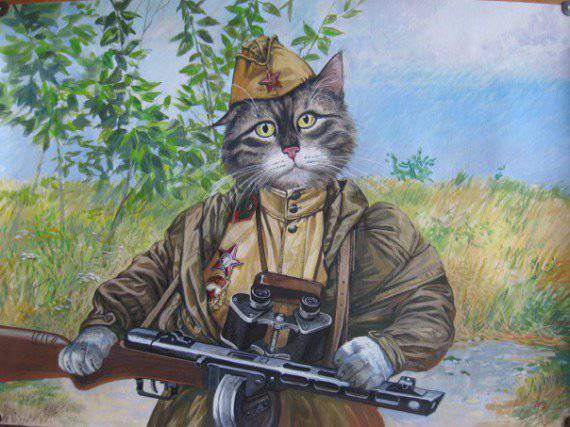 It happened in Belarus. Summer 1944 of the year. Through the burnt village, advancing on the heels of the advancing army, was a battery MZA. 37-mm anti-aircraft guns kept then the most dangerous range of heights - 2,0 - 3,0 km, securely covering ferries, airfields and other important objects.

A short halt on the ruins of the village. Thank God - the well is intact. Time - barely collect flasks and rewind footcloths. The only living soul was squinting in the sun on the remains of a burned log house. And that soul was a red kitten. People either died long ago, or left, out of harm's way ...

An elderly foreman dokurivaya cigarette, looked at the kitten for a long time, and then took it and put it on irradiation. Fed the rest of the dinner, like a cat Ryzhik and declared him the seventh fighter calculation. With a hint of the future glory of the murderer of mice and other neglect in the locations, and especially in the dugouts. The gray-headed lieutenant didn’t mind either, so Ryzhik caught on the battery. By winter, he grew up in a healthy red kotyar.

During enemy raids aviation Ginger disappeared, it is not known where and was born only when the cannons were sheathed. Then, a particularly valuable feature was noted behind the cat. And this peculiarity was noticed by our foreman - half a minute before the raid (and before you leave) Ryzhik growled muffled deafly in the direction from which enemy planes would appear. Everything turned out so that his house was mistakenly or purposefully bombed by German aircraft. And the sound that brings death, he remembered forever.

Such a rumor was appreciated by the entire battery. The rebound effectiveness of the enemy’s thinning attacks has grown by an order of magnitude, exactly like Ryzhik’s reputation. In the face he received immediately a signaler of the regiment, who tried to kick an animal that was tangled under his feet. 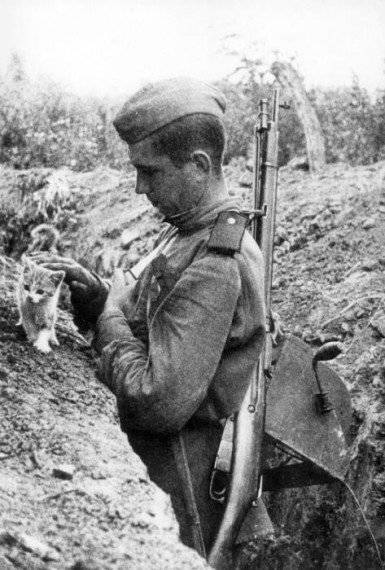 During the war, it never occurred to anyone to send to the acting part an inspector on the cleanliness of spins and greenness of grass, for this reason Ryzhik lived to the 45 year of April, before his high point.

In late April, the battery rested. The war died down and came to an end. Behind the last Fritz, there was a real hunt in the air, therefore, the MZA air defense battery simply enjoyed the spring sun and Ryzhik shtykh in the open air, excluding the legal meal time.

But here, ain seconds, and Ryzhik wakes up, gives wool on end, needs attention and roars strictly to the east. Incredible situation: in the East, Moscow and other rear. But the people are servicemen and trust the instinct of self-preservation. 37-graph paper can be brought into the combat position of the marching for 25-30 seconds. And in this static case, in 5-6 seconds.

Silence, trunks, just in case, directed to the east. We trust the cat and wait ... Our hawk appears with a smoky train. Behind him hangs, at the minimum distance - FW-190. The battery wedged in a double burst and Focker, without unnecessary gestures stuck into the ground for 500 -700 m from our positions. The hawk on the turn swung from wing to wing and left for landing, good, here all the bases are near - 10-15 km.

The next day, a car came full of guests and brought a pilot — a chest in orders, a bewildered look, and a suitcase with gifts. It is written on the face - who say thank you? He says - you guessed it, that I need help, so quickly? Yes, so exactly on target? I brought you, in gratitude, alcohol, lard, cigarette case and other gifts.
We nod at Ryzhik - tell him thanks! The pilot thinks he is being played. And the foreman tells the long version storiesyou have already read it.

To his credit, the next day the pilot returned with two kg of fresh liver for Ryzhik. This pilot even thought that the cat's name was Radar, but no - he was already called Ryzhik, they did not rename it.
In June, the 45 part was disbanded, everyone headed home. And the Belarusian elder took the cat with him to the village, rightly judging that if a cat was picked up in Belarus, then he would live there after the war. They say in the village where the foreman was from, the descendants of this cat still live - all fiery-red ....

Ctrl Enter
Noticed oshЫbku Highlight text and press. Ctrl + Enter
We are
Third attempt to replace footclothsHistory of the Air Force and Air Defense of Yugoslavia. Part of 9. Wars in the ruins. Bosnia and Herzegovina. Part of 2
Military Reviewin Yandex News
Military Reviewin Google News
35 comments
Information
Dear reader, to leave comments on the publication, you must sign in.