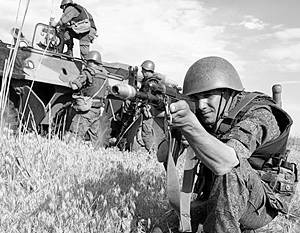 Two former chiefs of the General Staff of the Armed Forces of Russia shared their views with the newspaper VIEW on a possible peacekeeping operation of the Russian troops in Ukraine. A number of other retired military men believe that the Ukrainian army will not offer serious resistance, but Russia should not interfere in what is happening anyway.


Ex-chief of intelligence of the Ministry of Defense group in Chechnya, retired Major General Sergei Kanchukov explained to the VIEW newspaper that in order to block the Donbass from militant attacks, only four units would be needed: two or three special forces brigades (GRU special forces, polite people). ) to block the offensive of the Kiev forces and one or two motorized rifle brigades to create a protected perimeter around the protected areas.

“We do not mean the conduct of hostilities, but only a peacekeeping operation. Therefore, there will be enough special operations forces - special forces brigades. These are people on the same "Tigers" and motorized infantry units assigned to them on an armored troop-carrier or airborne troops. Plus, you will need air support by helicopter, FSB Border Service facilities to control the administrative border, and internal troops to maintain security on the territory. And the local self-defense forces, together with the local Ministry of Internal Affairs, the Donbass people's militia and other security forces of the Donetsk and Lugansk regions, must disarm the Right Sector and all other militants, ”the former intelligence chief explained.

According to him, all the parts listed are ready within an hour after the order to begin the combat mission, and after a few hours - to complete it. “In a few hours it is possible to block everything - a landing takes place by helicopters, it blocks all main directions by roadblocks. After this comes the infantry. Disarmament is carried out by the militia. It is enough to set up roadblocks, and then they act with the support of the Russian troops - that is, the militia carry out, and the Russian troops only cover up and support, ”Kanchuk outlined a possible scenario for the introduction of troops.

He also expressed confidence that the Ukrainian units in the event of such a development of events will not offer resistance and even switch to their side. “The Ukrainian Armed Forces will surrender in places of permanent deployment and will not resist the peacekeeping forces. In case of resistance, adequate measures are taken, ”the major general suggested.

Vice-President of the Academy of Geopolitical Problems, Captain of the first rank of the reserve Konstantin Sivkov also told the VIEW newspaper that no one will provide strong resistance to the Russian troops in Ukraine.

“For this we need people who are ready to fight, and not a few people who have shot and fled. If there is resistance, I don’t think it will be very strong. It is possible that there will be problems in overcoming the canals and ditches that have been digging there, but I also think that they will simply bypass them. Therefore, in a day or two, a maximum of two or three days, the Russian army will be able to reach Kiev, ”said Sivkov.

He explained that the lack of large-scale military operations using regular units proves that there are no military in Ukraine who agree to shoot at their fellow citizens and die for the political ambitions of Kiev politicians.

“If there were such people, they would have long ago liquidated all roadblocks in Slavyansk. This is not the Terrible, in which a very powerful barrier system was created and where a huge amount of weapons. There is nothing like that in Slavyansk, only barricades. If a tank or a barrage vehicle goes to such a barricade, they will demolish it and not even notice it. So the Ukrainian military, having Tanks, could calmly enter the city, take office buildings. But they do not! And why? Are they afraid of Russia? No, they’ve already sent armored vehicles to Slavyansk. But these armored vehicles went over to the side of the rebels. So there is only one conclusion: the troops can stand in cordon, but they do not want to go to war. Moreover (the Ukrainian military) are sitting there without food, their “militias” feed them, ”Sivkov explained.
He added that in order to liberate the Southeast, the Russian army would not have to use “the most modern types of weapons”, it’s just “just enter there”. “These are our people and our equipment, we just return it to ourselves, so why should we bomb them with rockets?” We will negotiate, ”explained the expert.

"And there will be a border of division of Ukraine"

At the same time, Sivkov explained that if Russia would send troops to Ukraine, the response could be followed by NATO. “The NATO troops can move in an accelerated march towards us. In the zone of contact between the Russian and NATO troops, and there will be a border dividing Ukraine. The greatest risk is the possibility of a fire clash between them, since this will inevitably lead to the need for Russian use of nuclear weapons: Europe’s land forces are almost 10 times Russian, and we will not have another way out, ”Sivkov said.

According to him, in the event of NATO intervention, military operations in Ukraine will be "a classic military operation using ground equipment, intelligence suppression means, fire support from the air, with conquering air supremacy, landing, assault bridgeheads." “Conversations that such wars have already ended are conversations of amateurs. They never ended. Such an operation was in Iraq, ”the expert explained.

At the same time, Sivkov noted that NATO obviously would not go to such a scenario, since "there are not complete idiots to enter into a full-scale conflict with Russia." “So, most likely, the case will end in a local conflict, and the actions will be local, there will be no general mobilization to NATO. The whole operation will take no weeks or months, we are talking about hours, in the most serious case - a day, nothing more, ”suggested Sivkov.

The former head of the General Bureau of the Armed Forces, Army General Yuri Baluyevsky, explained to the VIEW newspaper that there are no conditions for intervention by the Russian army in Ukraine, although blood has already been shed there and militiamen are dying.

“If we make a decision on the use of peacekeeping forces, then this must necessarily be international forces, including from NATO countries, and in this case we will get what we have today. To introduce peacekeepers within the CIS, you need the consent of other CIS countries. But no one does not hold any consultations in this direction. The same Turchinov asked for the entry of NATO forces into Ukraine as peacekeeping forces, ”explained Baluyevsky.

According to him, the situation is aggravated by the fact that different forces in the southeastern regions act separately. “While there is no single impulse, there is no clear unity in actions, for example, of the Lugansk and Donetsk regions, the position of the Kharkiv region is not clear. There are their own defense forces, the militia in the Luhansk, Donetsk region, someone in Odessa is making a fuss, but all this is scattered, ”the ex-Chief of the General Staff explained.

According to Baluyevsky, “the only legitimate president, Viktor Yanukovych,” could unite the militia and call upon Moscow for help, but now “it is not audible and not visible.” “According to the logic, a legitimate president in the person of Yanukovich would just have to unite all these areas into a single, well-organized, at least in words, force that would put forth clear requirements that would cause an understanding in South-Eastern Ukraine. But so far it does not clearly sound, ”noted Baluyevsky.

At the same time, Baluyevsky stressed that he could not allow even the thought that an "armed confrontation of the Russian army with the armed forces of the Ukrainian people could begin." “Our yesterday’s partners in the face of the United States and NATO are doing everything to set off a single Slavic people now, push Russia and Ukraine together, Ukraine today is a small thing in the big game. But why should we interfere there? On what basis? Not a single item, prescribed in the “Law on Defense”, is appropriate. Of course, there is an 2 clause of the 10 article - to protect Russian citizens. Is this if someone from the Russians is captured and held, as an NTV correspondent with a Belarusian passport? But I am sure that the same Avakov will understand and let go, ”said Baluyevsky.

The former chief of the General Staff reminded about the estimates of Defense Minister Sergei Shoigu, voiced on Thursday: the number of the Ukrainian group that participates in the operation against the militia is 11 thousand "armed people diluted by the Right Sector", which depict the armed forces of Ukraine. At the same time they are opposed by two thousand militiamen. ”

“The ratio, roughly speaking, is one to five, and according to all the canons, the side that is greater must win. But there have been cases when a large-scale army suffered defeats. After all, who are these 11 thousands? This is not the army that will execute the “fire to kill” command on its people, it will shoot at its neighbor, its countryman. Even with these Bandera all is not lost: when the militia takes them and is expelled, they have completely different faces. Therefore, there is no need for us to interfere in this, ”added Baluyevsky.

“We need a clearly defined goal of the operation”

According to Baluyevsky, the only possible and affordable option so far is the one that Russian Foreign Minister Sergei Lavrov chose: to ensure that the entire world community, “where there are still no people who have lost their mind”, “saw who is behind those today fighting with his people, and how the Ukrainian people protect their land, their children. "

“While heavy weapons, airplanes, helicopters, tanks have not yet been directed at people,” the expert added. - So, something still holds them! I think that it also holds the responsibility before the world community, the Hague court or another tribunal, because then it will inevitably be in such a case, ”stressed Baluyevsky.

According to the ex-chief of the General Staff, now the leadership of the Russian Ministry of Defense "is doing everything right" - is monitoring the situation and demonstrating "the ability and determination of the Russian Armed Forces to stand up for their interests, to ensure the security of their borders and citizens." “If I were now in the chair of the Chief of the General Staff, I would have done the same,” Baluyevsky admitted to the VIEW of the newspaper.

His successor as chief of the General Staff, the author of the current appearance of the Russian Armed Forces, Army General Nikolai Makarov, also explained to the newspaper VIEW that it is too early to talk about possible scenarios.

“We need a clearly formulated goal (of a military operation). When it is known, then it will be possible to talk about what forces and means are necessary for its realization. What is the goal, we do not know. Now any predictions will be hypothetical, and hypothetically any possible developments are possible, ”explained Makarov to the VIEW.