April 26 2014
147
Moscow made an order for new, deeply modernized MiG-29 fighters. However, they may not be new at all. The Kremlin-planned purchase of twin-engine MiG-29CMT sheds light on the extravagant and possibly suspicious manipulations of the Kremlin, which can increase the power of the Russian Air Force ... but they can also undermine.


There was a time when foreigners called almost any Soviet or Russian fighter a “MiG”. And although the fighters for the Eastern bloc and its allies produced other design bureaus, the most productive was the work of the company, named after Artem Mikoyan and Mikhail Gurevich.

The widespread distribution of the products of this design bureau reflected both the popularity of the MiG aircraft themselves and the mercies with which the communist regime generously showered the company.

Now times have changed. After the collapse of the Soviet empire, the rival Sukhoi design bureau became the main supplier of Russian fighters for both its own army and foreign customers.

The successes of MiG, meanwhile, tell a sad tale about hack-fulfilled export contracts, serious technical problems, various embargoes and the inability to get at least one of the wretched contracts of the Russian Ministry of Defense. Over time, promising, and possibly having great potential, MiG development went under the knife to keep the load on the Sukhoi production lines.

In recent years, the affairs of the Russian Air Force have begun to improve, and the Kremlin again orders urgently needed new fighters. But - at "Sukhoi", not at "MiG". The latter had to dig into a handful of export contracts and modest modernization orders for foreign air forces.

The success of the MiG-29K for the Indian aircraft carrier Vikramaditya transferred with great delays pushed the Russian fleet to the order of the same model. And now, when Vladimir Putin’s Russia begins to flex its muscles, the Russian Air Force again orders MiGs. Just like the good old days of the Cold War.

But история with the order of the new "MiGs" is not so simple. As is often the case in Russia, in reality everything may not be as it seems. 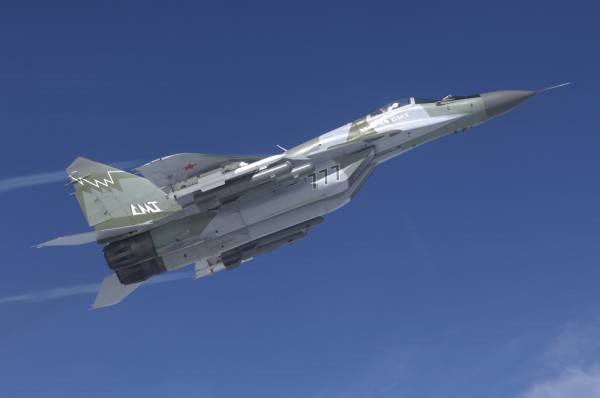 In general, this is quite possible, but it remains to be asked which type of aircraft will be delivered to the customer.

Plane MiG-29SMT was still changeable. In fact, at some point the project was an example of the shameful failure of the Russian defense industry.

The SMT modification of the omnipresent MiG-29 was originally conceived as nothing more than a basic version of the conventional MiG-29, which, in various versions, was built around 1 600 pieces.

Conceived as a retrofit option to squeeze everything out of the roughly 250 aging MiG-29 Russian Air Force, it was quite far from the advanced MIG-35, which was also offered by the company. In contrast to the exotic light-alloy gliders of the new modification of the MiG-29-x, the MiG-29CMT remains similar to the original MiG-29 of the cold war.

But while the MiG-35 is stuck in an orderly development stage, MiG-29CMT may seem to be a good intermediate option.

At least for the Russians. But the Algerian Ministry of Defense can tell a different story. In 2006, Algeria ordered a MiG-29CMT batch as part of a huge defense contract with Moscow, the cost of which, presumably, was 7.5 billion.

Deliveries of the first aircraft began before the end of 2006, but soon the Algerians noticed that something was completely wrong. "New" fighters were not new at all. The SMTs were assembled using old, unsold MiG-29 airframes, which were stored in open-air storage at the Lukhovitsy plant.

They may even have used gliders built for Iraq in the distant 1980s. .

This was a breach of contract, and Algeria demanded a suspension of deliveries. When deliveries resumed at 2007, everything was the same. Algeria refused to pay and in return demanded Su-30MKA Sukhoi multi-role fighters.

He received them - reportedly at the same price as MiGs.

After Algeria canceled the contract in 2007, approximately 15 MiG-29CMT shipped to North Africa were returned to Russia, which paid for them in 2008 in a timely manner. After a small check, the Russian Air Force received 30 from these fighters and sent them to 14-th Guards Fighter Wing.

They arrived at the airfield of the regiment in Kursk at the beginning of 2009. Restored, in fresh camouflage and with new numbers, the MiG-29CMT are now the most combat-ready MiG-29 aircraft in the Russian Air Force. The remaining four MiGs from the party rejected by Algeria were sent to the Lipetsk aviation center.

A “test shot” in the history of the Algerian contract was made last fall, when the last accused in a criminal case connected with him was sentenced to four years in prison in Moscow. The sentence was received by the former director of the company, which supplied outdated equipment to MiG using fake certificates.

Three more Russian businessmen involved in this fraud were sentenced in May 2012.

Be that as it may, Russia rejected the Algerians' accusations of "poor product quality", insisting that the use of the restored gliders in MiGs was in line with the terms of the contract - and that the price was set appropriate. Weak consolation for the "MiG", who did not receive money for the aircraft until he found a new owner in the person of the Russian Air Force.

Apparently, the transfer of former Algerian fighter jets to the Russian Air Force was more likely an action to rescue the MiG from a potential financial catastrophe, rather than a renewal of the Russian army. Despite this, there is little doubt that the new owner is pleased with the acquisition.

The original MiG-29 was always hunted down for a short range, which hardly made it suitable for anything more than a pinpoint cover for key military facilities and infrastructure. The MiG-29SMT responds with an additional fuel tank located in the “hump” of the gargrotte, which allows it to almost double its combat radius.

Also it has a refueling bar in the air. The on-board equipment includes an upgraded multi-function radar, a digital pilot cockpit, improved navigation equipment and an expanded range of weapons used. Forced engines increase aircraft armament and increase its service life - eliminating another nightmare of the original MiG-29.

In reality, the recently ordered MiG-29CMT may differ from the MiG-35 only using the old glider. As a result, we get a fighter with a modern H041P radar with mechanical scanning and modern weapons.

Mindful of the history of Algeria, you need to take a pause and see if the “new” SMTs for Russia are built “from scratch”, as expected, or they will use upgraded fuselages built for other potential foreign customers, but never delivered to anyone. It also remains to be seen the exact nomenclature of avionics and weapons.

Russian Deputy Minister of Defense Yury Borisov proposed the idea of ​​buying another MiG-29CMT party in August 2013. At that time, the Kremlin looked at the SMT model as an intermediate option prior to entering the troops of the new MiG-35. In November, the commander-in-chief of the Russian Air Force Viktor Bondarev 2013 complained that the MiG-35 was still not ready.

United Aircraft Corporation - the parent company, a division of which is "MiG" - retains the confidence that it will be able to sell Moscow MiG-35. However, the new fighter is still waiting in the wings, and the company hopes to order approximately 100 aircraft only in 2016.

The order for the MiG-29SMT is also interesting in the context of the fact that the Russian Air Force continues to see the meaning in a mixed fleet of Sukhoi and light production MiG heavy fighters.

And after the MiG-35, the MiG hopes to ensure interest in the promising light fighter - the potential MiG-29 of the future. The exact situation with the aircraft, known as the AFL, or Light Frontline Fighter, remains unknown.

Respected aviation columnist Peter Butowski suggested that Moscow could abandon the LFI project in favor of the more modest MiG-35. However, when it comes to Russian defense procurement, any conclusions should be made with caution.

And while LFI remains only on paper, it must rely to a large extent on the fighter-demonstrator of technologies from 1990's MiG 1.44 - it was planned as the main rival of F-22. He [LFI], however, will be smaller than both Sukhoi's 1.44 and T-50, and the latter should take the position of a heavy fighter in a potential mixed fleet.

Last year, when Alexander Zelin, the former commander of the Russian Air Force and the current Assistant Secretary of Defense, presented a plan to purchase aircraft before 2025, the stealth fighter LFI was marked in red, indicating that the program had not yet been approved, and therefore its fate not clear.

However, depending on the success, as well as the price of the T-50, LFI may still appear as a cheaper solution ... and with great export potential.