How it started: “Bloody Easter” over Belgrade 70 years ago 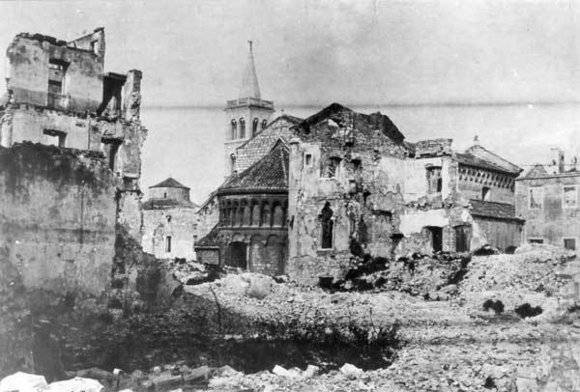 Seventy years ago, Belgrade residents became victims of fighter raids by the Anglo-American aviation. On Orthodox Easter Day on April 16, 1944, US and British aircraft bombed Belgrade, the capital of Yugoslavia. This event has entered history called "Bloody Easter." Then, more than a thousand Serb civilians died ... Massive raids on the Yugoslav capital continued until September 18, 1944. The command of the Western allies justified the bombing of Belgrade with the need to destroy the large transport center of the German troops in the Balkans on the way to the war-ravaged Greece, as well as the large port on the Danube, which was used to transport oil from the Romanian fields to Germany.

However, blasphemous for the Serbs, who themselves fought the German occupiers, the choice of the date of commencement of the bombing, as well as the nature of the victims and the devastation, spoke of something else.

The main role in the bombings that began during Easter services was assigned to the American B-24 Liberator (Liberator) bombers, which were equipped with two-ton bombs. The 16 bombers took part in the April 600 raid. Air defense systems quickly tracked the aircraft and sent an air-raid alarm. However, residents of the city at the first moment poured into the streets, greeting the allied planes of the Yugoslav partisans. Rumors circulated among Belgrade that planes were flying to bomb Romanian oil terminals. However, the bombs began to fall on Belgrade.

And they fell not only and not so much on industrial and military transport facilities. Here are just a short list of targets hit by 16-17 on April 1944: the central quarters of Terrazia and Slavia, the central city streets of Princess Natalia, Milos the Great, Nemani, Sarajevo, New Market, People’s Theater, Zeleni Venac, a prison camp for Old Prisoners. In this camp, the Germans held prisoners of war of the Yugoslav People's Liberation Army. The victims of the bombing of the camp were about 150 people. As for the military facilities used by Germany, only one of them was destroyed - the building of the Belgrade Gestapo department. The loss of 16 on April 1944 of the civilian population of Belgrade amounted to about 1160 people, and among the Germans stationed in the Yugoslav capital about 200 people.

Remarkable detail. In the American military squadron that bombed Belgrade, four Serbian crews served. The command of the Allies gave them leave for the period of the bombing, without devoting pilots to their plans.

The bombings on the Orthodox Easter holiday caused bitterness and indignation among the Serbs. The then Patriarch of the Serbian Orthodox Church, Gabriel, declared that the Anglo-American coalition had lost its "sense of Christian love." It would be more accurate to ask when this feeling led the actions of American and British politicians at all. Note that at the time of Easter and Christmas, even the fighting of the partisans and the Germans, but not the Americans and the British, was suspended.

The bombing of Belgrade and the operational situation on the Yugoslav fronts were not dictated. By that time, there was a turning point in the fighting in favor of the partisans. In January-February, 1944, they broke through into the territory of Serbia and by April switched to conducting military operations against the Nazis and their accomplices practically throughout the entire Serbian territory.

A definite answer to the question of the reasons why the Anglo-American command began regular bombing of Belgrade since April 1994 lies in changing the balance of power in the Yugoslav people's liberation movement. By the beginning of 1944, his leadership had already developed the structure of the structure of the future power in post-war Yugoslavia. In particular, at the second meeting of the Anti-Fascist Popular Liberation Council of Yugoslavia (AVNOI) in November 1943 in the city of Jajce, it was decided that this particular assembly would be the highest authority in Yugoslavia until the end of the war. Its leadership includes members of the Communist Party of Yugoslavia, led by Marshal Josip Broz Tito. The people's liberation committees were recognized as the only legitimate authorities in the entire territory of Yugoslavia. At the same time, the Yugoslav government in exile, on which they were staking in Washington and London, was declared illegal, while King Peter II of Karageorgievich was forbidden to return to the country altogether.

And one more important moment. In December 1943, the leadership of the USSR declared its support for the decisions of AVNOY. And in February 1944, the Soviet mission arrived in Yugoslavia.

So in the spring of 1944, the United States and Great Britain began to consider Yugoslavia no longer as their ally in the fight against Nazi Germany, but as a future geopolitical adversary.

In Serbia itself, the victims of April 1944 of the year are traditionally commemorated in prayers, as are those killed in the even more terrible bombings of 1999 of the year. Both became victims of Western policies towards the Slavic peoples of South-Eastern Europe.

Ctrl Enter
Noticed oshЫbku Highlight text and press. Ctrl + Enter
We are
Diplomats of the People's Commissariat of Defense: on the eve and during the warBloody Easter. Bombing in Belgrade in April 1944
Military Reviewin Yandex News
Military Reviewin Google News
5 comments
Information
Dear reader, to leave comments on the publication, you must sign in.