April 24 2014
54
According to the agency newsru.com, the Russian Foreign Ministry decided to immediately dot the "i" and clearly express the official position of the Russian Federation in relation to the Ukrainian crisis. Moreover, the statement was made against the background of mutual accusations of non-compliance with the Geneva agreements by the Kremlin and the White House. The ministry once again used one-sided arguments, although it is worth noting that Western diplomats also do not neglect such methods. 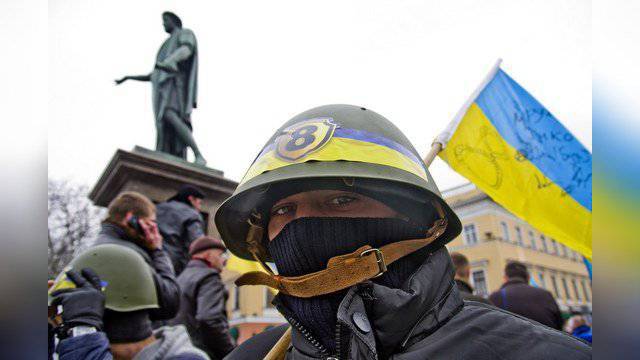 The Foreign Ministry expressed its disapproval in connection with the resumption of anti-terrorist operations by the Ukrainian authorities and called for the disarmament of members of the Right Sector. It is also worth recalling that recently Vice President of the USA Joseph Biden visited Kiev.

As the Russian department reports on its official website, Moscow was very surprised at how much the Kiev authorities, with the support of their American partners, distort the content of the agreement adopted last week in Geneva following the meeting of representatives of Russia, the USA, the EU and Ukraine. For its part, the Russian department is also accused of the same.

The Russian Foreign Ministry claims that, claiming the need to disarm all illegal formations, Western partners for some reason make these demands only in relation to Ukrainian citizens defending their rights in south-eastern Ukraine.

Also in the statement of the Ministry of Foreign Affairs it is said that the Western partners do not get tired of repeating their aspirations to resolve the political crisis in Ukraine without using weapons, however, the facts suggest otherwise. When April 21 and 22 arrived in Kiev, US Vice President Joseph Biden arrived, the Russian side was confident that his arrival would reduce the “bloodthirstiness” of the current Kiev authorities. But in reality, immediately after his departure, it was announced that “anti-terrorist operation” would be resumed in eastern Ukraine.

The Russian Foreign Ministry also called for the release of buildings on the Maidan, which is in the understanding of the Russian side indicated in the Geneva agreement. Russian diplomats were very surprised when, in one of the last interviews, US Undersecretary of State Victoria Nuland stated that the protesters in Kiev have the right to express their opinion on the “Maydanovskaya Square”, since there is some kind of license issued by someone who does not understand it. But the protesters in the south-east of Ukraine, citizens of such a right, for some reason do not have.

Also, according to the statements of the Foreign Ministry, even more absurd against this background is the statement of the oligarch Igor Kolomoisky, who is the appointee of the current representatives of the government of the Dnipropetrovsk region of readiness to pay large rewards for the capture and extradition of state criminals. Who was meant by Kolomoisky is not clear.

Earlier, Foreign Minister Sergei Lavrov, in an interview with Russia Today, made almost identical statements. In Kiev, it was noted that, apparently, Lavrov was not aware of the efforts of the Ukrainian authorities to de-eslacate. According to Andrei Deshchitsa, acting foreign minister in Ukraine, the authorities in Kiev daily work on the necessary measures to resolve the situation in the eastern part of the country.

As for the United States, the local authorities say that the Russian authorities have still not done anything to stabilize the situation in Ukraine at least a little.
Ctrl Enter
Noticed oshЫbku Highlight text and press. Ctrl + Enter
We are
Russian Foreign Ministry commented on the situation with the implementation of the Geneva agreements
Military Reviewin Yandex News
Military Reviewin Google News
54 comments
Information
Dear reader, to leave comments on the publication, you must sign in.