Putin will not be able to "break" Ukraine 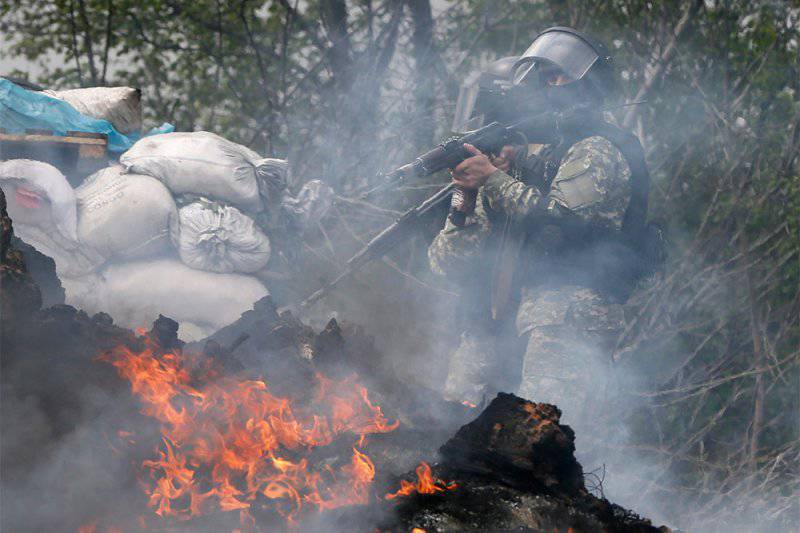 23 April, the Russian Foreign Minister gave an interview "RT"in which he made a number of serious statements. The interview immediately went to quotes on the Internet. The keynote statement by the minister was that in the event of a direct attack of the legitimate interests of the Russians in Ukraine, Russia could act in the manner of a conflict with Georgia with 2008. In the United States, they instantly reacted to such a clear signal from the Kremlin.

Sergei Lavrov made it clear to America: if Russia is attacked, a quick response will follow. The words of the minister leads "Lenta.ru": “If our legitimate interests, the interests of the Russians are directly attacked, as was the case, for example, in South Ossetia, then I see no other way than to respond in full accordance with international law.”

The next day, Barack Obama's statement appeared in the press. Brought him Interfax.

24 April, the US president, while in Japan, said that Russia was not fulfilling its part of the Geneva agreements on Ukraine: "So far, we see no signs that they will act in accordance with the spirit of the agreement worked out in Geneva."

Obama believes that Russia should influence the armed separatists in the east of Ukraine, to convince them to stop resistance to the authorities.

And in order for the Russians to become more docile, B. Kh. Obama scared the Kremlin with “further sanctions.”

Sanctions against Russia, we recall, the other day asked the Vice-President of the United States Joe Biden, who visited Kiev, Mr. Klitschko. Understanding where the wind is blowing from and who is in the main theater, the leader of the UDAR party, addressing Biden, called on not only the United States but also Europe to impose severe sanctions against Russia in order to stop its “aggression against Ukraine.” Klitschko words quoted by the agency RBC.

Klitschko spoke as if under American dictation: “The territorial integrity and independence of Ukraine are under attack from Russia. Today, the urgent task is to stop Russian aggression and ensure non-interference in the internal affairs of our country. ” According to V. Klitschko, the West should impose sanctions against Moscow, which “should cover all sectors of the economy and be really painful. Unfortunately, the Russian leadership understands only the language of force. ”

The leader of the UDAR party is convinced that the containment of Putin is in the interests of both the United States and Europe. The Russians need to be stopped: “If you do not stop Russia, you will soon have to pay a much higher price. Putin will go as far in Ukraine as he is allowed. ”

Well, yes, very far away - we have repeatedly quoted various statements by Western and pro-Western politicians and observers that Putin is about to conquer the whole world, starting from areas conveniently located between Ukraine and the North Pole. It is not clear, however, why Putin is slow.

It is not surprising that Klitschko started talking about weapons - American, of course. He told Mr. Biden that US military and technical assistance is important to Ukraine - in particular, providing the army with modern weapons and equipment.

In conclusion, the leader of "UDAR" said that the visit of the Vice President of the United States to Kiev is yet another proof of America’s leading and constructive role in finding a way out of the Ukrainian crisis.

Oh, the US will construct something for you ... Meanwhile, in the West, they are discussing a terrible topic: will the military confrontation of the West with Russia happen?

On the eve of the Third World

British journalist sean rament in a newspaper «Mirror» writes that one of the main spies of Britain has already warned Mr. Cameron about something.

In MI-6, the Prime Minister was lucidly explained that Vladimir Putin would not "sit back" if the West sent troops to Ukraine to support the local government. An unnamed high-ranking source told Cameron: “The basic idea is that because of Ukraine, it’s not worth starting the Third World War.”

The journalist reminds that the commanders of the NATO bloc are now considering all options for countering Moscow: from economic sanctions to offering military aid to Ukraine.

However, MI-6 agents and employees of the Main Intelligence Directorate warn that the crisis could escalate into a fierce civil war that would cover most of eastern Ukraine: they will declare independence there and join Russia.

The newspaper also reports that, at present, unarmed British groups are secretly moving around Ukraine, observing border posts and cities where the Russian-speaking population predominates. The purpose of these secret groups is to “clarify Putin’s intentions.”

Let him give everything he stole

Ed Royce, who heads the House Foreign Affairs Committee, at a briefing by a delegation of representatives of the US Congress in Kiev, made a statement that quotes "Ukrainian Truth" With reference to the Ukrainian-language Radio Liberty.

According to Mr. Royce, Ukraine can produce half of the gas it consumes: “Ukraine will be able to produce 50% (of gas needs) up to 2020, if we have the opportunity to develop gas resources here. This should be a combination of strategies that we believe can help reduce the cost of energy and make Ukraine less dependent on Gazprom, the monopolist in the gas market. This is the direction in which we plan to cooperate. ”

The answer to Putin in the near future may be the presidential elections scheduled for May. Another congressman, Eliot Engel, said this: “The whole world will observe these elections. We must be sure that they will be fair. And this will be the answer to Putin that he will not be able to defeat a free and democratic Ukraine, because the Ukrainian people will not allow him to do this. ”

According to the congressman, Putin should return the territory to Ukraine: “I believe that he must give up all the territories that he stole from Ukraine. Therefore, this will be further discussed by world leaders. ”

The publication reminds that the US congressmen spoke with journalists on Tuesday evening, being in Kiev together with Vice President Joe Biden.

He does not need war or Ukraine

"Moscow Komsomol" quoted the words of one whose surname very often now adorns the western and ukrainian news.

Vladimir Putin, giving an interview on Russia-1 on Saturday last week, once again clarified Russia's position on Ukraine. This position is extremely simple - let Europe help Kiev: “We don’t want to undermine either the Ukrainian economy, nor question the reliability of transit to Europe. Therefore, we urge all European countries, all countries that are interested in supporting the Ukrainian economy, to join the process of helping Ukraine and work out measures aimed at financing the budget. ”

From this it is clear that the leader of Russia is not going to do what the American congressman expressed with the words "to smash a free and democratic Ukraine."

Still, breaking and destroying is the lot of the West. This is what the West does best. And Russia with him will not be in this. But another thing, of course, is if someone comes to us with a sword ... Some of the “broken ones” know how this usually ends.

Observed and translated by Oleg Chuvakin
- especially for topwar.ru
Ctrl Enter
Noticed oshЫbku Highlight text and press. Ctrl + Enter
We are
South Ossetia wants to Russia. How will the republic solve the problem of reunification?Situational analysis of the death of the MH17 flight (Malaysian Boeing 777), made on the basis of engineering analysis from 15.08.2014
Military Reviewin Yandex News
Military Reviewin Google News
222 comments
Information
Dear reader, to leave comments on the publication, you must sign in.