Tymoshenko is backing up. Or cheating?

April 23 2014
95
In Donetsk, a press conference was held of the presidential candidate of Ukraine, the leader of the Batkivshchyna party and former prime minister Yulia Tymoshenko, during which she declared her readiness to support a peaceful resolution of the crisis. Prior to that, she was talking about creating her own militia, which would include former police and military, to defend Ukraine. 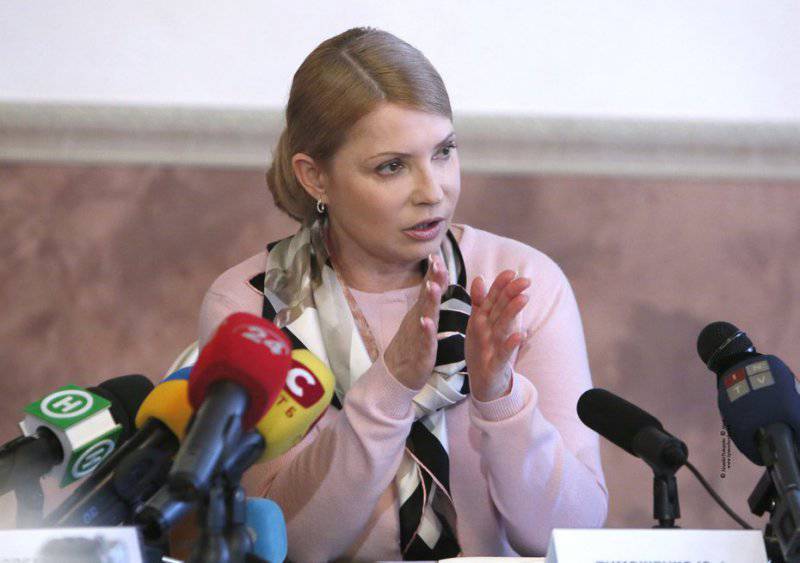 The presidential candidate stated the need to find mutual understanding between politicians, central authorities and citizens of all Ukraine. At the same time, special emphasis was placed on the desire to achieve mutual understanding in a peaceful way, without victims of the citizens of Ukraine on both sides. In her opinion, this is possible only on condition that the Russian troops, including special services, return to Russian territory and reach agreements between the Ukrainians.

We will remind that earlier Yulia Tymoshenko declared her readiness to open mobilization points throughout the country to form an armed militia that would include former militiamen and military. This militia was planned to be called the "National Movement of Resistance against Russian Aggression." Its offices were to appear in every region, district, city.

Meanwhile, according to RIA News, near the building of the Donetsk regional administration, protected by representatives of supporters of federalization (with whom Yulia Tymoshenko met shortly before the press conference), everything is calm. Employees of the city council also quietly perform their duties.

During the meeting, a protocol of mutual understanding was passed by the presidential candidate to supporters of federalization, taking into account their requirements. It should be signed, on the one hand, by the Batkivshchyna party, on the other hand, by people who are in the building of the Donetsk regional administration. It talks about the obligations of the Batkivshchyna party (which is actually the main political force in the state), firstly, to hold a law in the Verkhovna Rada giving the Russian language regional status (while Ukrainian remains the only state language), secondly, to begin the process Amendments to the Constitution. The result of constitutional changes should be the election of local governments, which, in addition, are more financially independent. In addition, the document speaks of the obligation of the Batkivshchyna faction to submit to the Verkhovna Rada and vote for a law providing for an amnesty for all protesters who have not committed serious crimes.

The protesters are required to release the building of the Donetsk regional administration, so that civil servants can go to their offices, and public service workers can begin to restore order inside the building and in the surrounding area. Also, protesters must surrender all unregistered. weapon.

Representatives of the protesters said the possibility of dialogue. The latter, however, does not indicate their unequivocal intention to compromise.

Such attention to the eastern regions and, in particular, to the Donbass from Yulia Tymoshenko speaks about her desire to get out of the shadow of her henchmen, using the situation in these regions. Among the henchmen of the "orange princess" can be called Alexander Turchinov and Arsen Avakov. Members of other opposition parties, such as Freedom Oleg Tyagnybok and UDAR, Vitali Klitschko, received either, in the first case, two minor ministerial chairs, or, in the second case, seats for deputies or leaders at the local level.
Ctrl Enter
Noticed oshЫbku Highlight text and press. Ctrl + Enter
We are
Reports from the militia of New Russia for 7 September 2014 of the yearReports from the militia of New Russia for 2 September 2014 of the year
Military Reviewin Yandex News
Military Reviewin Google News
95 comments
Information
Dear reader, to leave comments on the publication, you must sign in.