Today, the situation in Southeastern Europe (SEE), and especially in the Balkans, remains unstable, interstate territorial disputes continue, and interethnic contradictions persist, which tend to further aggravate. Under these conditions, the activities of our Western partners are intensifying in consolidating their political influence in the region and expanding their economic and military presence in it. The priority of the foreign policy activities of the countries of the region is integration into European and Euro-Atlantic structures, as well as increasing the scale of cooperation with Western countries.

Today, the whole world, including the states in the Euro-Atlantic space, is facing ever more dangerous threats and challenges to security. Really effectively counteracting the growth of international terrorism and cross-border crime, the illegal spread of weapons, drug trafficking, cyber threats, strengthening interfaith contradictions and tensions in the framework of unilateral approaches and closed alliances are unlikely to succeed.

I am convinced that even the most powerful military-political bloc is unable to counteract modern challenges and threats.

The experience of military operations in Iraq, Afghanistan, Libya proves this convincingly. We need completely new approaches and mechanisms based on integrated efforts, combining the actions of all states and international organizations.

The division of European countries into members and non-members of the NATO club is hardly a common European good, as they are trying to present in Brussels. NATO expansion will not enhance stability. On the contrary, it will undermine it, contributing to the further fragmentation of a single security space. Any state that does not belong to one or another closed military club and, accordingly, is not involved in shaping its policy, will feel threatened by its security.

Our partners are constantly trying to convince us that the expansion of the alliance will only benefit Russia and will ensure its security. It sounds rather paradoxical.

We have repeatedly reminded that the expansion of the block cannot be called anything other than a historical mistake. Such actions violate the military-strategic balance and lead to destabilization of the situation in Europe and beyond. 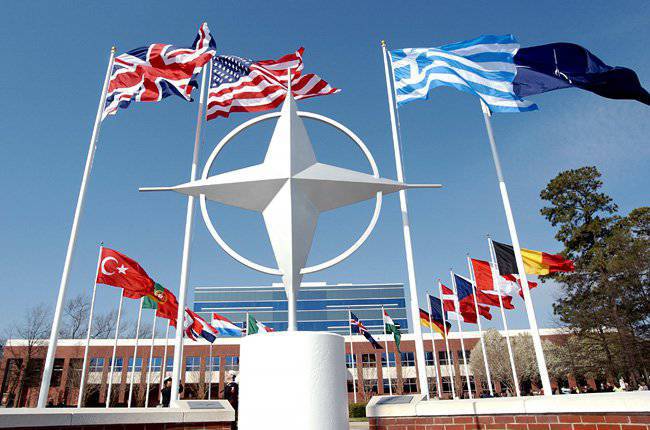 The benefits of joining NATO are not so obvious. The process of Euro-Atlantic integration for the countries of SEE has itself become a powerful engine of internal reform. Significant progress has been made. But is it worth the rush to become a member of NATO? Along with limiting sovereignty, the so-called recruits of the alliance are forced to bring their defense spending to two percent of GDP, which often means a significant increase in the current military budget in far from the most favorable financial conditions.

Earlier in Eastern Europe, the myth that joining NATO was a condition or even a guarantee of joining the EU was popular. I am sure that our Eastern European partners understand that this is not so. Just look at the example of Albania and Croatia, which at the same time became members of NATO in 2009 at the same time, but are now at different levels of the European integration process.

In addition, major changes are occurring in the alliance’s partnership policy. The possibilities of joint work with states that do not plan to join NATO are expanding. Our northern neighbors, Finland and Sweden, for example, or countries such as Austria and Switzerland, are participating in NATO partnerships, missions and exercises, learning the necessary interaction experiences and practical skills. However, they are in no hurry to join the alliance. The government of these countries, apparently attentive to public opinion, carefully weighs the benefits and risks.

From the experience of the relations of the Russian Federation with NATO, it can be said that the most practical and effective course is combining the pursuit of equal mutually beneficial cooperation in areas where our security tasks coincide, with principled upholding our legitimate interests where disagreements persist (the ABM problem expansion of the alliance to the east).

At the Russia-NATO Council Summit in Lisbon on November 20, 2010, a decision was made to build a strategic partnership based on the principles of the indivisibility of security, mutual trust, transparency and predictability.

I can only express regret that the alliance is still living stereotypes of the Cold War. The decision of the NATO Council to suspend the holding of meetings in the framework of practical cooperation with Russia indicates a biased and biased approach in analyzing the causes and consequences of events in Ukraine.

Apparently, the reflexes of the past prevailed, which did not allow an objective understanding of what was happening. We consider it extremely dangerous to bring the “NATO factor” into the already complicated and fragile situation in Ukraine, which creates an additional element of tension, undermining the prospects for normalizing the situation.

The current leaders - usurpers of the authorities in Kiev announced the signing of an association agreement with the EU. And despite the fact that the Ukrainian state is in the deepest crisis. Moreover, people who have declared themselves to be power do not have the support of their own population.

The provisions of the political part of the association agreement provide scope for further steps to consolidate Ukraine in the foreign political and military-political orbit of the European Union and the West as a whole. In the current circumstances, it can be expected that the signing will be followed by steps towards closer interaction, including in the context of the evolution of the EU’s common security and defense policy and its potential link with NATO activities. In this case, it would be right to first reach a national agreement, and then raise the issue of membership.

Despite this, we are determined to have a substantive conversation with our partners on the issues of building a new architecture of Euro-Atlantic security that would be more effective than the natocentric model and would correspond to modern realities.

The Russian approaches are based on the initiative to conclude a Treaty on European Security (EST) with the aim of making the repeatedly declared principle of the indivisibility of security legally binding, working in practice, to codify the political declarations that no state in the Euro-Atlantic region will ensure its security due to the safety of others.

It is about the right to equal security for each state, regardless of whether it is a member of any military-political alliances, which must be supported by appropriate regulatory guarantees. This would allow concentrating political and defense resources on countering global threats and challenges.

Moreover, the idea of ​​the European Security Treaty is inclusive, enables any state to join this initiative, does not create new dividing lines, and does not designate a “geopolitical adversary” by analogy with the times of the Cold War.

The broad international discussions, initiated by the EEB initiative, focused on strengthening European stability, are pushing partners to put forward their own proposals that are consonant with the philosophy of the Russian approaches. We heard many of them last year at the international conference “Military and Political Aspects of European Security” in Moscow. The Russian Ministry of Defense is preparing for the next Moscow International Conference on European Security, which will be held 23 – 24 in May.

As far as I understand, the European Union, despite the crisis, intends to follow the planned course of expansion, focusing its main efforts on the region of the Western Balkans.

At one time, Russia agreed with the arguments of the European Union that granting the prospect of EU membership to the Western Balkans countries could potentially serve as one of the instruments for stabilizing the situation in this region of Europe.

From that moment on, almost 15 years have passed. Croatia joined the EU. Serbia and Montenegro have begun accession negotiations. All countries of the region, to one degree or another, have been guided by councils from Brussels for more than one year and receive technical and financial assistance from there. It was decided to cancel the visa regime for citizens. In a word, a lot of effort has been invested. It can be said that the provision of European perspectives to the countries of the Western Balkans at a certain stage played a positive role, becoming a consolidating factor, to some extent stimulated their carrying out the necessary painful reforms. However, today the situation in the Balkans cannot be called stable and predictable.

The most problematic points on the Balkan map are Bosnia and Herzegovina (BiH) and Kosovo.

Apparently, the EU is very disappointed with the state of affairs in BiH. To some extent, this is understandable: Brussels invested a lot of money and effort there, used many of the tools in its arsenal, reduced the requirements for the promotion of the Bosnian European perspective, but all was in vain. Breakthrough results were not achieved either by the provision of a visa-free BiH, a structural dialogue on justice issues, coupled with a high-level dialogue on accession issues, or a “road map”, the implementation of which was to end with the introduction of the EU-BiH Stabilization and Association Agreement and the adoption of consideration of the Bosnian application for membership in the European Union.

All this, however, should not be a pretext for action, intentionally or not, but shaking the Dayton construction of BiH. Although it is imperfect, by pressure and coercion, neither the strengthening of the Bosnian state, nor the more active promotion of BiH to EU membership will be achieved.

I consider it unacceptable to try to use the prospect of EU membership for making concessions from Serbia in the context of a Kosovo settlement. This is not a very reliable basis for building future relations between the Serbs and the Kosovars. Obviously, the prospect of EU membership for Serbia and other states that have not yet had time to join there, looks very vague today (according to experts, the closest candidates - Serbia and Montenegro - will be able to join the “European family” with the most successful scenario in 8 – 10 years). And this means that both Serbia and other countries of the region are inevitably waiting for the stages of both Euro-enthusiasm and cooling of interest in European integration.

For Russia, of course, it is important that the process of EU integration of the countries of the Western Balkans did not create new dividing lines in Europe and would not adversely affect the development of our bilateral relations with them, including in the trade and economic sphere. Unfortunately, this is not always avoided.

I am convinced that forcing the countries of the region to focus exclusively on Brussels, while forgetting about other partners, especially given the insecurity or at least the remoteness of their membership in the EU, is wrong and does not meet the interests of the states of the region.

Ctrl Enter
Noticed oshЫbku Highlight text and press. Ctrl + Enter
We are
What is dangerous sly NATO diplomacyOleg Valetsky about the wars in the Balkans, their causes and Russian volunteers
Military Reviewin Yandex News
Military Reviewin Google News
10 comments
Information
Dear reader, to leave comments on the publication, you must sign in.