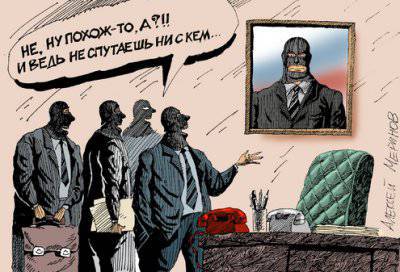 On the State Department site a document appeared, entitled “The Sequel to Russian Fiction: 10 More False Statements about Ukraine”, which is a collection on the theme of a “false” Kremlin propaganda machine, allegedly punching lies after lie.


The first item of the Russian “false statements” related to “hate propaganda and incitement to violence” in the gosdepovskom list indicates that, according to the Kremlin, there are no Russian agents in Ukraine.

State Department instantly exposes this statement. Proof: the Ukrainian government arrested more than a dozen suspected Russian intelligence agents in recent weeks; many of them were armed during the arrest. On April 12, armed pro-Russian militants seized government buildings, acting quite professionally. The operation was carried out in six cities in eastern Ukraine. Many of its participants had body armor and were armed with such things: “AK-74s and Dragunovs”. Members of the armed forces (not all) wore black and orange St. George ribbons. They called for referenda on secession from Ukraine and for an alliance with Russia. These operations, the US Department of State concludes, are “strikingly similar” to those that were carried out against Ukrainian facilities during Russia's “illegal intervention” in the Crimean situation at the end of February and the subsequent “occupation” of the peninsula.

In the second paragraph, the State Department refutes the statements of Moscow that pro-Russian demonstrations in Ukraine are being organized "only by Ukrainian citizens acting on their own will." Not true! Russian websites openly recruit volunteers and incite violence, according to the State Department. There is evidence that the document says that “many of these so-called“ protesters ”are paid for their participation in violence and unrest.” Hence it is clear that these incidents are not spontaneous events, but rather part of a “well-organized Russian campaign” incited, separatism and sabotage of the Ukrainian state. However, the Ukrainian authorities are working tirelessly: they arrest "highly skilled and well-equipped Russian provocateurs working in the region."

Russia claims that leaders in eastern Ukraine enjoy broad popular support. The fact is, the State Department indicates, that “the overwhelming majority of Donetsk residents (65,7 percent) wants to live in a single Ukraine and reject integration with Russia.” This popular opinion of the State Department learned from a public opinion poll conducted at the end of March by the Donetsk Institute of Social Research and Political Analysis. The pro-Russian demonstrations in the east of Ukraine were rather modest, especially compared to the Maydan protests in the same cities in December, the State Department is confident.

In Russia, they believe that the situation in the east of Ukraine may escalate into a civil war. But after all, if it were not for Russian disinformation, not a provocation and not a “big Russian military force” on the border, there would not be any such situation in the east of Ukraine, the State Department remarks. Yes, a small number of separatists seized several government buildings in Donetsk, Lugansk and Slavyansk, but they do not have “substantial popular support”. OSCE observers reported that these incidents are only local in nature.

The Kremlin is confident that the Ukrainians have created an independent "Donetsk People's Republic". But the State Department has a different point of view. Civil society and non-governmental organizations in Donetsk categorically reject the statement about the "People's Republic". These organizations support the provisional government, the sovereignty and territorial integrity of Ukraine.

Statement number six is ​​considering a Russian statement on the relocation of armed units from the border with Ukraine. According to the State Department, there is no evidence. One battalion? This is not enough! It is estimated that the Russian military 35000-40000 remained along the border, and this is in addition to about the military 25000, which are now in the Crimea, the State Department writes.

In the seventh paragraph, American foreign affairs experts examined a statement from Moscow that ethnic Russians in Ukraine were under threat. The fact that there are no reliable messages, according to the State Department. A survey of the International Republican Institute, promulgated by 5 in April, made it possible to establish that 74% of the Russian-speaking population in the eastern and southern regions of Ukraine believe that they were not pressured and were not threatened "because of their language." But those gentlemen who are real ethnic minorities in Russia, first of all, Ukrainians and Crimean Tatars, and who disagree with Putin’s policies, constitute the real risk group. The OSCE has identified urgent security concerns for minorities, especially ethnic Ukrainians, Crimean Tatars and others. And the Russians, who oppose the “authoritarian regime of Putin,” are also “constantly subjected to persecution.”

Item number 8. The new government of Ukraine is headed by radical nationalists and fascists. However, the Rada has not changed since February, the State Department writes. It even has the party of former President Yanukovich ("Party of Regions")! The new government was elected by an overwhelming majority in parliament, including many members of the former party of Yanukovich, who voted for it. And it, this very government, considers it its duty to protect the rights of all Ukrainians, including in the Crimea.

Moscow claims that the “fascist” government in Kiev is persecuting ethnic minorities. However, the heads of the “Jewish, German, Czech and Hungarian Communities of Ukraine” publicly stated the opposite - they said they felt safe. Moreover, “many groups” of the mentioned minorities fear “to become victims of persecution”, to which Russia, which occupied Crimea, will subject them. OSCE observers confirm: this concern has a basis.

Finally, the final point is the Kremlin’s assertion that Russia does not use either energy resources or trade as weapons against Ukraine. The State Department sees the situation a little differently. After the “annexation and occupation of the Crimea,” Russia for two weeks raised the price of gas for Ukraine by 80%. Moreover, the Kremlin allegedly seeks to receive more than 11 billion of overdue payments. In addition, Moscow still restricts Ukrainian exports to Russia.

“On the statements from this document, most likely, in the near future, all decisions made in Kiev will be built. During the speeches of the de facto President Alexander Turchinov, theses on the artificial nature of popular unrest in the southeast and the like are likely to be repeated many times to substantiate the possibility of using the army to disperse rallies. On our television channels, obviously, they will say with double force that the Russian-speaking population has no problems. Although, for example, I have been repeatedly threatened with physical violence, because I criticize the Kiev authorities in my materials.

The paradox of the whole situation around Ukraine is that since November last year news about us do not go with the editorials of all the world media, although we do not have people dying tens of thousands, as in Syria. We, the citizens of Ukraine, simply once again became the focus of attention, not because of the fact that the powerful of the world really care about the situation with human rights and democracy. And simply because the Ukrainian people have once again become a convenient training ground for working out the newest methods of information warfare. And today, in my deep conviction, is its apotheosis. ”

What to do next, comrades? The answer is clear: to win in the information war.

Once we lost in one big infobit that went on for decades. And they lost the USSR. Today’s battles, although there are incomparably fewer victims in them than in Syria, do not leave the network arena because the State Department has once again clashed with the Kremlin. Ukraine is the most real battlefield for influence in the world of Russia. And propagandists from the State Department will deliver one blow after another. They have a lot of experience in this business.

Ctrl Enter
Noticed oshЫbku Highlight text and press. Ctrl + Enter
We are
United Europe is preparing another trip to the eastStrangulation: the context, conduct and consequences of the American naval blockade of China
Military Reviewin Yandex News
Military Reviewin Google News
143 comments
Information
Dear reader, to leave comments on the publication, you must sign in.