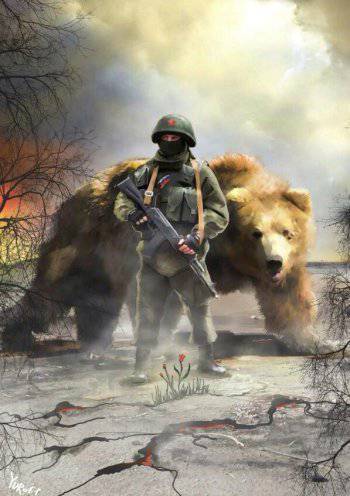 Following the Geneva Conference, President Obama announced that he would monitor how Russia fulfills its obligations in Ukraine. This is an example of onizdeti logic at the highest level, because Russia in Geneva did not undertake any obligations. Moreover, Western analysts write that in Geneva, the United States "surrendered Ukraine to Russia," Sergei Lavrov again beat John Kerry: "Russia did not commit to undertake anything, or refuse something," the conference participants only called on the parties to the conflict to refrain from violence.


But Obama, or his associates, came up with a “commitment” for Russia to “disarm pro-Russian activists” so that there was something to impose sanctions on and in general defame Russia. By analogy with the “annexation of the Crimea,” and in the spirit of their old tradition, they managed to blame Russia for something, and then hysteria, even to the Sochi Olympics, they were able to find fault: too expensive, and not “gelobilivaya”!

The achievements of the Geneva Conference are very modest, the United States and Russia, in fact, have taken a time out, and the South-East of Ukraine received an Easter respite at the calls for a de-escalation of the crisis. The conference was balancing on the verge of collapse, and Lavrov apparently threatened this, judging by his repeated seclusion with Kerry, and humiliating, in general, leaving the head of EU diplomacy Ashton alone with Kiev acting Minister of Foreign Affairs Deshitsey. High negotiating parties seemed to point out the real place of the European Union and the Kiev junta in Geneva - outside the door of negotiations.

We did not have time to dry the ink on the Geneva statement, and Kiev “onizdeti” proved that it was pointless to negotiate with the children. Deshitsa has already managed to declare that the agreements reached “do not refer to the Maidan”, and in general to the Kiev authorities, since she is a “power” and has already legalized everything: the Maidan and the Maidan militants.

Now the neo-Nazi hundreds are declared by the National Guard. Moreover, armed detachments from the “patriots of Ukraine” began to be created in the regions, and politicians and governors acquire personal armies, as Tymoshenko did, now it can also be called a “field commander with“ nuclear weapons". And all this is declared "within the law."

All this is not just serious, but very serious: the United States is launching a Latin American scenario in Ukraine, there such “detachments of patriots” were called more openly - “death squads”. American advisers have extensive experience in creating such “patriotic squads” in Latin America for the extrajudicial destruction of non-patriots.

And there is no exaggeration in this, the sinister Yarosh with his “Right Sector” is not at all alone: ​​the other characters of the political scene of Svidomo Ukraine are no better. Here, Oleg Lyashko, at a rally from the podium urges "to kill the separatists," and his audience applauds him.

Oleg Tyagnybok does not tire of justifying the neo-Nazi fervor of his Freedom pariah and declares: “Traitors with mandates play up to the occupants with machine guns” and threatens: representatives of the Party of Regions and the Communists in parliament must abide by the oath of the people's deputy, or lay down their mandates and be criminally responsible for treason Ukrainian people. And all of them today are candidates for the presidency, backed by their own pocket armies.

Washington is behaving now in Ukraine as in some Latin American country, cleaning out its new “acquired state” in the way it is familiar to. The audacity and rudeness of such an American policy, shameless defamation of Russia, even by the highest diplomatic figures like the female trio: Samantha Power and Psaki and Nuland, is outrageous, but why does Russia not respond “adequately” to all this rudeness?

Why Russia will not accuse Washington of committing a coup d'état in Ukraine, and with the help of neo-Nazi militants, and thus involvement in the revival of Nazism in Ukraine? You can raise the question of denazification, defashization of Ukraine, as it was done with Hitler's Germany. Maybe you need to freshen up the bright image of Nikita Khrushchev for Washington?

In this sense, Vladimir Solovyov asked the press secretary of V.Putin Dmitry Peskov in his program, to which he, after some thought, replied: because we are polite people ... Yes, “authoritarian Putin Russia” is pursuing a very “polite” policy today, despite to the "fair of cynicism and hypocrisy" in the West.

It can be said that this is evidence of power, and an understanding that Russia is “the truth”, but there is also a political calculation: not trying to drive America “into a corner”, Russia allows sensible forces in it to influence politics, restructure America’s policy or ... let her fall apart. Washington is trying to “drive Russia into a corner,” but in the modern world there are no more corners left, remarked Sands. And Russia can become the leader of the whole non-Western world.

... And Washington’s hysteria about “Russian intervention” in Ukraine was answered by Defense Minister Sergei Shoigu: “It’s hard to look for a black cat in a dark room, especially if it’s not there. This is especially stupid if this cat is smart, bold and polite. ” It seems that the American mercenaries near Donetsk did not disappear, but they fell into the hands of this “polite cat” ...

Ctrl Enter
Noticed oshЫbku Highlight text and press. Ctrl + Enter
We are
Situational analysis of the death of the MH17 flight (Malaysian Boeing 777), made on the basis of engineering analysis from 15.08.2014"Pathological liar" from the State Department
Military Reviewin Yandex News
Military Reviewin Google News
284 comments
Information
Dear reader, to leave comments on the publication, you must sign in.