Yatsenyuk promises amnesty, Donbas militias have their own conditions 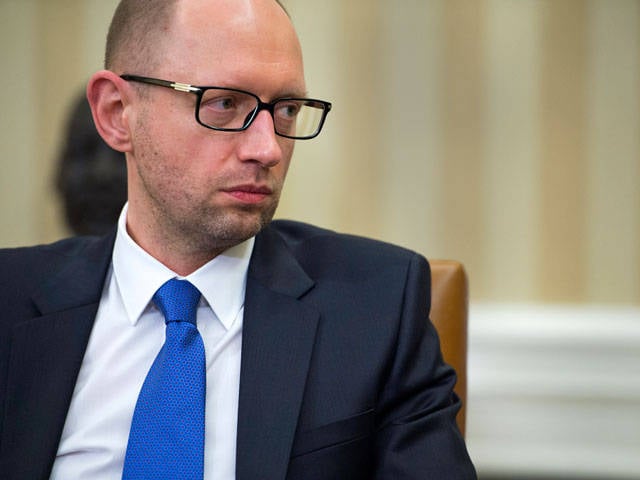 The Cabinet of Ministers of Ukraine has prepared a draft amnesty for protesters in the southeast. Reports about it RIA News with reference to the Ukrainian Prime Minister Arseniy Yatsenyuk appointed by the Verkhovna Rada. According to him, in the near future a draft prepared by the government will be registered in the Parliament of Ukraine.

The essence of the document is that as soon as the administrative buildings are vacated, the government will amnesty the protesters. Meanwhile, it is noted that this will not affect those who have committed serious crimes.

However, the leadership of the Donbass people's militia states that militias in the east of Ukraine will free up the administrative buildings and lay down weapon only if the Kiev authorities release their supporters and agree to hold a referendum on determining the status of the regions.
At the same time, the deputy head of the Donbas people's militia, Sergey Tsyplakov, expressed doubt that the authorities in Kiev would stop persecuting the militias, release the arrested leaders, and the Right Sector and other terrorist organizations would lay down their arms.

The representative of the Donbass self-defense forces Miroslav Rudenko also stated this today in a telephone interview with Interfax. “We will lay down arms only if attacks from the National Guard and other Ukrainian armed structures cease on us; if we and our families feel safe,” Rudenko said.

In addition, the militia are ready to consider as one of the conditions for disarmament the possibility of granting them Russian citizenship while preserving Ukrainian. “We have not received such proposals yet, but if we, the residents of Donbass, are offered Russian citizenship as a second, for example, we will not refuse. And in this situation, of course, it will be easier for us to lay down our arms, because this will be a guarantee of our security.” noted Rudenko.

Earlier it was reported that at the quadripartite meeting on the situation in Ukraine (Russia-US-EU-Ukraine) held on April 17 in Geneva, agreement was reached on initial concrete steps to de-escalate tensions and restore security to all Ukrainian citizens.

"All parties must refrain from any violence, intimidation or provocative actions," said the final statement adopted in Geneva.

According to the document, the participants condemned and rejected any expression of extremism, racism and religious intolerance, including anti-Semitism.

The parties also agreed that all illegal armed groups should be disarmed, illegally seized buildings should be returned to their rightful owners. Illegally occupied streets, squares and other public places in Ukrainian cities and towns should also be vacated.

It is also noted that the amnesty will be guaranteed to all participants of the protests, except for those who have committed serious crimes.
In addition, at a meeting in Geneva, it was decided that the OSCE special monitoring mission should play a leading role in helping the Ukrainian authorities and local communities implement de-escalation measures.

According to the statement, the constitutional process announced in Ukraine should be inclusive, transparent and accountable. It should provide for the immediate start of a broad national dialogue involving all Ukrainian regions.

This was reported on the evening of April 17. But at about the same time, as reported by the representative of the “People’s Army of Donbass” Miroslav Rudenko, one of their checkpoints under Slavyansky (in the village of Sergeevka) was fired upon.

"At the same time, those on duty at the checkpoint were detained," the militia leader said. Also, according to his data, the Ukrainian special services detained one of the activists of the self-defense forces in the city of Volnovakha (this is 60 kilometers south-west of Donetsk). “The activist was detained, according to our data, by the SBU and taken to Kiev,” said Rudenko.

A detailed report on how it was posted on the portal of supporters of the federalization of Ukraine "Russian spring". There is also a clean Thursday video published in the village of Sergeevka, Slavyansk district, Donetsk region.

Ctrl Enter
Noticed oshЫbku Highlight text and press. Ctrl + Enter
We are
Reports from the militia of New Russia for 29 August 2014 of the year
Military Reviewin Yandex News
Military Reviewin Google News
65 comments
Information
Dear reader, to leave comments on the publication, you must sign in.