Why offensive is better than defense, cure for breakthrough defense 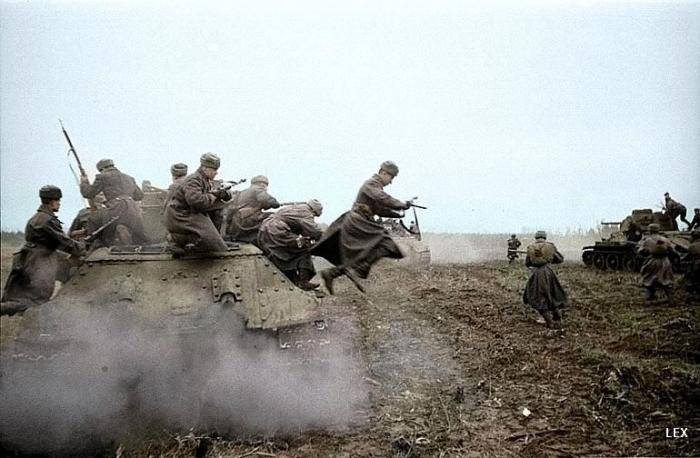 How can you resist an opponent’s strike if he has already launched an offensive? If the direction of the blow is not guessed, or defense does not stand? The most effective means against the advancing enemy are counter-attacks to the flanks.

And the success of the offensive, counterstrikes and defense depends on the density of troops and competent campaigning - on the talent, experience, and skills of the leaders. When there is no solid defense, you can lead so-called. “Deterrent actions”, one of the good examples of such actions are the battles of Panfilov’s 316 division (later the 8-I Guards Division). The division defended not a solid front, but directions, roads. She put up a barrier, the Germans stopped, turned around, beat, looked for a weak spot, pressed, part of the division retreated to the next frontier. The Wehrmacht was losing time. So the 1075 regiment of the 16-18 division of October 1941 fought: by the time the Wehrmacht struck, the first solid trench was dug, the second was broken, the heights and settlements were prepared for a perimeter defense, 4000 mines were laid out, and 4 km of anti-tank ditch were dug. The regiment withstood the first strike, the Wehrmacht found a weak spot the next day and broke through the defenses, the regiment retreated to a new frontier that other divisions had created. The division could not stop the enemy, but held back the onslaught, the enemy was losing time and resources. 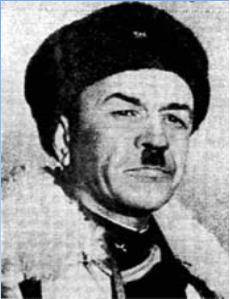 The experience of the First World War

It is commonly believed that in World War I the defense was stronger than the offensive. But this is not entirely true, the problem was not the breakthrough of the defense - it was broken both by the Germans on the Western and Eastern fronts, and by the troops of the Entente. The problem was the development of a tactical breakthrough in operational. Having breached the enemy’s defenses, it was necessary to go to the operational field, but while they struck for hours of artillery strikes, they broke down the resistance of the divisions defending this sector, the enemy pulled up reserves, struck counterattacks. The offensive was exhausted.

So, in the Verdun offensive, the Germans inflicted an artillery strike for 9 hours, then they broke through the 4st and 1nd French defense lines in 2 days, but then the French reserves arrived and the German offensive ran out. But at the end of the war, new methods were found to crack the enemy’s defense - Tanks and assault groups. In May 1918, in the area of ​​Chmen-de-Dam, the artillery attack was reduced to 2 hours and 40 minutes and the assault groups were brought into battle, the front broke through for 10 days at 78 km in length and 60 km in depth.

Assault groups were selected to the positions of the enemy, threw them with grenades, burned with flamethrowers. They penetrated deep into the defense of the enemy, attacks from the flanks and rear destroyed the nodes of resistance. That is, the technology of breaking through the strong defenses of the enemy was tested in World War One.

In the 30s, the Germans supplemented the tactics of assault groups with tank units and regimental artillery. It’s clear that the possibilities for World War II increased sharply. aviation, now she also could cause significant damage to the defending side.

The armies received funds not only for breaking the defense, but also for entering the operational space. With a sudden strike by artillery, aviation, a strike by tanks, the defenses were punched. Independent tank, motorized subunits were introduced into the breach, the “outdated” cavalry units were also successfully used, they had the strength to deal with the enemy’s reserves, taking advantage of maneuverability and initiative. Artillery, as in the First World War, was still the main means of suppressing defense, no wonder it was called the "god of war." Without artillery, tanks could not function effectively, breaking through the defenses of the enemy. 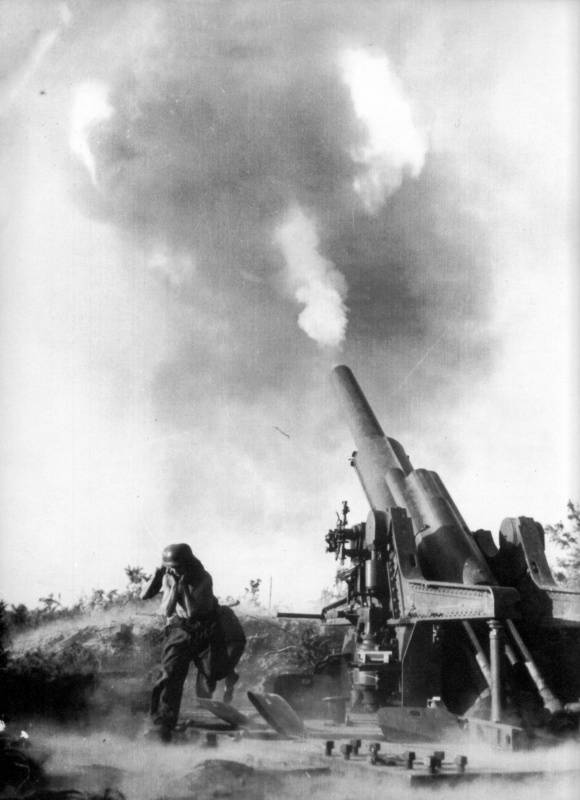 A shot of German heavy 240-mm howitzers on the positions of the Soviet troops in the area of ​​Perekop.

Examples of useful offensive actions of the Red Army

A number of operations of the Red Army were unsuccessful from the point of solving the tasks that were formulated in the orders, but this did not prevent them from thwarting some of the plans of the enemy.

- At the end of September 1941, the Wehrmacht command decided to focus on the complete seizure of the Crimea, replacing the German units on the front from the Dnieper to the Sea of ​​Azov, mainly by Romanian divisions. The mountain corps of L. Kübler began a march in the direction of the Crimea, our Southern front of the 9 and 18 armies at that time struck, the Romanian divisions could not stand the impact. To restore the position of a part of the corps, it was necessary to return, as a result, the corps was stuck in the Nogai steppes. This saved Sevastopol, the battles around the city moved to the positional stage, the Germans did not have enough strength to break the resistance of the parts defending the city.

- The actions of the 2 shock army near Leningrad have become quite widely known, thanks to its commander - A. A. Vlasov. The main problem of the troops defending Leningrad was the lack of forces and means for defense, although a narrow front favored defense. But in order to keep the city, it was necessary to continuously supply them with ammunition, food, etc. Opportunities "Roads of Life" were limited.

The Leningrad and Volkhov fronts held back considerable forces of the Wehrmacht, which the Germans wanted to free for other operations. The Wehrmacht command was preparing an operation to seize Leningrad: Hitler's directive No. 45 from 23 July 1942 to Army Group North. According to it, the assault should have been completed no later than the beginning of September. In support of Army Group North, the 11-I Army of Manstein stood out, freed after the assault on Sevastopol was completed. After rest and replenishment, she was transferred to the North. The operation was called "Northern Lights".

The Military Council of the Volkhov Front prepared a plan for the Sinyavino operation. The main role was to be played by the 8-I army, the auxiliary - 2-I shock army. On August 27, it began, the Red Army broke through the defenses of the German 18, instead of storming Leningrad, Manstein had to regain its position, and a battle unfolded south of Lake Ladoga. During the heavy fighting, the Red Army's offensive was stopped, and after the arrival of the remaining divisions of the 11 Army, the Germans launched a counteroffensive. It was organized from the north and from the south to cut off the troops wedged in, and by the 21 of September the Wehrmacht managed to surround the units of the Red Army. Attempt to release, as a distracting blow of the Leningrad Front, repelled. Circumstances did not sit on the ground and attacked, trying to break through. To destroy them in the area of ​​dense forest, the Wehrmacht had to pull artillery and aircraft from Leningrad. By October 2 the fights in the cauldron were completed.

The Wehrmacht successfully repelled the strike, the 2 Shock Army was destroyed, but the divisions of the Manstein 11 Army suffered significant losses, spent most of the ammunition that was intended for the assault of Leningrad.

The Soviet command, according to the recollections of KA Meretskov, who led the Sinyavino operation, did not know that the Wehrmacht was preparing an operation to storm Leningrad, did not know about the transfer of significant forces from the Crimean Peninsula, about the additional concentration of large aviation and artillery forces. However, the command of the Wehrmacht did not know about the impending Soviet operation. Both sides were able to keep their plans a secret, using measures of disinformation, masking, secretly moving troops.

The strike of the German 11 would most likely be fatal for Leningrad. The storming of Leningrad was prevented by the blow of the Volkhov Front, and there was no such task, the offensive operation was being prepared in the general plane of the Red Army’s offensive strategy.

After this battle, the 11 th army was transferred to the South, there were fierce battles. 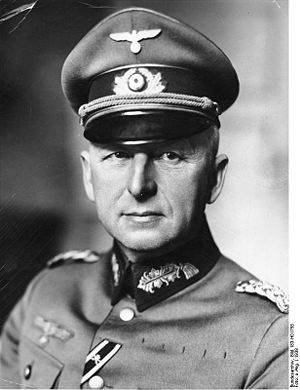 To sum up: the passive actions of the army are disastrous for it; even a strong defense is being broken through and developing an offensive. The command of the Red Army in 1941-1943 years did the right thing, which counterattacked and conducted offensive actions. Another question that often lacked the strength and ability to build on success, or consolidate it. There was an understanding that it was necessary to strive to seize the strategic initiative by all means. The defensive strategy is detrimental in moral and psychological terms, it keeps soldiers and commanders in a “hanging” state of uncertainty. Suffice it to recall the Russian army in 1812 year - she demanded a battle, stop retreating. All our best (Svyatoslav, Alexander Nevsky, A. Suvorov, Ushakov, and others) and not ours (Hannibal, Alexander the Great, Napoleon) preferred the offensive to defense.