CNN: Donetsk activists are not associated with Moscow 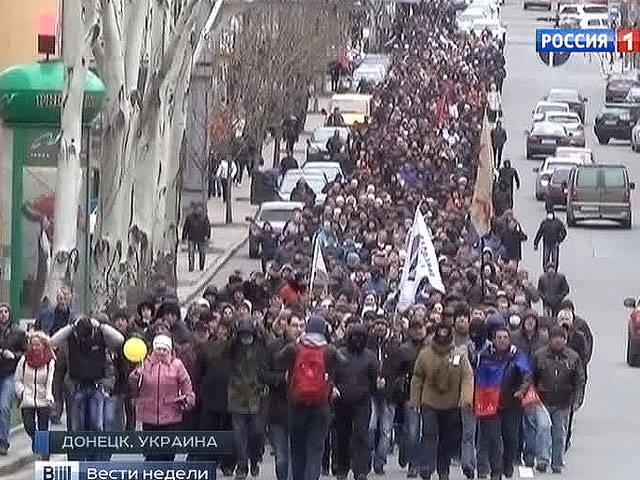 At the same time, CNN correspondent Nick Payton Walsh notes that self-defense units in Donetsk are nevertheless well armed and demonstrate a high degree of coordination.

“Only one thing is clear: they are well coordinated with each other, all events take place in precisely designated, strategically important places that can be said to create a ring around Donetsk. All these places are located on the outskirts of Donetsk region. The geography of events is in itself rather curious. The timing is also curious, of course - he points out that in all these events there is an essential element of strategic planning that guides where and when to whom to go, "Russia T cited Nick Walsh oday

The American correspondent emphasizes that according to the descriptions of "little green men" who acted on the Crimean peninsula, one could quite clearly see that these were Russian troops, only without distinctive signs.

The situation is different in the east of Ukraine.

"Here, among the militia, there are people of different ages. They wear a uniform of approximately the same type, also without distinctive signs. They are fairly well armed and do demonstrate a significant level of organization. Obviously, they are not new to this business, but where could they have acted before - Unknown, "- emphasizes the American correspondent.

At the same time, Nick Payton Walsh has one doubt. This is the one who leads the scattered self-defense units.

“Watching the development of events, you are convinced that someone is in charge of all this. It’s hard to imagine that these people are just local activists from Donetsk who have magically managed to carry out such a large-scale operation throughout the region over the past few days,” a CNN correspondent exclaims. .

In Zhdanovka in the Donetsk region twenty supporters of federalization seized the building of the city council. It hoisted the flag of the Donetsk Republic. Europe demands from Russia to condemn the actions of residents of eastern Ukraine. European Commissioner for Neighborhood Issues Stefan Fule appealed to Russia to condemn the seizure of administrative and other buildings in the south-east of Ukraine.

The 25 th brigade of the Airborne Forces of Ukraine stationed under Slavyansk moved to the side of the people's militia.

The people's militia in Lugansk issued an ultimatum to the regional authorities, demanding that 16 of April decide on who they are and who the army is with.

In this case, Lugansk activists have not yet gone to seize the building of the regional state administration. The leader of the Lugansk people's militia, Aleksei Mozgovoy, stressed that the Lugansk people's militia does not intend to surrender weapon until the conflict is resolved. He expressed the hope that the authorities of Lugansk and the region will support the desire of residents to live not by order of Kiev.

The president of Ukraine, Oleksandr Turchynov, previously appointed by the Verkhovna Rada, announced the start of an anti-terrorist special operation in the east of the country. By decision of the National Security and Defense Council, the army will participate in the operation together with the SBU. Turchinov stressed that he hopes to avoid a repetition of the Crimean scenario, and intends to prevent human casualties. Turchinov issued an ultimatum to the Slavyansk self-defense forces demanding to lay down their arms until April 14 in the morning.

The US Central Intelligence Agency responded to the accusations of the exiled President of Ukraine Viktor Yanukovych. The politician told 13 on April that the decision on the military special operation in the south-east of the Republic of Kiev was made under the influence of the American intelligence chief John Brennan.

"Like other representatives of the US government, Brennan is convinced that only diplomatic methods are the only right way to resolve the conflict between Moscow and Kiev," said CIA spokesman Tod Ebitz.

However, Ebits declined to comment on Brennan’s trip to Ukraine itself, and left unanswered the question of whether it had a place or not.

Ctrl Enter
Noticed oshЫbku Highlight text and press. Ctrl + Enter
We are
The action “Military service under the contract is your choice!” In Rostov-on-Don: future contract servicemen, exhibitions and “Russian Knights”
Military Reviewin Yandex News
Military Reviewin Google News
107 comments
Information
Dear reader, to leave comments on the publication, you must sign in.