Yatsenyuk made concessions in all matters 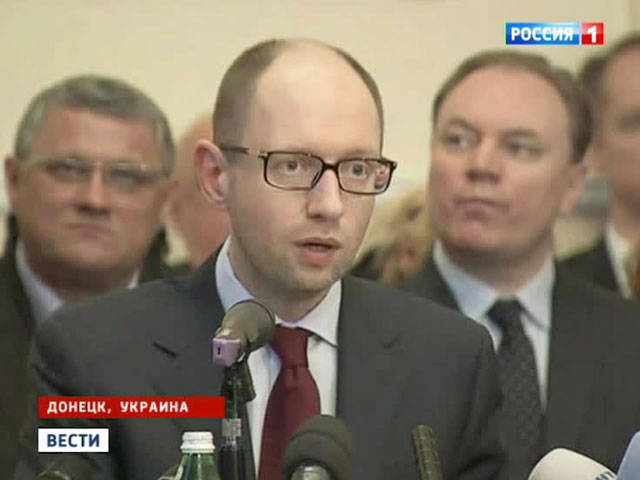 Today's event, which occurred in the South-East of Ukraine, seriously changes the whole balance of power. Spetsnaz "Alpha" refused to storm the administrative buildings, which hold supporters of federalization. The commanders said that the special forces had been created to free the hostages and fight terrorism, and not against the people, and the Alfa fighters would operate solely within the law.

This was a response to the demands of the Maidan authorities to use force. In many ways, this is why Kiev doesn’t have anything else but negotiations. At an emergency meeting in Donetsk, where almost the entire post-coup power arrived, the word was already heard.

Morning in Donetsk began with the sad news. The explosion of methane in the mine named after academician Skochinsky claimed the lives of seven miners. It was at this mine that Prime Minister of Ukraine Arseniy Yatsenyuk planned to come. The program of the visit was changed, the meeting in the chamber of commerce began with a minute of silence.

Then Yatsenyuk moved to the main. The ultimatum of his Minister of Internal Affairs Avakov did not have any consequences, and so Kiev seems to have come to negotiate.

"I want to clearly state that the central government is not just ready for dialogue with the regions, but ready to fulfill those legal requirements and desires of every citizen of our country. And within the framework of the constitutional amendment we will be able to respond to all aspirations and trends, every specificity every region that is today, "- says Arseniy Yatsenyuk.

All the aspirations and trends that the Ukrainian Prime Minister spoke about were left behind the fence. Anti-Maidan activists were not invited to the meeting. Those who came without an invitation were not allowed. About language Yatsenyuk spoke himself, and, in Russian.

“The government is consistent in its language policy. The Kolesnichenko-Kivalov law works. No one, under any circumstances, will restrict the use of the language in which a person is used to communicate. Including the Russian,” promises a high-ranking official.

At the same time, not a word about the document flow, which is generally conducted on the sovereign Move. Not far from the premiere, the governor Taruta, who had not been seen in Donetsk all week, was already fired by the people. But the mayor of Donetsk, Lukyanchenko, took the floor, proposing, together with the adoption of a new constitution - this should happen before the election - to resolve the issue with the referendum.

"It is necessary to offer people an all-Ukrainian referendum or a poll to approve a new constitution, so that people can see that their legal requirements are implemented, and the whole country agrees to live by the new rules," Lukyanchenko suggests.

At this time, the law on a local referendum, which lay in the table for a year and a half, has already been adopted by the Verkhovna Rada in the first reading. Will there be a sequel?
“And Yatsenyuk today in Donetsk, as Vladimir Semenych (Vysotsky) sang, struck himself in the chest, and everyone in Kiev says that they already agree. But there is no law. Now we will see how they quickly endure the second reading, and how they will accept it. And this will, in fact, be evidence that they hear the southeast, "said Alexander Khryakov, chairman of the Donbass electoral committee.

Having canceled a visit to Donetsk TV, Yatsenyuk goes to Dnepropetrovsk. At parting, adding that it is necessary to urgently release all captured buildings and surrender weapon. At the barricades at this time, bonfires are burned out and they are warming themselves in every possible way - it has become cold again in Donetsk. Self-defense fighters have to work as bodyguards at the crew of the Ukrainian channel "TSN". The other day, the channel spread the information that according to polls only six percent of residents speak in the Donbas referendum. For this and all the previous lies, the presenter was presented with colorful accompaniment of the reportage and shouts of “Shame!”.

But the candidate for presidency Oleg Tsarev, who came to the rally, was greeted by people warmly - not at all like the day before in Odessa.
"You believe me, I will not betray you," says Tsarev.

The interim government of the proclaimed Donetsk Republic today opened a current account, donations have already begun to flow to the budget.
Today’s visit to Donetsk made it clear that official Kiev finally heard calls from the East, but nobody wanted to see the barricades with their own eyes and go out to the people. On the eve of the weekend, when, according to tradition, tens of thousands of people take to the streets, there will be something to discuss. While all the statements of Kiev, people are wary. The defense of the building has not been canceled, it is still too early to disperse. But the wind of change is already palpable.

Ctrl Enter
Noticed oshЫbku Highlight text and press. Ctrl + Enter
We are
During an explosion at a coal mine in Soma, more than 200 people died.Alpha Calendar for 2013 Year
Military Reviewin Yandex News
Military Reviewin Google News
177 comments
Information
Dear reader, to leave comments on the publication, you must sign in.