Fakes are a weapon of power 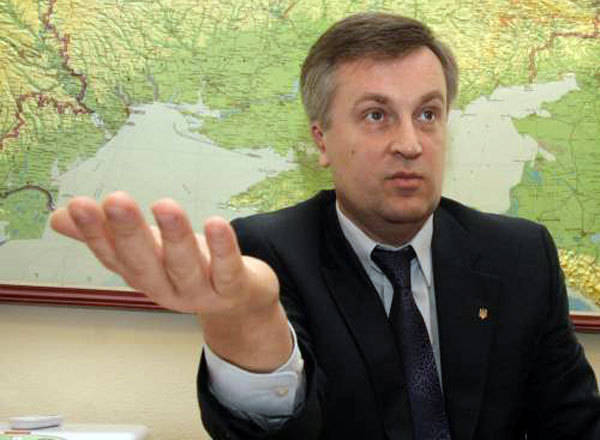 56 hostages released from the building of the Lugansk Security Service of Ukraine, captured by the rebels, exist only in the rich imagination of Mr. Nalyvaychenko, who is trying to steer the process of “liberation” on the spot. This is a fake used in the information war against the eastern regions. Fake is andnews»About the refusal of the rebels, staying in the building of the Donetsk regional administration, to create the Donetsk People's Republic. The racially correct media readily replicated this message, “attaching” to it a mocking headline: “The self-proclaimed Donetsk Republic did not last a day”.

In reality, everything is exactly the opposite: the barricades in the Donetsk Regional State Administration are being strengthened, and the number of people who have come to support the rebels is constantly growing. Another example of fake - the posts of Acting Minister of the Interior Arsen Avakov in his cozy place at the "UE". Prior to stripping the building of the Kharkiv Regional State Administration, Arsen joyously set out what was inside and all the “rebels and separatists” were defeated. In fact, the assault began only the next day. Why do the temporary authorities need these fakes? Naturally, to manipulate the mass consciousness, which is carried out with the help of central TV channels. Therefore, it is not surprising that the rightly racially reporters were simply driven out of protest. They are not allowed into captured buildings, they are kicked out of Kharkov square with kicks in the back, as happened with the correspondent of the TV channel “Ukraine”, who tried to tell about the “resistance of Euro-Maidan” in the live broadcast.

Fakes are necessary to illustrate the "effectiveness of actions" of temporary power. Arsen arrived in Kharkov and cleared the city of separatists. This becomes top news, and the racially correct media picks up in one voice: “the separatists are thrown out of the administration building”, “the assault passed without a single shot in twelve minutes”, “look at these magnificent special forces who stand so beautifully in front of the RSA ". Here are just many thousands of protest rally, which all day went to the Kharkov area, for some reason, they were ashamed to show. Only a fragment of “Zhorstky visited the Eurointegration, and the militants attacked masks”. Anigedeti! Where does the world community look? Meanwhile, in Kharkiv, it was not only "anigedety" that got it. A bus drove around the city with Nikolaev special forces, who had arrived to reinforce the "morally decayed local police" (Arsen Avakov). Ordinary passersby knocked out all the windows in the bus and tried to pull out the “bitches who came to our city”. This video went around the whole Internet. Not fake.

Now about the "hostages" in the building of the Lugansk Security Service, who were allegedly released on the night of the eighth to the ninth. Why do we need such disinformation? To expose the rebels not just "separatists", but also "terrorists" who take hostages and "mine the building." And there is an excellent reason to justify possible sacrifices during the assault: we were worried about the lives of innocent people. Question: who are these people? SBU workers? Not. Militiamen? Not. Anyone who wanted to join the rebels who had seized Luhansk SBU was warned: you know what you are going on, so think. According to the new, hastily improved BP law, they face life imprisonment. However, people deliberately made their choice. Moreover, in the morning there was information that over two hundred people holding the building were residents of Lugansk. More than five thousand people who came to support the rebels are also Luhansk residents. At night, in anticipation of the assault, they sang the anthem of Russia. Even Euronews showed this video with thousands of included mobile phone screens. True, without sound. I must say, the spectacle was impressive. Thanks to “euromaidan” for the special effects. There was no assault because there were too many people in front of the SBU. This time. Secondly, the level of moral readiness of special forces should not be overestimated. They see that the whole city has risen. Understand that they will pass as soon as possible. That is how the manipulations begin: “they freed the hostages”. This is victory! In fact, Sergey Tigipko was bargained with some kind of fright, but was sent. If you consider him a hostage, then yes, they were released.

Storm was not in Donetsk. All for the same reasons. In front of the barricades, benches were placed, on which exclusively peaceful Donetsk grandmothers sat and snapped sunflower seeds. Meanwhile, a man with a pot on his head, a fearless fighter of the invisible front, the leader of the "Information Resistance" D. (moron) Tymchuk told about the next secret plan of the Kremlin. Previously, only Paruby owned all the information about the plans of Vladimir Vladimirovich and three times in a row tore them off. Now here's another man - "pot" appeared. According to him, at night at the border passages will be organized, along which a stream of Russian armored vehicles will rush into the country. This is what kind of idiot you need to be to invent such nonsense? Why armored vehicles passes? Have you seen this parody of the border? Even the legendary moat of Taruta is easy to drive around. And in fact there were gifted people who readily began to replicate this garbage. Exactly such “informational fighters” with a pot on their head and are soloed in the information space of the country.

We can say that the uprising has reached a qualitatively new level. If earlier in Lugansk, Donetsk, Kharkov there were “weekend” actions, then on April 6 a permanent uprising began. The fourth day, people go under the administrative buildings, defense infrastructure is organized, stable combat units appear, and communication is established. Everything that was on the Euromaidan is repeated today in the southeast. And there is great potential for expanding the rebellion. Kharkov has not yet spoken. In Nikolaev the situation has already been warmed up, and Odessa is simply ready. With fakes and distraction for an unusable object, you can disorient for some time the slaves of the “zomboyaschik”. However, this technique of manipulation is already becoming ineffective. True, sorry for the expression, already rushing out of all the cracks. Hryvnia hits every day, as the NBU aptly puts it, “historical drop records, ”price increases are becoming unmanageable, the government is clearly not in control of the economic situation. Have you heard Prime Minister Yatsenyuk with another statement about the "proximity of a billion dollar loan"? It’s been silent for several days. And after all, he has nothing to say except about the willingness of the West to help. But even children do not believe in the IMF. Interesting processes also begin in BP. More and more often the so-called "democratic majority" disappears. The speaker-president has to make titanic efforts to blackmail people's deputies in order to adopt, for example, a law on increasing responsibility for separatism. Few people drew attention to the following fact: on April 8, the Rada failed to vote for an extension of the so-called constitutional commission. But she had until April 15 to prepare the text of a new law, taking into account the "granting of broad rights to the regions." Turchinov proposed to extend the work of "constitutionalists" until May 15. Well, to maximize the end. After all, it was our “European partners” who demanded that a new Basic Law be worked out in accordance with the safely-hacked agreements of February 21. They would close their eyes to procrastination. However, now you have to say something on April 15th. What ?! They are not ready not only to change the Constitution, they are afraid once again to ruin the air. In Lviv, they seized the building of the regional prosecutor's office. Is this "separatism"? No, democracy, because it was captured by "people, yaks stood on the Maidan." The Supreme Court was blocked in Kiev and the judges were beaten. First, the Minister of Justice said that it was a democracy, then he began to talk about provocation. The Secretary of the National Security and Defense Council, the Deputy Prime Minister, the Minister of Internal Affairs and the head of the Security Service of Ukraine were just enough to shut up the “holes” formed on the eastern front. And if in Nikolaev it will explode? Whom to send there? Victoria Syumar? Problem.

A lot of trouble was caused by the temporary power of foreign mercenaries, who were spotted near the Kharkiv Regional State Administration. Even the State Department was forced to give a refutation: they say, there are no American citizens in the zone of the Ukrainian conflict. Nervousness State Department is understandable. Even if they are representatives of a private security structure, it is still a matter of military intervention in the internal affairs of another country. And if they catch a mercenary? Can you imagine how uncomfortable they will be? This scenario is more than likely. Temporary power is rapidly losing control of the situation. The maximum that it is capable of is to wage an information war, organize provocations and stimulate militants with a cache. And yes, the presidential election is already frustrated. How do you imagine “free” and “democratic” elections, when there is no place to gather even the district electoral commission, since the building is seized, and the presidential candidates negotiate for the release of non-existent hostages? Even in Afghanistan, NATO risked holding a presidential election only after the number of terrorist attacks had decreased to an “acceptable level”: no more than two per week. We have a whole rebellion.

And in addition: "Interfax-Ukraine" reports that "The Security Service detained 8 on April, a citizen of the Russian Federation who performed the tasks of special services to destabilize the situation in the southern regions of Ukraine. The report states that the detainee Maria Koleda, born 1991. arrived in Kherson 4 this April. April 7 Coleda was directly involved in the clashes under the Nikolaev regional administration, during which she used firearms weapon, resulting in, according to her, injured three people. The operatives found that on April X. M. Koloeda 8 reported to her supervisor in the Russian Federation that the activists had improvised improvised improvised explosive devices and reached an agreement on their acquisition of small arms. She also reported on the preparation of two sabotage groups (7 people from Kherson and 6 from Nova Kakhovka) to be sent to Donetsk to take part in the riots. “Koleda was also instructed to find out the state of armament of the State Border Service of Ukraine on the border of Crimea with the mainland of Ukraine and the possibility of getting from the Crimea, legally or bypassing the established checkpoints, persons who were forbidden by the SBU to enter Ukraine. During the detention, the Russians seized a traumatic pistol, converted to the firing of live ammunition and methodological recommendations for the preparation of sabotage groups. ”

The spy was detained by the Ukrainian special services: twenty-three years old, firing live ammunition, carrying with it “recommendations for training saboteurs”. Well, to what level should one descend in order to fabricate such fakes?

Ctrl Enter
Noticed oshЫbku Highlight text and press. Ctrl + Enter
We are
The path from the victim to the hunter
Military Reviewin Yandex News
Military Reviewin Google News
34 comments
Information
Dear reader, to leave comments on the publication, you must sign in.