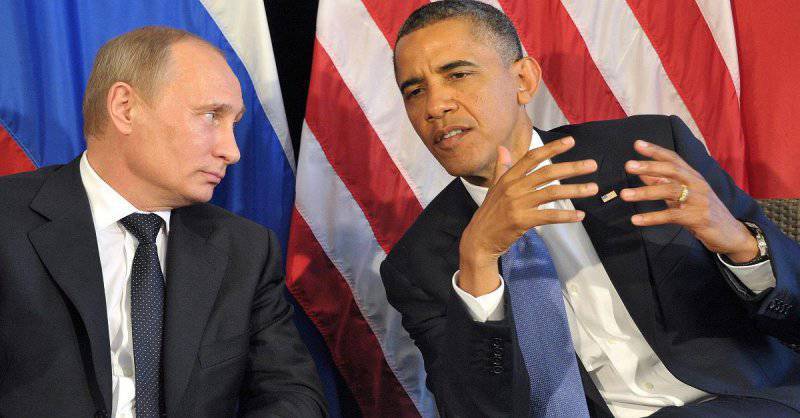 The confrontation of the East and the West over Ukraine, which led to the annexation of Crimea by Moscow, but which began long before that, may become the most serious international crisis in the last half a century, with the most fatal crisis. Its settlement by negotiation is possible, but the time for this will expire quickly.

A new cold war has already come to Europe - but not to Berlin, but to the borders of Russia. It could be worse. If NATO forces go in the direction of western Ukraine or to its border with Poland, as the zealous fighters of the Cold War in Washington and Europe call for, Moscow can enter its army into the eastern regions of Ukraine. As a result, there will be the danger of a new war comparable to the 1962 Caribbean crisis of the year.

Even if the result is a non-military “isolation of Russia,” as the West is tirelessly repeating today, the consequences will be very serious. Moscow will not be subdued, but will unfold politically and economically eastwards, as she did before. First of all, it can conclude a larger alliance with China. The United States may lose an important partner in the fundamental issues of its own national security, from Iran, Syria and Afghanistan, to a new arms race and the spread of nuclear weapons. weapons and terrorism. And another very important point will be that the prospects for the resumption of democratization in Russia will be postponed by at least one generation.

Why did this happen almost 23 years after the end of Soviet communism, and Washington and Moscow proclaimed a new era of "friendship and strategic partnership"? The Obama administration and the overwhelming majority of the American political and media establishment blame President Vladimir Putin for everything. They argue that Putin, with his "autocratic" methods of government in domestic politics and with "neo-Soviet imperialist" politics outside the country, has degraded the partnership that Bill Clinton and Boris Yeltsin created in 1990-s. This fundamental message lies at the heart of the main plot-thematic picture of two decades of Russian-American relations, and now of the Ukrainian crisis. 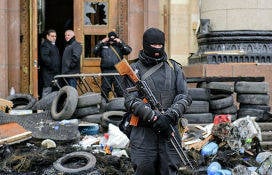 But there is another explanation that is more consistent with the facts. stories. Starting with the Clinton administration, with the support of all subsequent presidents (Democrats and Republicans) and congressional structures, the West, led by the United States, inexorably advanced its military, political and economic forces closer to the borders of post-Soviet Russia. Such a position on the principle of "the winner takes all" finds support from both parties and exists in various forms. It is being implemented by NATO, moving to the east and already entrenched in the three former Soviet republics on the Russian border, and now also creating missile defense facilities in countries neighboring Russia.

One of the forms is the US-sponsored “promotion of democracy”, when non-governmental organizations are engaged in Russia's domestic policy more actively and in depth than is allowed to be done by foreign organizations in our country. Further, this is the bombing in 1999 of the Slavic ally of Moscow, Serbia, which was forcibly deprived of its historic edge of Kosovo. This is the deployment of US military forces in the former Soviet republic of Georgia (which, along with Ukraine, Putin has long declared a "red line"), which in 2008, led to a short war. And it’s also unfair negotiations, called “electoral cooperation,” when the White House knocks concessions from the Kremlin, but doesn’t reciprocate, and then breaks its own promises.

All this is unfolding, as some supporters of such an approach sincerely believe, in the name of "democracy" and the "sovereign choice" of many small countries involved. But everyone understands that the basis of all this is a well-defined geopolitical agenda. During the first conflict between East and West over Ukraine, caused by the Orange Revolution 2004 of the year, influential Republican columnist Charles Krauthammer (Charles Krauthammer) announced: “First of all, it’s about Russia, and only then about democracy ... The West wants complete the work begun with the fall of the Berlin Wall, and continue the European march to the east ... And Ukraine is the biggest trophy here. ” The late Richard Holbrooke (Richard Holbrooke), who almost became Secretary of State for Democrats, agreed with him, expressing his hope that Ukraine would break with Moscow and “accelerate” Kiev’s entry into NATO.

The fact that the Russian political elite has long been very doubtful of American intentions makes Krauthammer’s conclusions even more logical and true. By officially announcing the annexation of the Crimea by 18 in March, Putin (not for the first time) gave way to Moscow’s long-standing discontent. Some of his statements are wrong and alarming, but others are quite reasonable, or at least understandable. And there are no “crazy ideas” in them. Remembering Western (mostly American) political figures since 1990, he complained bitterly that these people "tried to push us into a corner", "lied to us many times", and in Ukraine "crossed the red line." Then he warned: "Everything has its limits."

Thus, we are left with contradictory interpretations and a political crisis of misunderstanding, which often becomes the prelude to war. Putin has been demonized for many years, and therefore Washington rarely takes seriously his statements on behalf of Russia. For example, the former Secretary of State Madeleine Albright called him a speech about the annexation of the Crimea “complete fiction”. And nothing in Washington’s statements weakens Putin’s quite reasonable confidence that the trade agreement with the EU rejected in November by Ukrainian President Viktor Yanukovych, as well as the overthrow of Yanukovych during violent street protests in February, were intended to break Ukraine’s centuries-old ties with Russia and bind this country to nato. (Today’s crisis was provoked by the reckless ultimatum of the European Union, which he put forward despite Putin’s proposal for a “trilateral” agreement. This forced the elected president to split the country to make a choice between the West and Russia. And the former German chancellors Helmut Kohl and Gerhard Schröder. In the EU’s proposed “partnership” plan, there were unobtrusive provisions on “security”, implying a “rapprochement” between Ukraine and NATO policy — although there was no mention of a military alliance It was.) 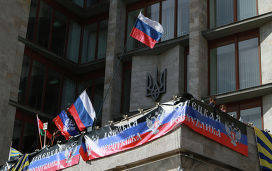 Meanwhile, militant rhetoric sounds louder and louder on both sides, military forces are mobilized, and provocations are intensifying in the political civil war in Ukraine. Today there are tough guys in black masks and armed militants, there are "spontaneous" separatist demonstrations with slogans about secession, and some leaders in Kiev make extremist statements. Now everything is possible - a real civil war, the dismemberment of Ukraine and something worse. Reciprocal “sanctions” are simply an additional factor that only exacerbates the situation.

From this crisis, you can find a diplomatic way out. Putin did not start it, he did not need a crisis. Among other things, the crisis has destroyed the achievements of his Olympics in Sochi. He did not initiate the beginning of the Cold War, which was conceived in Washington even long before Putin came to power. For this reason, Western politicians should take seriously the old adage that "there are two sides to any story." Is Putin right when he told 18 in March that Russia, “like other countries, has national interests that must be taken into account and respected,” especially near its borders? If the answer is no, as is almost always the case with 1990, and if Putin is right when he indignantly declares that “only they can be right,” in this case war is possible, if not now, then over time. But if the answer is yes, then Putin’s foreign minister’s proposals for March 17 may be the beginning of negotiations.

If we talk about them briefly, then these proposals are about creating an American-Russian-European contact group, which will require the immediate disarmament of the Ukrainian military units in accordance with the decree of the Ukrainian parliament from April 1; the creation of a new federal constitution granting greater autonomy to the pro-Russian and pro-Western regions; holding presidential and parliamentary elections under international observation; the formation in Kiev of a “politically military-neutral” (that is, non-NATO) government, in which there will be no extremely nationalistic (some observers even say, “neo-fascist”) ministers; as well as the preservation of Russian-Ukrainian economic relations, which are vital for both countries. Moscow, in turn, recognizes the legitimacy of the new government and the territorial integrity of Ukraine, thereby dissociating itself from the pro-Russian separatist movements that operate far beyond the Crimea, but not abandoning the annexed peninsula. She will also vote on the resolution of the UN Security Council, which will confirm the fact of the settlement, and possibly help to find the many billions of dollars that are needed to save the country from financial collapse.

The Obama administration’s response to Russian proposals, which it practically does not publicly recognize, is less than adequate. Agreeing on the need to develop a federal constitution for Ukraine and the holding of presidential elections, the White House opposes the new parliamentary elections, although ultranationalist deputies and their supporters in the streets strongly influence and even threaten it. Recently, they threatened to impose their will directly, entering the building of the Rada. In addition, it is not entirely clear how much Obama shares Putin’s concern that the militia from the militia are increasingly destabilizing the country. 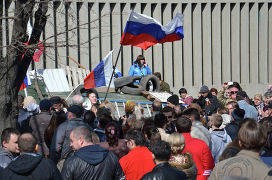 Meanwhile, the White House says that Moscow should annul its decision on annexing the Crimea (which is impossible), withdraw its troops from the Ukrainian borders and recognize the Kiev regime that was not elected by anyone. Moreover, Western statements in no way indicate that he has no intention of introducing Ukraine into NATO. In fact, the NATO political leader, echoing Krauthammer’s statements a decade ago, told 31 in March that the tasks of the military alliance had not yet been accomplished. Moreover, Brussels can take advantage of the crisis and place troops even deeper in Eastern Europe, closer to the Russian borders.

Even if these differences can be smoothed over, is it possible to count on Putin as a reliable partner in such negotiations? “Demonizing Vladimir Putin,” wrote Henry Kissinger recently, “is not a policy.” Few people remember that the Russian leader since 2001 has helped the US and NATO troops in Afghanistan, that in 2010, he supported tightening sanctions against Iran, which ambiguously called for mutually beneficial cooperation with Washington, which generally pursued a foreign response policy, with the result opponents of compromises from the Russian political camp accused him of appeasing the West (no, Putin is by no means the all-powerful "autocrat." There are many political trends around him at the highest level).

Consequently, a lot now depends on President Obama. The American leader will have to rise to a level of leadership that will allow him to rethink and re-formulate the policies of both parties that have been implemented for two decades, which has led to a catastrophe. He will be forced to do this in an atmosphere of frantic Russophobia and hatred of Putin. But there is a precedent. Thirty years ago, Ronald Reagan, the most active of all American presidents pursuing a Cold War policy, felt that he had quite a lot in common with Soviet leader Mikhail Gorbachev, and met with him in neutral territory, despite protests by nearby advisers and many party members. Together, the two leaders made such historical changes that they thought would end the cold war forever.

Ctrl Enter
Noticed oshЫbku Highlight text and press. Ctrl + Enter
We are
Ukrainian crisis: not only Putin is to blame (The Nation, USA)Results of the week. "Of course, he is guilty, but he ... is not guilty ..."
Military Reviewin Yandex News
Military Reviewin Google News
68 comments
Information
Dear reader, to leave comments on the publication, you must sign in.