Kharkiv can not understand the actions of Kiev 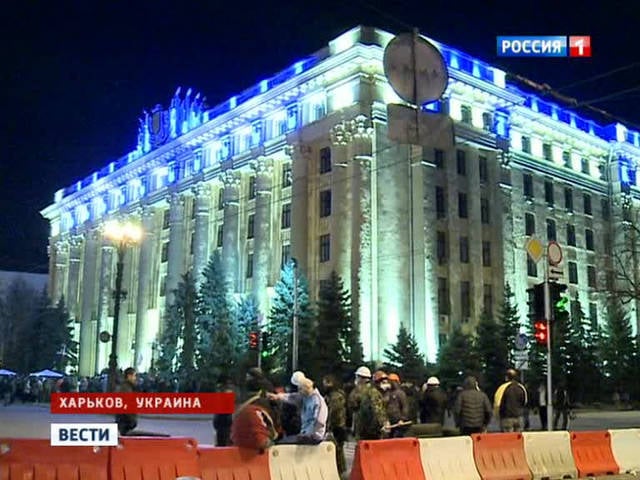 In Kharkov - general arrests: the Kiev authorities staged a real hunt for supporters of federalization. Approximately 100 people are already behind the bars - one of those who expressed no confidence in the regional council and proclaimed the creation of Kharkiv People's Republic. Stripping in the near future will begin in law enforcement. Maidan Interior Minister Avakov has already promised to dismiss almost half of the police because they did not want to fight with fellow citizens.

On Freedom Square all day they demanded the release of activists of the Kharkov self-defense. The day in Kharkov began with a massive sweep. First, activists were detained, who at night once again captured the regional council. About a hundred people were in the building - all of them, as the eyewitnesses say, were handcuffed and loaded onto a bus.

The Interior Ministry said all the detainees were placed in jail. Nobody really knows what. Relatives of the militia cannot communicate with them. There is evidence that supporters of federalization were taken to other cities.

The city is undergoing a police operation. There is a non-resident, and perhaps even foreign special forces. The citizens heard people in black unmarked and in masks talking to each other in English. Criminal proceedings are already being instituted against the detainees for organizing mass riots.

The footage shot in another district of Kharkov shows how activists with St. George ribbons were laid on the asphalt. Everything withdrawn from them weapon - wooden stick and air gun. At night, the Kharkiv residents of the regional administration took the building by storm. Police crossed the line, used clubs, tear gas and smoke grenades. After 5 minutes, the building flared up.

Activists say: at some point, the police began to push them out of the building. The guards used water cannons. Kharkiv surrounded and burned tires, dumped on the porch. The fire on the wall got to the top floor. Black smoke from burning tires through open doors and broken windows fills the building. The policemen simply smoked out of the council house — they left through the back door.

The townspeople again occupy the administration and hang out the Russian flag. The administration building at one o'clock is one and a half thousand people. People can no longer look calmly at what is happening in the city. The townspeople are sure that the guards who were ordered to use force were not from the local, they were brought from Poltava on several buses by order of Arsen Avakov, who arrived in the city to suppress the uprising. Citizens block one of these buses on the street. Another bus with special forces locals threw stones.

Around the same time, activists with ribbons of St. George burst into the office of the city television channel ATN. Kicked out the door on the ninth floor. In the central hardware - only technical staff. Citizens demand to stop broadcasting of the channel, replicas are heard that “the channel belongs to Mr. Avakov - the self-appointed minister”, and that “the channel spreads lies and provokes conflicts”.

The militiamen do not break anything, calmly inspect the office, study the photos in the corridor, and the literature in the office of the management about Maidan and its leaders. Kharkiv are ready to nominate their candidates - from among the deputies. On the eve of the alternative was formed Rada.
The current regional parliament does not want to hear the voice of the people. New deputies voted unanimously for the proclamation of a sovereign state - Kharkiv People's Republic.

“Today, we, the Kharkiv People’s Republic, are calling for a strike and arriving at the square,” says people's deputy of the Kharkiv Regional State Administration Dmitry Kovalev. “We know that this is technically possible.”

The deputies decided to consider the declaration of sovereignty valid after the general referendum. Meanwhile, it is already clear: the arrests in the city will not stop. And in a more quiet time, those who disagreed with the new government were brought to justice. One of the leaders of "Antimaydan" Ignat Kromskoy, nicknamed Topaz, who was placed under house arrest, went on the run. He either went underground, or left the country. Those who are now being taken into custody are unlikely to be allowed to go home.

Minister Avakov boasted on the Internet that the seizures of activists go smoothly and without firing a shot. It's true. Militiamen with batons are unlikely to oppose machine gunners. In addition, the head of the Ministry of Internal Affairs is not satisfied with how the local law enforcement officers have been working all this time: they, apparently, did not sufficiently severely disperse the protesters. In some cases, for example, during clashes with the radicals of the Right Sector, the policemen openly sided with the townspeople. A third of Kharkov law enforcement officers Avakov is going to dismiss for sabotage.
Kharkiv residents repulsed special forces on Chernyshevsky street

Ctrl Enter
Noticed oshЫbku Highlight text and press. Ctrl + Enter
We are
Reports from the militia of New Russia for 27-28 September 2014 of the year
Military Reviewin Yandex News
Military Reviewin Google News
116 comments
Information
Dear reader, to leave comments on the publication, you must sign in.