Write correctly - that our native language was not an enemy to us, but a friend! 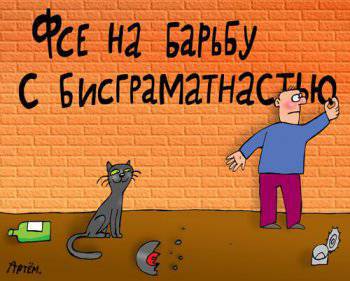 Linguistic illiteracy overcame us to the point that even writers and journalists shamelessly confuse “not” and “neither”, separate and coherent writing, and do not put commas at all ... freebie. That is, instead of finding the right word or rule in the same Internet, many use proofreading WORD, even without delving into the essence of this service.


And this is not a universal literacy at all, but only an identifier of cases of spelling unfamiliar to a computer program. Moreover, spell checking (red underline) and grammar (green wavy) are two very different functions. And if the first with the ability to use it is very useful, then the second is not only useless for those who do not firmly know Russian, but also harmful.

The computer checks the spelling using its vocabulary, which contains a limited volume of word forms: “forest, forests, forest; walk, walk, walk ... "And when he emphasizes something in red, this is not necessarily a mistake, but only an unknown combination of letters. Many Russian words, both archaic and the newest, colloquial, and simply overlooked, fall into this zone of obscurity. WORD, for example, does not know such words as rup, glasenap, gadget, sukup, unformat, handon, pinch, rap and so on. But at the same time he still offers the correct spelling in his view - a word he knows, which is close to the unknown. For example, instead of “unformat”, he will offer “not format” or “non-formal” - which would mean something completely different and in the context will be just an error.

To avoid such errors, you should carefully re-read the underlined word, and if this is not an obvious slip of the word, against which the spell checker is good, just look in any Yandex dictionary. If there is such a word, add it with the appropriate button to the dictionary of your WORD, in order not to stumble again in the same place. By the way, for a dozen years of work on my computer, I added hundreds of previously unfamiliar words to his database. The main thing to remember: the red bar - just evidence that the word is unfamiliar to the computer.

But grammar checking is more confusing than it helps, and therefore it is better to refuse it altogether. Spelling is still a pretty mechanical thing; punctuation implies thinking about the context, but the computer is not able to think. He only uses his own type patterns: the definition requires a definable word, the predicate - the subject, a comma is needed before “what” and between homogeneous members of a sentence. But the subject in the Russian language can be a verb, an adjective, and in general almost any part of speech. The predicate is composite, not all homogeneous members are separated by commas - for example, “the great Russian writer”, before “what” and after “well”, the comma is also not always needed. There are such cases - the sea, the patterned program in them is powerless, because every now and then it gives a false signal about a violation of agreement and punctuation. And a lazy person mindlessly accepts false clues that cripple the meaning of his writings.

Here are the first examples from the articles of professional journalists:

"So that the selective enthusiasm of Luxembourgers is well warmed from the outside." The comma here is a clear mistake, because "so that" is one composite union. But the computer is not on the mind, it responds only to the absence of a comma before the "what", offering to insert it. And the illiterate writer stupidly accepts this, reassuring himself that the green wavy then disappears.

By the way, in the previous paragraph, the computer emphasized the whole second sentence to me: they say “perhaps the proposal is inconsistent” - without recognizing the subject already in combination “so that”. He also emphasized the word "green", not realizing that this is not a definition, but part of the compound subject "green wavy", expressed by two adjectives.

"He knew, however, did not take any measures." WORD formally demanded a comma after "nonetheless" as after the introductory phrase - but here it is a union, after which the comma is not put.

As part of the extra commas, there is one not absolute, but a good check: if the text does not suffer without a comma, you do not need to put it. For example: “By the way, here is another consideration,” here everything is clear and without a comma. But in the case of “By the way, coming up to the ravine, Vanya saw ...” the comma is needed, because without it, it turns out that not the writer leads this detail by the way, and Vanya went to the ravine by the way.

It is not necessary to put a comma after such words as "they say", "they say", "de", because it adds nothing to them.

But in general, there is no easy, universal method to avoid mistakes in punctuation. How to be? Only learn grammar; and if the multiplication of the multiplication table can be replaced with a calculator, then this is fundamentally impossible. But to catch up to elementary literacy is not such a terrible work. It is necessary to understand the principle of the placement of commas in complex and complex sentences, with homogeneous members, participles and verbal participations - it will be easier later. But what a joy to feel at home in your native grammatical forest and to see in punctuation marks not evil enemies, but faithful servants!

Let's say there is a rule: the participles are separated by a comma if they appear after the word to be defined, and the participle is always. But sometimes the verbal adverb can act as an adverb, serving as an inseparable feature of the verb, for example: “It hits the bull's eye without aiming”. Or: “Makhnimsya without looking!” It is here so merged with the verb that you simply can’t stick a comma between them. It is possible to substantiate its absence in the following way: in typical cases like “The boy ran, looking around,” the participle, as an indicator of some additional action, is easily replaced by the verb: “The boy ran and looked around.” But in the case of “waving” with such a replacement we get rubbish.

The Russian language also permits the so-called author's punctuation, when a comma, a semicolon, a dash serve not the formal, but the semantic component of the letter. Here is the case where the arrangement of punctuation marks according to the rules would have killed the beauty of Tsvetaeva's verses:

Washes away the best blush -
Love. Taste it
How tears - salt. I'm afraid
I will get up dead tomorrow morning.

Send stones from India.
When can we see each other? - In a dream.
- How windy! - Hello to my wife,
And that green-eyed lady.

That is, punctuation marks can even be put against the rules, but! This should have a solid semantic basis, otherwise they will consider it simply illiterate.

However, the function of checking the grammar can be useful - to search for clerks like: "My wife went to the store for bread." Spelling proofreader will not emphasize the erroneous word, so it is known to him, but it will emphasize grammatical. Therefore, it is worthwhile to include this function when the text is already written - to see if a similar slip has crept in somewhere.

And finally, the question of principle: why write at all correctly? The meaning will come true, with all the mistakes!

Well, firstly, not always - as in the classic school example: "You can not execute the mercy punishment." But there is also an aesthetic side: as an untidy-dressed person does not inspire confidence and the desire to communicate with him, the written untidy text repels the reader.

Contempt for the grammatical norms of the language not only ruins its expressiveness, but also entails contempt for the subject of description. The habit of doing something is somehow contagiously terrible: spitting on spelling spits on other rules and norms, multiplying the general chaos in our heads. Without grammatical fit, the language surrenders and degenerates - since all living things can only be kept in strict form for a long time, and the shapeless and chaotic is doomed.

You can kill and resurrect with a word, but to successfully master it, you must first write competently - this is how to keep weapon in order, otherwise it quickly loses its combat capability.

Ctrl Enter
Noticed oshЫbku Highlight text and press. Ctrl + Enter
We are
About Stalin and KhrushchevWhat you didn't want to know about England
Military Reviewin Yandex News
Military Reviewin Google News
69 comments
Information
Dear reader, to leave comments on the publication, you must sign in.