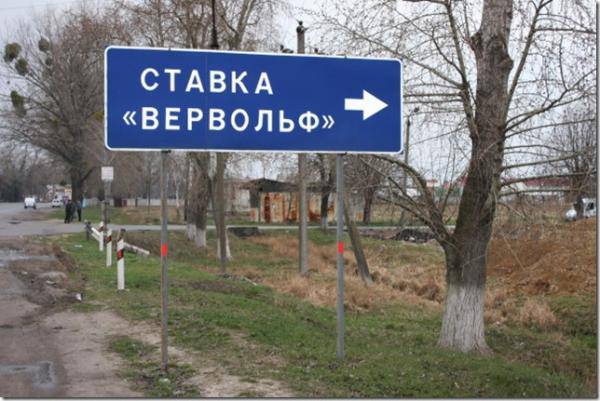 Sparse grove near the town of Kalinovka, Vinnitsa region, unremarkable both today and more than half a century ago. But for some reason these few hectares of land were chosen by the leader of Nazi Germany for his second home. On this piece of land, or rather, under it, in 1941, the Germans launched large-scale construction and created one of the most protected bunkers of that time. What lies deep underground, now nobody knows. And the wolf lair mysticism ("Wehrwolf" with it .- "armed wolf" or "wolf's den") still has not left the Vinnitsa land and terrifies those whom the night caught among the giant blocks of concrete between which trees grow.

Devil is more comfortable with evil

History never hid the fact that the Nazi leader was not indifferent to mysticism. The Fuhrer hoped that otherworldly forces would help him conquer the world, and threw hundreds of people at the excavations and searches for artifacts. Perhaps the site for the construction of "Werewolf" was chosen not only because of the convenient geographical location of the future rate. Many researchers suggest that the rate of Hitler is built on the ground, which has a powerful energy, and also - the "magic" potential. Many books and articles have been written about this. Those who had to spend the night on this earth, admit that without mysticism it was not done here. In the middle of the night there is constantly heard noise, rustle, barely visible shadows loom. Tea does not brew, water does not boil, the fire does not want to burn, barely smoldering. Such miracles have been celebrated here for a long time. Locals also fear this forest. They don't even want to come here without need.

Second home for the Fuhrer

The fear and caution of Hitler made the best designers of Germany and the general contractor of the German military construction organization "Todt" work hard. The leader of the Third Reich was always afraid of bombing, so "Werewolf" was built, taking into account all the wishes of the Fuhrer. According to the assumptions of researchers, "Werewolf" had six floors. The first three were "economic", then - "workers": everything necessary for comfortable living and working of the Fuhrer and his immediate environment was located there: rooms of the head of Germany, liaison, office of headquarters. The builders were tasked with reproducing the Berlin office as accurately as possible in the “Werewolf”. And, of course, the Germans did not economize on the safety of their leader: the thickness of the bunker overlaps reached from three to five meters! The structure was able to withstand a direct hit of the most powerful at the time of the bomb - weighing one ton.

“Werewolf” was actually a reduced copy of Hitler’s other Wolfschanger rate in East Prussia. It was a large barracks settlement in a forested area. The territory of the bet was divided into 2 zones: external and central. Under the most strict guard was the central zone. Its ground part included a 81 building made of wood. On the territory of "Werewolf" were located the working headquarters of Hitler, houses of commanders, barracks, bathhouses, canteens, commandant's headquarters, warehouses, pass offices, office, telephone station, swimming pool, gymnasium, Gestapo and other objects. The territory was camouflaged, all buildings painted in dark green. Trees and bushes are planted above the underground structures. Around the stakes were erected 36 observation towers. Electricity rate was supplied from Vinnitsa, but also, in reserve, there were 3 diesel generators. To the territory of "Werewolf" was laid railway line. 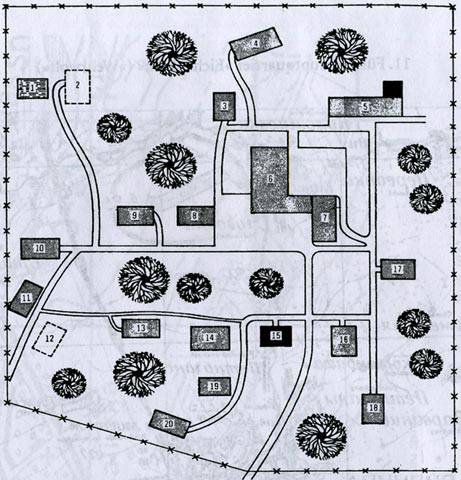 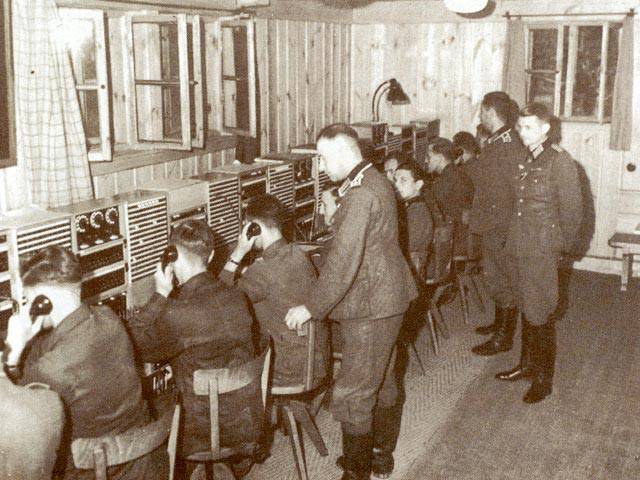 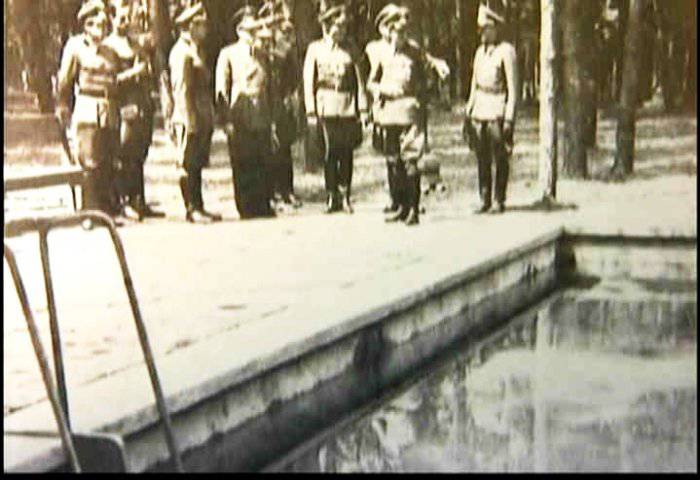 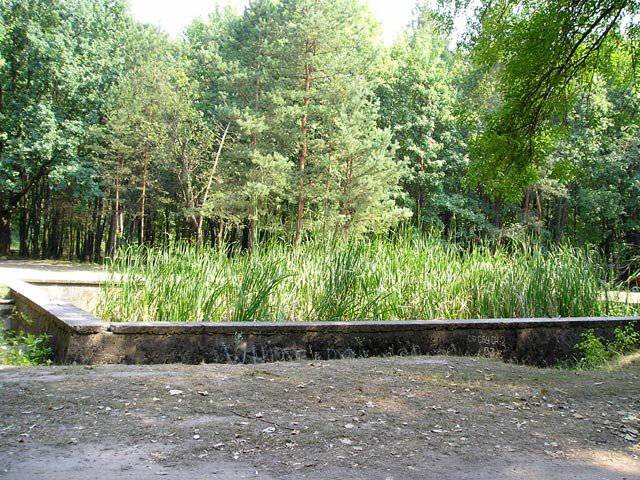 Pool in our time 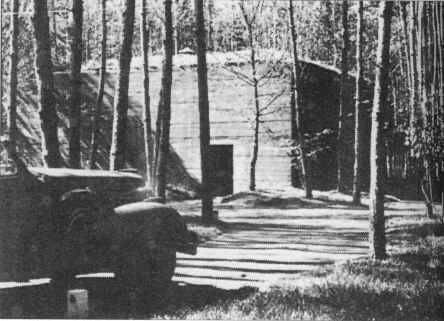 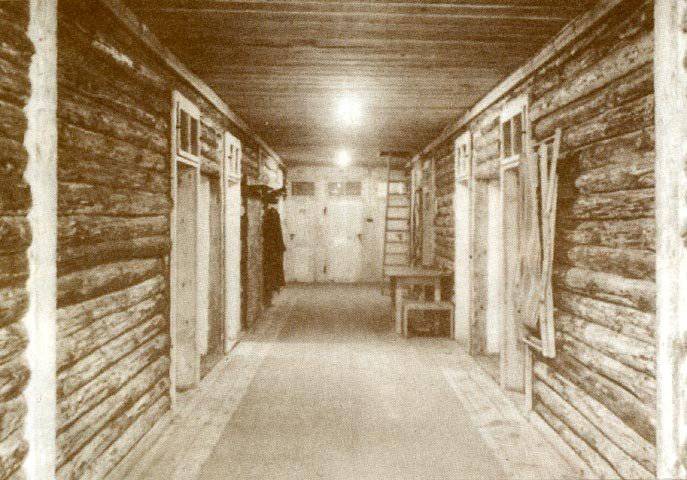 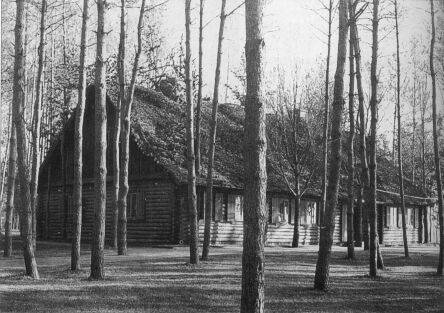 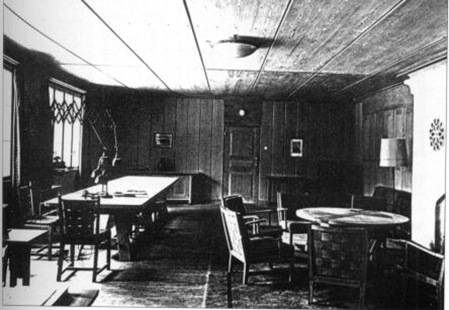 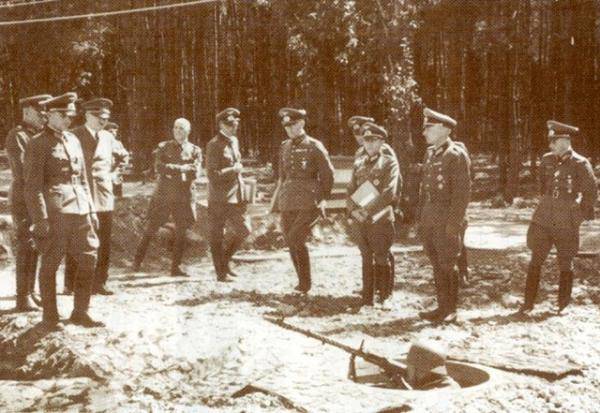 Hitler inspects the protection of the central zone

Even more than half a century later, huge concrete blocks, torn from the bowels of the earth by the hellish explosion, silently testify to the monumentality of the building and the quality of building materials that were used then. Concrete has withstood the influence of time and the onslaught of tourists, each of whom is trying to take a piece of bunker remnants with them. By the way, the locals first wanted to use building materials from the Werewolf in their farm. But they could not crush the giant pieces. As for the fittings, it still has not eaten rust. 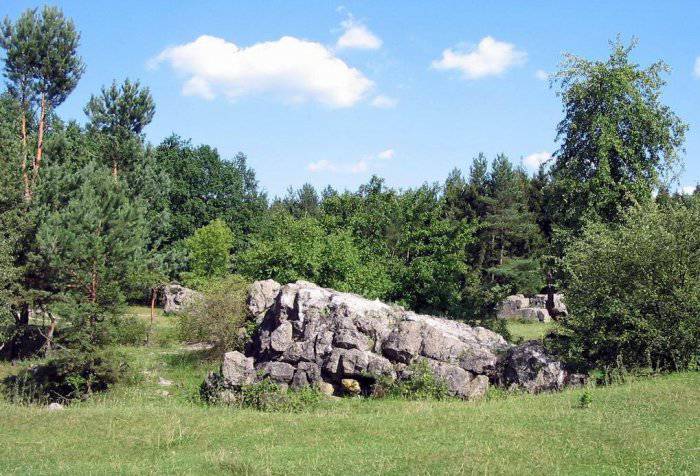 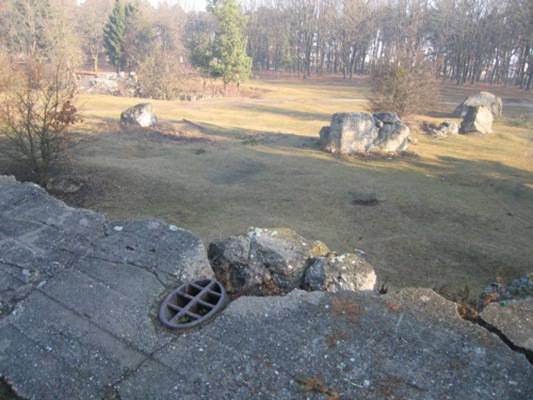 "Werewolf" in our time

Historians say that the Führer was in his bid at least three times. For the first time — when the bunker was built: Hitler arrived to personally receive the object. There was no partisan movement yet. During his first visit to Vinnytsia, he arrived by train. Some locals recalled that they had seen a smiling Hitler in the window of one of the cars, he was waving to people at the stations. But the more Nazi leader did not show such frivolous recklessness. Navigating to his headquarters later, he used an airplane, landed at the airfield in Kalinovka. A squadron of aces stood in a small town, ready to fight back any encroachment on the life of the leader of the Reich.

"Werewolf" guests are not happy

The Soviet government knew about the existence of Hitler’s stakes in the Vinnitsa forest and could not let out an object of such importance from under its attention. Therefore, during the offensive of the Soviet troops, the NKVD received an order to penetrate these forests ahead of the front line and to hold the bunker until the approach of the Red Army. At the same time, the Nazis had a clear order to blow up the underground structures so that they would not get to the enemy. But they did not expect that our soldiers would show such an onslaught, so they simply did not have time to blow up the bunker. When the first parts of the NKVD approached the Werewolf, all the buildings located on the surface — several security towers, a bathhouse, a club, and a casino made of wood — remained intact. But it was only the tip of the iceberg - the most important objects were at a depth of tens of meters under the ground. The intentions of the Germans were clear: the cars with explosives and aerial bombs were left near the bunker. The entrance to the den itself was open. True, the Nazis quickly came to their senses and threw the intruders away to Kalinovka. While the Soviet troops were trying to gain an advantage in this battle, the German bomb experts had already managed to prepare everything and blew up the Werewolf.

Thus, one of the most fortified and secret objects of Nazi Germany ended its existence. The explosion was so strong that giant blocks of concrete scattered around. So they still lie on the surface, forcing researchers and historians to torture themselves by conjectures about what is hidden under the ground. The entrance to the dungeon itself was safely bricked up. On images taken from space taken in 1990, cavities were recorded underground. There is a water well there that leads to the Bug. In order for the Führer to be always in the know, a telephone cable was laid right in the bunker. He stretched from the Werewolf itself to Kalinovka, from there to Berdichev, and from Berdichev to directly to Berlin.

Researchers, scientists, military, just curious - who just did not try to find the entrance to the "wolf lair". But what about underground utilities, when far from land structures are known for certain not all. More than six decades have passed since the explosion thundered, and not a single person could ever get inside the secret bunker. Many do not believe that an explosion, even such a force, could destroy the pinnacle of Nazi engineering. But if someone finally succeeds in getting into the Fuhrer’s underground apartments, the researcher can expect many “surprises” in the form of bombs, explosive or chemical depots weapons. The “werewolf”, even after his “death,” carefully guards his secret.