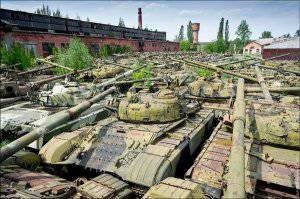 4 April it became known that Ukraine will very soon cease military-technical cooperation with Russia. The decision was taken de facto by the Prime Minister of Ukraine Arseniy Yatsenyuk. At the same time, the Ukrainian side expects to "redirect export flows to eastern markets." In connection with these questions, a natural question arises: what will this absurd and exclusively emotional decision lead to for both states?


For starters, you need to pay attention to history The military-technical cooperation of the Russian Federation and Ukraine, as well as its current state.

At the time of the collapse of the USSR, almost 3600 enterprises of the military-industrial complex were operating in Ukraine, and 139 more scientific organizations developing new types of weapons. The share of the military industrial complex in the Ukrainian industry was at least 35%. A third of the USSR space industry went to Ukraine. However, due to incompetent management and policy, by the 1997 year, such enterprises became smaller in 5, and by the 2010 year, there were only about 140 operating production.

In fact, the collapse of the military industrial complex of Ukraine can be explained by the reluctance to build normal cooperation with Russian enterprises, endless throwing from side to side - depending on the preferences of people in power. At the same time, almost all attempts at cooperation with Western companies ended in complete failure, for example, Ukraine participated in the project to create the Airbus A-400M military transport aircraft, but immediately after the transfer of drawings and documentation to Antonov State Enterprise was excluded from the project. At the same time, the plane turned out to be very similar to what Antonov offered. There are no two such examples, and not two.

At the same time, the Ukrainian authorities did everything to destroy cooperation with the Russian Federation. It was forbidden to use the training center for deck fighters of the Russian Navy NITKA (although now it is located in the Russian Crimea), Russia was always denied the sale of the unfinished 1164 cruiser “Ukraine” under normal conditions, which remained to rust. Joint projects of the Russian Federation and the Antonov State Enterprise were never brought to mind - although the same unique project of the AN-70 transporter could have a huge amount of orders all over the world. The restoration of the production of the An-124 Ruslan (the largest aircraft in the world) also did not happen, as a result of which the Russian Federation is already working to produce these cars itself, without any participation from the Ukrainian side in the person of Antonov. And this is just the tip of the iceberg.

As a result, in recent years, the Russian Federation has carried out systematic work to create its own production of those components that are produced by the enterprises of the military-industrial complex of Ukraine. In addition, almost no modern project uses the products of Ukrainian enterprises - this applies primarily to modern intercontinental ballistic missiles (Topol-M, Yars, a new railway missile system), anti-aircraft missile systems (the latest modifications of C-300 and C- 400) and aircraft.

Now consider what the gap between the military-technical cooperation will lead to for both sides. For the Russian Federation, this will be a rather painful blow, but fixable in the next few years. Most dependent on Ukrainian defense industry aviation equipment, and first of all it concerns helicopters. The main engine for the Mi-24 combat helicopter line and Mi-8 transporters is the TV3-117 engine (and its various modifications) produced only by the Zaporizhzhya company Motor Sich. Engines for Antonov transport aircraft are also produced by this company. It is worth noting that the Russian Federation will not be left without components for helicopters for long - TV3-117 will be produced by Klimov OJSC since 2015. Russia will be able to become completely independent of Motor Sich products no earlier than 2018.

In addition, the problem will be the maintenance of heavy liquid ICBM P-36М2 "Voevoda" (the most powerful ICBM in the world - carries up to 10 thermonuclear warheads), parts for which produces the legendary Yuzhnoye Design Bureau. It must be said that work is also being done in this direction - approximately in the 2018-2020 years, the Russian Strategic Missile Forces will begin to replace the legendary Voevode - the Sarmat ICBM. In the creation of the rocket, the Yuzhnoye design bureau does not take any part.

As for other products produced by the military industrial complex of Ukraine and necessary for the Russian Federation, then creating your own analogs will not take long - on average 1-2 of the year.

As you can see, Russia was partially ready for the breakdown of military-technical cooperation with Ukraine. The disadvantage is that in order to speed up work on some projects, you will have to invest quite large funds. But after a few years, Russia will have a full production cycle of almost any technology.

As for the consequences for Ukraine, they will be catastrophic, and the damage will be irreparable. It is enough to give only two numbers. 70% of the components of weapons produced in Ukraine are purchased in Russia. Without these supplies, Ukraine, in fact, will only be able to produce the T-84U Oplot tank in small-scale quantities. At the same time, more than 50% of Ukrainian military exports go to Russia.

What kind of "Eastern markets" in such a situation can be said is not quite clear. The country in an instant loses 50% of the sales market and the ability to produce serious equipment in principle. Of course, there will be some demand for Motor Sich engines from countries that operate helicopters manufactured by the USSRRFS, but these are poor numbers compared to contracts from Russia. The same applies to the sale of components and ammunition for other Soviet equipment.

From all of the above, we can conclude that the Ukrainian military industrial complex is waiting for a complete and final collapse. And so the decaying enterprises will remain idle and will soon be closed. And what is the saddest thing, the opportunity to come to their senses will not be either - the Ministry of Defense of the Russian Federation has already lost its confidence in the Ukrainian side and it is unlikely to restore the PTS. So the new de facto authorities in Kiev should think about their actions, casting aside emotions. Otherwise, thousands of people will soon be left without work. And against the background of a rise in gas prices, the remnants of the entire once-powerful industry in Eastern Ukraine will come to an end (it is worth noting that the largest military-industrial enterprises are also located in the South-East). Maybe this is the goal of the United States and its European partners in Ukraine? But how this is in the interests of the Ukrainian state itself is completely incomprehensible. Of course, this is the case if the given state still continues to exist, which today is not so obvious.