Russia to Europe: you need to keep an eye on your pigs ...

April 4 2014
264
The leadership of the Republic of Lithuania continues its war with windmills. Recently it became known that in a country that, as she herself believes, “built a democracy a long time ago,” an initiative was launched on the need to suspend the broadcast of such Russian TV channels as NTV-Mir and RTR-Planeta.


The NTV television channel was decided to separate from the Lithuanian audience because a documentary on Vilnius 1991 events of the year was shown on this channel several weeks ago. The Lithuanian leadership, which, apparently, belonged to the number of regular viewers of this channel (well, since I did not miss its documentaries), did not like the materials about what exactly happened in the capital of Lithuania during the collapse of the USSR.

It must be admitted that the Lithuanian authorities in general strongly developed a painful perception of the truth concerning the events mentioned. Literally less than six months ago, Channel One (in the local version - First Baltic) was “punished” for covering the same events - it was closed in Lithuania for three months and in addition fined. For what? Yes, just for the journalistic position. Just for the published testimonies of eyewitnesses who (the testimonies) do not fit in with the position of official Vilnius. In other words, the Lithuanian authorities had greatly offended by the truth about themselves, for which they chose the most democratic way - ways of imposing sanctions on the media ...

Apparently, the same fate now awaits RTR-Planet. But, as far as is known, in the last months the materials on the topic “painful” for Lithuanian politicians have not been published on RTR-Planet - there were no broadcasts, talk shows and documentaries about Vilnius-1991. Yes, it was not. But you need to be in the global trend. And according to this trend, TV channels in “democratic” states can now easily be taken off the air for any material that the local authorities did not like.

This time, the Lithuanian authorities attended to the material of Dmitry Kiselev, who reminded all the "partners" about the inevitability of a retaliatory strike from Russia "if anything happens." This reminder forced politicians to fidget in Vilnius too, and these politicians, who seemed to have barely dried their pants and skirts, immediately filed a lawsuit demanding to deprive the television channel of broadcasting rights in Lithuania for, quote: spreading information that incites discord. That is, in the countries of the victorious democracy, any information that says that “do not provoke us and do not get too tough” is perceived as inciting discord. Oh well…

And how then to be with the recent statements of the Lithuanian President Grybauskaite, who said (quotation in "Lithuanian courier"):

Publicity is the most effective response in Lithuania undergoing information bombardment.

Something, sorry? Publicity? And this says the lady, who covers the channels one by one. As one Internet meme says: patstal ...

And for an encore from the same Grybauskaite:

Dear fellow citizens, today, when in the cradle of our literature - the Kaliningrad region - they smash against Lithuania weapons, the letters of Kristijonas Donelaitis, kept in the museum in Chistye Prudy, come to life. An eternal order is alive in them that helped Lithuania survive.

Mrs. Grybauskaite, let it be known that you have obvious problems with hearing, for if someone is saber-rattling, it's your “partners” in NATO.

The peaceful buzz of the Allied fighters at 11 March celebrated the symbolic decade of NATO and European Union membership - a new segment in the life of our state in which freedom and security are indivisible. 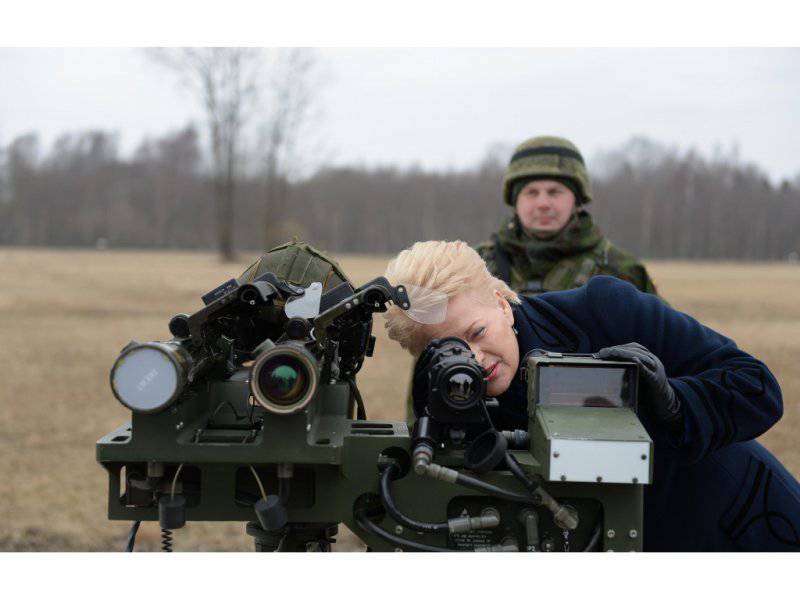 “Peaceful drone of fighters” is strong, isn't it? Like the cradle of our literature ...

Russia has always had asymmetrical methods for such attacks. Found this time. After official Vilnius embarked on the path of blatantly suppressing freedom of speech, the “old friend” of all Lithuanian authorities, the Rosselkhoznadzor, had to get involved. This department, whose one name makes any Baltic politician hoping for the “peaceful buzz of NATO fighters” to bite his nails, quickly found that Lithuanian meat products pose a potential threat to the Russian consumer ...

A spokesman for the Rosselkhoznadzor, Mr. Alekseenko, stated that from 7 in April of this year, Russia is imposing an embargo on the import of pork from Lithuania and Poland. The embargo is attributed to the fact that cases of African swine fever have been reported in the countries mentioned. At the same time, the same department calmly stated that the steps taken were in no way connected with well-known political events and are the usual method of protecting the Russian consumer from potentially dangerous products. Like, you are there in Vilnius and Warsaw, you can say anything, deny broadcasting of Russian channels, and we will be above it - just take and remember that among your pigs there is ASF ...

“Peaceful drone of fighters” - do not tell, it is better to keep an eye on the pigs. A subtle hint Rosselkhoznadzor that the same Grybauskaite time to go down from heaven to the sinful earth.

And, it should be noted that such a move after the very fact of the announcement of the embargo introduced by Russia from 7 on April brought the mentioned countries to a white heat. Let us give an example of the reaction of representatives, for example, of Poland (recall that Poland today declares active support for sanctions against Russia for our position on the Crimea). The reaction was distinguished by the representative of the Institute of International Affairs of Poland, Peter Kostsinski:

The embargo is typical actions of Russia to punish countries that act not in its interests, it says about its position on Ukraine. Russians have found a reason to ban the import of our pork, our meat. Unfortunately, we must be prepared for the fact that this will not be the only method of pressure. It may turn out that other Polish products are bad, harmful, and not useful for Russian buyers.
Quotation is given edition "Kiev Gazette".

And what to do, Petya ... We did not start it, you yourself know very well. There will be economic, political and informational sanctions in the current framework - on pork and dwell. Go ahead - you see, there are mutant worms in Polish apples, and in Lithuanian milk - the gene of “democratic rabies” ...

But the Rosselkhoznadzor unambiguously makes it clear that it has resources for “policy-free” prohibitions. Here is a quote from the representative office (transmits Interfax ):

It is possible that this dangerous disease continues to spread in the wild in the EU.

Translated into a retaliatory sanction, this means: as long as the ban acts on pork from Lithuania and Poland, but if the rest of Europe behaves rudely, the infected pigs “may also be on their own” and this means that the ban can touch and products from other countries. As they say, everything is in business - nothing superfluous - better watch your pigs, and you will have great democratic happiness ...