The territory of the hunt for "Satan." Collapse of cooperation with Russia threatens Ukraine with leakage of rocket technologies 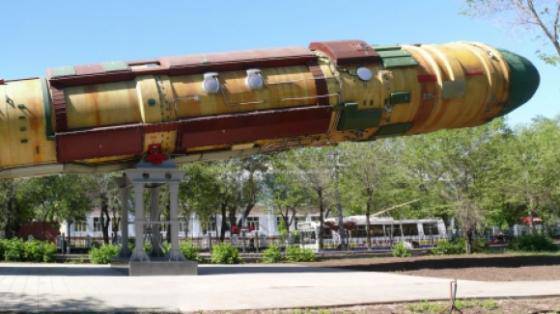 After President Vladimir Putin’s call to US President Barack Obama, the head of the State Department, John Kerry, deployed the plane to meet with Sergey Lavrov at the Russian embassy in Paris. The conversation behind closed doors lasted four hours. What could have caused such a sharp reaction of the American side? It is unlikely that it was only about stabilizing the situation in Ukraine ... It is possible that the US president was informed about the imminent violation by Kiev of the non-proliferation regime of rocket technologies. And this is a direct threat to US security.

The Republic of Ukraine inherited from the Soviet Union a powerful defense-industrial complex, including the production of rocket and space technology. The State Enterprise "Design Bureau" Yuzhnoye "named after M.K. Yangel in Dnepropetrovsk - a major developer of intercontinental ballistic missiles.

The RS-36M UTTH rocket designed here, according to the NATO code, SS-18 Satan (“Satan”), is still in service with the Strategic Missile Forces of Russia. Ukrainian specialists carry out architectural supervision, extending the resource of "Satan" - the most powerful ballistic missile in the world.

Its production has long been discontinued, but the design documentation is still located in Yuzhnoye Design Bureau. Like the documentation for another intercontinental missile - SS-24 (Scalpel), we have known as the Molodets RT-23 UTTH. This is a rocket for combat railway missile system (BZHRK). Under the START-2 Treaty, the complexes themselves were decommissioned and destroyed.

The entire defense industry of Ukraine is tied to Russian orders. But 29 in March, the acting director general of the Ukroboronprom concern, Yuriy Tereshchenko, announced the termination of deliveries weapons and military equipment to Russia. Again the. Prime Minister of Ukraine Arseniy Yatsenyuk told one of the TV channels that it is planned to re-equip the defense industry through cooperation with the West. In the meantime, enterprises will be modernized, "will have to use other people's samples." Although after the procurement of the need for their own weapons is likely to disappear.

Without Russian orders, Ukraine’s defense industry is doomed to a speedy bankruptcy. And then there will be foreign buyers, if not already appeared. First of all, these are Israel and China, especially interested in rocket technologies.

Israel overlooked the anti-Semitism of the ultra-right members of the provisional Kiev government and the militants of the Right Sector. Reacting painfully to the manifestations of neo-Nazism in Europe, the Israeli leadership did not pay attention to the beating in Kiev of the head of the Jewish organization Rabbi Cohen and the famous musician Jan Tabachnik, the burning of synagogues and anti-Semitic inscriptions. But she took on the treatment of "Heroes of Maidan." Apparently, there is a very big interest in Ukraine. More precisely, all to one really existing resource - rocket technologies.

Not seeking to spoil relations with Kiev usurpers and Beijing. China declined to assess the reunification of the Crimea with Russia. He, too, needs to maintain good relations with Kiev, whoever is in power. And the whole world knows that the Chinese do not spare money for sensitive technologies.

What can the bankruptcy of Ukrainian defense industry enterprises lead to? First, to privatization. All or parts of them will begin to sell. You can buy a plant or KB with archives. Secondly, the documents can be sold by the employees themselves, first of all the managers. Thirdly, you can sign tempting contracts with leading designers, take them out of the country and restore key documentation. And finally, fourthly, the Kiev interim leadership for the sake of a large soft loan of the PRC itself can bring the technology on a silver platter.

In this perspective, Barack Obama is definitely not up to the Crimea. He no longer requires the return of the peninsula to Ukraine. Get, say, Beijing "Satan" and BZHRK, the US leadership in the world will be a big question.

Ctrl Enter
Noticed oshЫbku Highlight text and press. Ctrl + Enter
We are
Poroshenko in the Design Bureau named after Yangel held up for the layout"Governor" may stole
Military Reviewin Yandex News
Military Reviewin Google News
102 comments
Information
Dear reader, to leave comments on the publication, you must sign in.