The West was afraid of Putin’s secret weapon

April 3 2014
297
In the West - from the USA to Europe - the hocks are shaking. It is even amazing. Not long ago, war in Libya, Iraq and Afghanistan, some in the United States declared victories over the enemies of democracy and the successful operations of the American and NATO troops. And most recently, someone called the American nation "exceptional" (translation option: "special"). The same someone was going to bullet "Tomahawk" in the direction of Syria. And before that, he also signed a piece of paper about a strategy, the priority of which should be the containment of China. Finally, this all-powerful winner of Libya has recently announced loudly about sanctions against Russia, which annexed the Crimea. Suddenly… 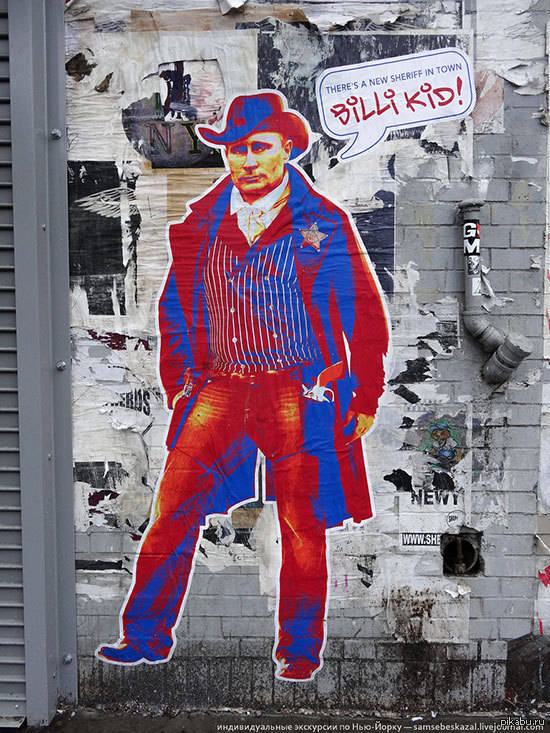 In the city, the new sheriff. The picture hangs on the wall of the house on 11-th Avenue of Manhattan

Western observers and analysts say not only about the weak character of the current "hegemon" B.H. Obama, but also about its weakness - economic and political. What can such a weakling do if the Russians enter into rage and begin to seize other pieces of “separatist” after the Crimea, and then move on to Transdniestria, the Baltic countries, finally, threaten Finland? .. Some are convinced that impetuous Putin is even occupying Belarus. USSR 2.0, period. Such is he, Putin. Finns, they say, even began to learn Russian urgently.

NATO Secretary General Anders Fogh Rasmussen made a lot of statements - in Brussels and in the United States. But no matter what he says, behind the words of the main NATO officer, one thing shines through: the same fear of Russia, which is widely shown by American journalists. Amazing! .. Everything changed overnight. They just threatened Syria, Iran, lectured China, frightened Russia with the EU’s Third Energy Package, spoke persistently about the European missile defense system, reiterated their strategic interest in Central Asia, NATO’s expansion to the east, handed out cookies at the Euromaidan in Kiev and promoted to political leaders not that Yatsenyuk, not that Klitschko, - when suddenly everything changed. Now the main topic was ordinary fear. He is in all newspapers, magazines, he is on Western TV.

Putin will bomb everyone, take over, occupy, lay a tribute. Everywhere there will be Russian “commandos” - in Vilnius, Helsinki and even on Wall Street. Not to mention Canada with Australia. Alaska is not even remembered as if it had become Russian territory itself.

The road of fear led the West to the commonplace realization that it was time to start a new arms race. The West cannot think of anything else, since it sees enemies everywhere. The West has no friends and cannot have it: either partners or opponents. Partners, however, are also opponents - competitors.

Peter Epps and Adrian Croft (Reuters, Yahoo News, translation source - Mixednews.ru) write that in Washington, London and Brussels, they conferred, and someone in charge made a conclusion: Russian troops invade the second neighboring state in the last six years. And so it's time to revise the strategy. In fact, the Crimea became the starting point for the possible suspension of the reduction of defense spending planned by the European Union. The United States, in turn, may increase its military presence in the countries of Central and Eastern Europe that are members of NATO. At the NATO summit scheduled for September, they will most likely talk about a return to a strategy to contain Moscow.

But where is the money, Zin?

The authors point out that since 2008, EU countries have cut military budgets by about 15%. But Russia has increased its military budget by 30%. And Putin feels more confident, invading here and there.

Since the days of the Cold War, the US military presence in Europe has decreased by several times, the material notes. The number of US military personnel is about 80000 people there, and including 14 thousands of civilian personnel. In the last decades of the USSR, this number exceeded 300 thousands of people.

British Foreign Secretary William Hague is convinced that one of the main topics at the coming NATO summit will be the abolition of reductions in military spending. But it seems to be bravado. “Speaking frankly, no one has a great desire to increase military budgets,” said Judy Dempsey, a staff member at the European branch of the Carnegie Foundation. She believes that nothing says about the refusal of Britain to further reduce military spending.

By the way, another question of the upcoming summit is about nuclear weapons. The atomic "mushroom" in the West is very afraid. In addition, as noted in the material, one of the leading central pro-Kremlin television channel allowed itself to declare: "Russia is the only country in the world that can turn the United States into radioactive ashes."

Military officials in the West are at a loss today. Both they and analysts admit, according to the article, that NATO can do little to stop Moscow in the former Soviet republics that are not members of the Alliance.

Yes, apparently, it would be difficult to attribute these republics to the north of the Atlantic even for the quirky two-standard politicians who managed to forget the “Kosovo precedent” in the case of a referendum in the Crimea.

The article says that the “Baltic countries can become a potential hot spot.”

But here they are - members of NATO. And all members of the organization are obliged to come to their aid in case of aggression.

Everything, therefore, will become a wall when the tyrant Putin sets out to oppress the Baltic peoples. But something tells us that the Balts in such a fantastic case would prefer to voluntarily enter the USSR 2.0: after all, the NATO members became famous for not seeing where the bombs were being dropped, and in small territories like Lithuania and Latvia it’s generally difficult to figure out the coordinates. And the first "signals" for voluntary surrender are already available.

A few days ago, Agris Timushka, a representative of the State Language Center of Latvia, said that the Latvian authorities could revise the law on the state language. In an interview with LNT Timushka сказалthat Latvia does not expect a radical change in the language law, but changes in some of its positions are possible. It was also referred to as “UN pressure”. But we understand what pressure we are talking about ...

Renowned for his Third World War scenarios, analyst Dave Hodges posted material on his 19 March website under the heading “Putin can win the Third World without a single shot” (the translation source is Mixednews.ru).

Hodges is confident that Putin can cut Ukraine as easily as a hot butter knife. NATO can hardly counterbalance the actions of Russia - well, except to use nuclear weapons.

XXI century - the age of China? Do not rush to such statements, says the analyst. "When the smoke of the current crisis dissipates, it may turn out that Russia is becoming the dominant force on the planet."

Judge for yourself: America was defeated in Ukraine. Europe failed when it tried to convince Ukraine to join the EU. And what about the IMF, the World Bank, NATO, the Obama administration and the petrodollar? And they all will soon end. Comrade Putin will deal a crushing blow to them.

He will use the Kremlin's "secret weapon." It is such a force that the West will have nothing to answer. Moreover, according to the author, Putin has several types of secret weapons.

Weapon first. Raw material Germany gets 36% gas from Russia. Italy receives 27%, France - 23%. A significant part of Russian oil and gas goes through the territory of Ukraine. Once it falls into the hands of the Kremlin, Putin will have control over most of the energy resources consumed by Europe, the material says. So much for Putin’s “energy trump card”.

From now on, the Kremlin’s owner will be able to demand anything in exchange for gas supplies to Europeans. He may stop accepting dollars for gas. The dollar, and with it the American economy, will collapse.

And what about NATO? France, Germany, Italy — will they go to war against Putin, bearing in mind “loyalty to the military alliance”? Oh, hardly. Their peoples will prefer economic stability. This is where the end of the North Atlantic Alliance will come.

Weapon the second. Putin's challenge to the Fed will push the world to search for the best medium of exchange. The situation is quite able to use, for example, Saudi Arabia. If Obama does nothing, then in 2014, the petrodollar will end. America is waiting for hyperinflation and the nightmare of crisis.

What can Obama do? He has a rather modest choice. It seems, the author believes, Obama will blame Syria for something and invade there, and then arrange an intervention in Iran. Thereby, the refusal to use the dollar in the Middle East will be delayed, that is, Obama will slow down the death of the petrodollar.

Weapon third. And what about Assad? Will he become a modern Vo Nguyen Zyap who knocked the Americans out of Vietnam? In addition, there is information that Putin supplies Assad with first-class military equipment and weapons. It looks like Putin will again break Obama's plans!

Hodges said a few words about the Chinese. About them can not be said. Who will the PLA support - Russia or still America?

China is the largest holder of US Treasury bonds, and the future of its economy depends on keeping the dollar in a viable state. Meanwhile, China also participated in the undermining of the petrodollar: for example, it bought Iranian oil for gold. We have yet to analyze, says the analyst, whose side China will take.

In short, there is no definite answer.

In the case of the outbreak of the Third World War (and this is America’s way out of a difficult situation), the world does not expect anything good. The only winners in the war will be financial tycoons, Hodges believes.

To summarize The will of the people in the Crimea in the West is still declared the “Russian invasion”, the second after the short war with the Georgians of 2008. We should respond to the “invasion” with something, but Washington, London and Brussels do not know what to do. The only way out that they came up with is to increase the arms race. But the trouble is: they have no money!

There is an opinion that Putin is about to occupy Lithuania, Latvia and Estonia. And these states are members of NATO. Apparently, here analysts see the starting point for the Third World War.

But what does NATO oppose to Russia's actions? There’s nothing today for the impoverished alliance against the armed Russians, except nuclear weapons.

And then there's the “secret weapon” of Comrade Putin. Germany, Italy, France - all are heated by Russian gas. This is the first. Second, Putin can challenge the Fed and ruin the petrodollar. America is waiting for a nightmare. France, Germany, Italy will not fight for the dollar, they will prefer the stability and supply of Russian gas. Here and NATO is over. Third, Putin will not allow Obama to conduct a quick and victorious war in the Middle East - Russia will cover Syria.

If we recall that Obama almost completely failed both US foreign and domestic policy and earned a reputation as the worst president in the US stories (even worse than Bush Junior), the reason for the gloomy mood of Western analysts becomes clear. White House would never save a dollar ...

Observed and commented on Oleg Chuvakin
- especially for topwar.ru
Ctrl Enter
Noticed oshЫbku Highlight text and press. Ctrl + Enter
We are
Results of the week. “I saw a lot of psychos, but this place is a reserve”US National Security Interests and American Values: Primary and Secondary
Military Reviewin Yandex News
Military Reviewin Google News
297 comments
Information
Dear reader, to leave comments on the publication, you must sign in.