Kiev: household shooting in the framework of the election campaign 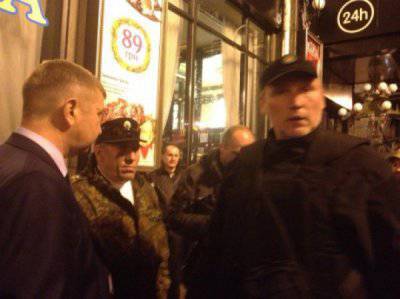 Dmitry Yarosh, a candidate for the presidency of Ukraine, clearly began his election campaign. In the center of Kiev, near the chain restaurant with the eloquent name “Mafia”, the candidate’s confidant, drunk in the trash, made five well-aimed shots. As a result, it became clear who is the first deputy head of the Kyiv City State Administration. This is a certain Dubas Bogdan Iosifovich. He received a minor wound: the bullet fired by the Pravosek passed through, without hitting any vital organs.


And in total, three people were injured in the framework of the election campaign of Dmitry Yarosh. Alexander Levkush, a fighter of the third hundred Maidan, received three bullet wounds: his lungs were broken and a piece of lead was stuck in his stomach. The condition is critical. Another shin pierced. As you can see, the incident is absolutely trifling, purely everyday, as the PS press service claims. One hero of the Maidan went to a restaurant for pizza. Fortunately, the Right Sector base was located nearby, located in the cozy Dnipro Hotel, which has been rising on the European Square since Soviet times. He went out to smoke and met another hero of the Maidan. True, from “self-defense” Andrei Parubiy, who now works as a secretary of the Security Council in sweat of his face, periodically disrupting Vladimir Putin’s cunning, but bitch ,’s extremely aggressive plans. The meeting of two war veterans led to a discussion of burning issues: "Who are you, blah, but I stood on the second barricade, burned cops!". In response: “You fucking damn, I’ve been on the Maidan since childhood, and the special forces began to wet from the cradle!” Later, news agencies reported that the conflict broke out either because of the booze that the military "pravosek" wanted to bring to the Maidan to his thirsty comrades, or because of the dismantling of rare tents, which are large historical value for future generations of Ukrainians. At some point in the conversation, the “self-defense man” decided to freshen up his twin sister with a jet of well-smelling pepper gas. The opponent decided to continue the dialogue by pulling the barrel and shooting the first deputy head of the Kyiv City State Administration accidentally passing by the first shot. Then he nevertheless concentrated and did not fail presidential candidate Dmitry Yarosh: five shots - five hits! So shoots "Right Sector"!

Further developments were completely peaceful and European. The shooter quickly, but with dignity, retired to the toilet of the restaurant, where he blocked the front door, thus depriving visitors of the benefits of civilization. The “self-defense” workers of the Maidan, who came to the rescue, followed him and politely tried to break the door down because the toilet that was not working was a gross violation of sanitary and hygienic standards. It should be noted that Petr Poroshenko promised the entry of Ukraine into the EU already in 2025 year. There is not much time left, so the country should be cleaned up today. And then a fighter with a barrel in the toilet. It's not European-like somehow. But the well-aimed shooter, who, according to the hero of the revolution, now Minister of the Interior Arsen Avakov, was in a state of acute alcoholic intoxication, managed to get in touch with other proxies of the presidential candidate. The trustees arrived at the scene of the domestic incident "heavily armed." What does this mean, I honestly do not know. It’s just that Arsen constantly updates his blog, where all interested people get the necessary information from and where they also write kamenty, from which it follows that they (persons) have close relations with both the Ministry of Internal Affairs and personally with Avakov. What does this mean, I again do not understand, but, bitch, I warmly welcome, because we are going to Europe and there it is so accepted.

The "heavily armed" members of the Right Sector legal party, bending under the weight of various small arms, arrived at the restaurant and rescued their twin brother who was already bored in the toilet. They formed a living corridor. Well, this is the way to do it when it comes to trivial bytovuha with shooting in the center of the capital. It’s just that some heroes of the revolution do not quite understand other heroes of the revolution, and on this basis there are gunfights. Yes, this is a common thing. Anyway, only Maidan, “self-defense”, “Pravoseki” and other armed people hang out in the center. Kievans are trying to bypass this zone side, because maydanovtsy have not yet had time to harvest, go hungry, eat pizza, the money for which give good owners of outlets after the demonstration of some items of traditional equipment representatives "euromaidan."

Unfortunately, the completely peaceful development of the conflict was interrupted by the aforementioned Minister of the Interior, who drove the policemen who had been involved in the dispersal of the February peaceful rally to the Dnipro hotel. Militiamen, who later turned out to be vile accomplices of the Yanukovych regime, surrounded the hotel, beat them in shields and shouted “Storm! Storm!".


Such defiant behavior angered centurions "self-defense" Maidan, whose representative shot accurate "pravosek" three shots in the chest. They learned there a police colonel who personally participated in the mockery of the protesters. It began to clarify the relationship, which at any time threatened to go into a typical household conflict with the use of small rifle weapons. Meanwhile, about the 200 Pravoseks, who were stationed at a hotel in a European-style hotel, found that the liquor stocks in the mini-bars had run out. The situation was becoming threatening. They began to load bags, filled with something heavy and tinkling, into a truck. But they did not have time, because the hotel was cordoned off by the police, which, in turn, were cordoned off by representatives of the “self-defense”. Absolutely normal situation for Kiev is a city of high European culture. And then Yulia Tymoshenko arrived, who addressed with fiery and sensitive speech to the defenders of the Dnipro hotel. Many cried from her heartfelt words. Some particularly sensitive natures were vomiting. Relying on a crutch in which the “Byutov” craftsmen built atomic weapons, Yulia Vladimirovna outlined the main points of her election campaign, from which it followed that Putin had organized a shooting in the center of Kiev, and Poroshenko was not a good person. After the speech of Tymoshenko, which lasted four hours, the stunned domestic drama participants plunged into buses, helpfully fitted by the Ministry of Internal Affairs, and left Dmitry Yarosh's election headquarters. Avakov immediately wrote in his “Twitter” that the militants had left without weapons, because no one had shot at the police. Only one young Pravosek has a PCA jammed. And they went to the country pioneer camp, where they were asked to either become a Pioneer leader or sign a contract for service in the elite ranks of the National Guard. However, the faithful sons of the Fatherland with contempt rejected attempts by cops to substitute the heroes of the revolution. They said that they wanted to return back to Kiev, because without them the commercials would completely dissolve and stop paying tribute to the revolutionary obshchak.

I stress once again: there is no political motive in this purely domestic crime. As in the upcoming storming of the Verkhovna Rada demanding the resignation of Arsen Avakov, who had treacherously intervened in friendly clashes between Euromaidan's twin cities. Today, the PS plans to either burn or blow up parliament if the demand for Avakov’s resignation is not met. Perhaps this is just April Fool's joke. After all, Miller congratulated Ukraine in the morning with a new gas price: only 385 bucks with a half a thousand for a thousand cubic meters. Oh, those Kremlin pranksters, damned invaders. They do not understand that peaceful domestic conflicts in Kiev indicate the readiness of all residents of the country to rally around the Right Sector in investigating the circumstances of the so-called suicide of the people's hero of Ukraine (posthumously awarded the title) Alexander Muzychko. Therefore, the election campaign in Ukraine is going tolerantly and purely in a democratic manner. Unfortunately, the European friends of Ukraine angrily slander, calling "PS" and "self-defense" purely fagorous words - "paramilitary formations". They, bastards, call for surrender weapons, obtained in fierce battles with the criminal regime. They recalled the freaks about the February 21 agreement, which provides for the disarmament of all participants in street fighting. Well, aren't they scoundrels? Therefore, it is not surprising that on social networks “Svobodovets” and “pravoseki” urge all those who are not indifferent to come and crumble into the cabbage the representatives of the second criminal regime, who within a month established dictatorship and totalitarianism.