Africa is convinced: Russia is returning not only to the Crimea 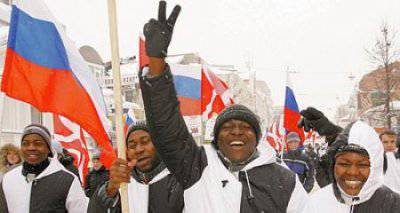 A recent report by Mikhail Margelov, Chairman of the Committee on International Affairs of the Council of the Federation, Special Representative of the Russian President for Cooperation with African Countries that a number of Black Continent countries actually support Russia's position on the Crimea, was ignored in Western media. With the exception of remarks that "Moscow gives the desired for reality." But the new Ukrainian leadership, it seems, made nervous.


Probably, it is not by chance that he was among the first victims of the purge in the Ukrainian Foreign Ministry, initiated by the Acting President Alexander Turchinov, were personnel diplomats who worked in Africa. Ambassador to South Africa (concurrently also in Namibia, Zambia and Zimbabwe) Valery Grebenyuk, Ambassador to Portugal and Angola Alexander Nikonenko, head of the diplomatic mission in Egypt Yevgeny Kirilenko.

The displacement of the latter looks particularly illogical. It was on the Egyptian direction that considerable success was achieved: a couple of years ago, for example, it was reported that deliveries of Ukrainian grain to Egypt in just one year increased almost 25 times, then negotiations began on the export of Ukrainian agricultural machinery.

We note that Yevgeny Kirilenko, a native of the Donetsk region, was appointed by Yanukovych as ambassador to Cairo. So, in Kiev, apparently, "political expediency" once again takes precedence over elementary pragmatism.

Transactions and unions - instead of sanctions

In Egypt, representatives of the military authorities prefer not to extend to the topic of the Ukrainian crisis and the situation in Crimea. Instead, as the Cairo newspaper Daily News Egypt emphasizes, Egyptian generals want to "maximize" the benefits of the current confrontation between the West and Russia. While Western leaders are announcing different levels of sanctions against our country, ARE Interior Minister Mohammed Ibrahim said his agency is considering a deal to buy large quantities of weapons in Russia to fight the terrorist underground. In a conversation with reporters, the minister recalled that the US and the EU themselves “tried to strangle” weapons Egyptian imports after the removal of Islamist President Mohammed Mursi on July 3 last year.

But the anti-Western front of the Egyptian leadership is not limited to this. On the eve of his visit to Moscow, ARE Minister of Trade and Industry Munir Fakhri Abdel-Nur announced that Cairo is considering the possibility of negotiations on the creation of a free trade zone with the Customs Union, which includes Russia, Belarus and Kazakhstan. Abdel-Nur acts consistently. Earlier, he shared with the press his impressions of the protracted negotiations on investment cooperation with France, complaining that French officials "every time show a desire to make sure that Egypt is on the right path and that it is not threatened by a dictatorship." Extremely familiar style, isn't it?

Recall that the only Arab country that can afford to express directly the attitude to the events in Ukraine and in the Crimea is, of course, Syria. Immediately after the Crimean referendum, Syrian President Bashar Assad sent a telegram to the Russian leader expressing solidarity. "Putin," he said, "remains the guarantor of the creation of a balanced world system based on respect for the sovereignty of states and the right of peoples to self-determination."

On self-determination and morality

As for the Black African states that Mikhail Margelov spoke about, Russian diplomacy here, in fact, has a fairly wide field for maneuver. Margelov attended a meeting of the Pan-African Parliament (the continental equivalent of the European Parliament), at which African deputies discussed the situation in Crimea. The ex-president of Ghana, Jerry Rawlings, to the applause of the audience, supported the Russian position in relation to the peninsula. This point of view in a personal conversation with the Russian senator was confirmed by the President of Uganda, Yoweri Museveni. “The deputies of parliament after Vladimir Putin’s speech on the sidelines said that the unipolar world was over, the people’s will expressed in the referendum was legitimate, and nobody canceled the right to self-determination,” said Margelov.

That, in general, is not surprising: the last 20 years of representatives of many African countries, especially those that once held a socialist orientation and have long-standing experience of cooperation with the USSR, reminded Moscow of the desire to at least restore the former cooperation to some extent. The American dictates and the neo-colonialist attempts of Washington’s European allies, in fact, weary everyone.

67-year-old doctor at the University of Lincoln School of Diplomacy and Development Jerry Rawlings (President of Ghana in 1979 and 1981 – 2001) has long departed from participation in public affairs and prefers to act as the patriarch of African politics. Moreover, by the level of development, the Republic of Ghana can be added to the list of fairly successful countries of the Black Continent. And Rawlings was not afraid to give a speech with frank criticism of the United States, emphasizing that "double standards are the favorite tactics of leaders who do not recognize morality in politics."

The current president of Uganda, Yoweri Museveni, has a different situation. He, too, is not averse to criticizing Washington. But only on the sidelines. Two years ago, by the way, Museveni came to Moscow and agreed on joint projects in various fields: from the modernization of cotton processing to multi-unit construction in the Ugandan capital of Kampala and traditional exploration and mining of gold, tin and chromium.

Regarding the situation around Crimea, one of the country's leading newspapers, The Monitor, spoke extensively about the Ugandan president, quoting the article by former US Secretary of State Henry Kissinger in the Washington Post, in which he criticized the current US policy toward Ukraine and Russia.

The newspaper urged to pay special attention to the statements of the former Secretary of State that “Ukraine for Russia can never become just a foreign country,” and “Russian история It begins with what was called Kievan Rus. " After that, President Museveni did not fail to notice, speaking on one of the Ugandan TV channels, which Kissinger always considered to be "a symbol of detente for international tensions."

The Pan-African Parliament sits in South Africa, a country that is Russia's BRICS partner. South Africa has repeatedly been ostracized by the United States for its solidarity with Russia in the Syrian issue. Crimea is another matter. As in the case of Uganda, public sentiment about the fate of the peninsula is expressed mainly through the media, and not in the official speeches of politicians.

The country's influential business newspaper, Business Standard, notes that "the growth of Russophobia in the political elite of the United States prevents a normal approach to long-term relations with Moscow." In another article, talking about a telephone conversation between Vladimir Putin and PRC Chairman Xi Jinping, the columnist concludes: “It’s hard not to agree with Chinese criticism of the West. Leading US and European politicians have preserved the mentality of the Cold War and, in fact, returned to the old rhetoric as soon as the rivalry for influence in Ukraine intensified. ”

They carefully monitor the situation in neighboring Angola. Here, in relation to Ukraine, there are some nuances that developed during the years of the long civil war, which ended only in the 2002 year, that is, 11 years after the collapse of the USSR. One of the heroes of this war, the Angolan general Roberto Leal Ramos Monteiro (formerly ambassador to Russia and, concurrently, to Ukraine, and then the Minister of the Interior) told the author of these lines that UNITA militants did not accidentally use Soviet weapons. In the 1990 years, this equipment was sold to them by Ukraine. “The rebels wanted to know how Soviet weapons function. After all, such a stream of military equipment from the West, as during the years of the Cold War, was no longer there. This also explained the appearance of Ukrainian military specialists in the territories controlled by UNITA, ”the general emphasized.

True, Monteiro made a reservation at once that before the collapse of the USSR, there were much more Ukrainians among the veterans of the Angolan War who helped the legitimate government than among the “wild geese”. But then the situation changed completely. And although the Ukrainian military experts did not directly participate in the battles and returned home after the end of the war, the residue from their activities remained. “These are the wounds of the civil war, moreover inflicted with the help of those foreigners whom we used to consider to be friends,” stated the Angolan general.

Be that as it may, Luanda’s television closely watched the events in Ukraine and during the Orange Revolution a decade ago, and now. In both cases, the national daily newspaper Jornal de Angola urged not to evaluate the events through the prism of ideological dogma, recalling that the peculiarity of the situation was that in the past Russia and Ukraine were parts of one powerful country - the Soviet Union, which owned "such a pearl as Crimea" . “And thanks to the USSR, we defended our freedom,” said one of the editorial columns of the newspaper.