April 1 2014
53
The latest portion of materials from Edward Snowden publishes the Western press. This time, the German journal refers to the secret documents of the so-called “Snowden file” "Der Spiegel". The publication reports that in 2009, the US National Security Agency as a person to whom "you should pay special attention" indicated the then Ukrainian Prime Minister Yulia Tymoshenko.


Of course, there was no sensation that the NSA, together with the British “partners,” had deployed cyber-surveillance of Tymoshenko at one time, because if you believe the same Snowden file, then from the above-mentioned 2009, a rare high-ranking state official in this or in other countries of the world, American and British special services avoided (Angela Merkel, Dmitry Medvedev, Alexander Lukashenko, Dilma Rouzeff and many other ladies and gentlemen - representatives of the highest echelons of power in certain countries). But what is interesting is that it was in the process of this cyber-shadowing that the “gas princess” not only lost her cushy little place in the chair of the Ukrainian Cabinet of Ministers, but also imprisoned her. It would seem a simple coincidence, but such coincidences are hardly possible with the current intricacies of geopolitical interests. 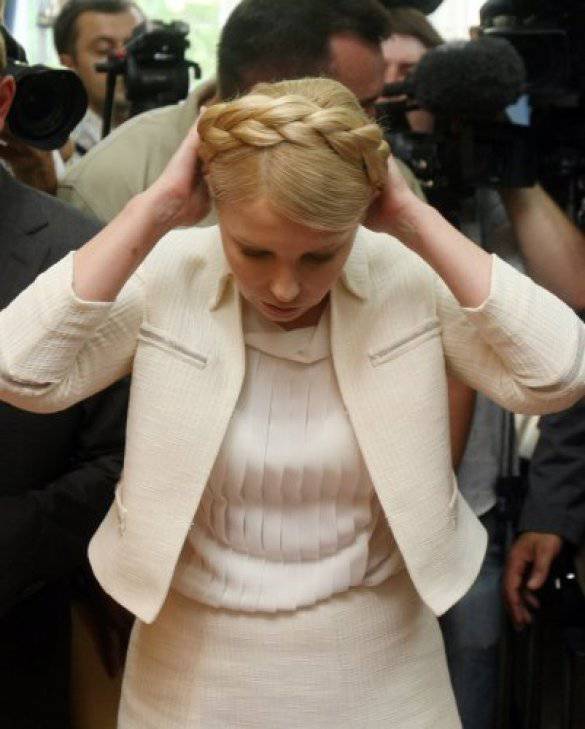 Recall that the criminal case against Yulia Tymoshenko was initiated by the Prosecutor General of Ukraine about two months after the government of Mrs. Tymoshenko’s Verkhovna Rada of Ukraine dismissed the government in March 2010. At first, the government of Yulia Tymoshenko after her defeat in the presidential election was left by representatives of the coalition from the Bloc of Lytvyn, together with deputies from Our Ukraine-People’s Self-Defense. Then Tymoshenko was waiting for a “control shot” during a vote in the Rada on the expression of distrust of the government - even the representatives of her own bloc, the Yulia Tymoshenko Bloc, spoke out against the Cabinet of Ministers headed by a woman with a scythe. Immediately, seven “byutovtsy” unexpectedly for Yulia voted for the resignation of the Cabinet, and this alone became the impetus for the “gas princess” to start taking the first steps “on the stage”. A year later, Mrs. Tymoshenko, not burdened with power, was arrested on charges of abuse of office when entering into gas contracts and on a number of other charges related to her work in various positions in the political and economic field of Ukraine.

An episode looks very interesting in this situation, which suggests that an active audit of the activities of the cabinet of ministers immediately after Tymoshenko's departure was carried out, among other things, by American companies. In particular, US firms such as Akin Gump Strauss Hauer & Feld Mark (one of the leading US law firms) and Trout Cacheris, PLLC were engaged in audits. The use of these companies is confirmed by the presence of the Resolution of the Cabinet of Ministers of Ukraine No. 334 dated 5.05.2010, as well as a number of media and Internet resources - for example, "Glavcom", UNIAN).

To understand what the scale of these firms, we can give a couple of examples. Trout Cacheris, for example, in the United States is known for its close business partner at one time was investigating the so-called Watergate scandal. As you know, Watergate has led to big political problems for President Nixon. The same partner of the company led President Clinton to no less problems, investigating the Clinton-Lewinsky sex scandal that had been sensational in its time and even more scandal in connection with the false testimony of the president under oath.

In general, as you can see, companies are far from ordinary. The result of their work was the data on the amount of damage that the government of Mrs. Tymoshenko brought to the Ukrainian budget. The amount originally announced was over 5 billion dollars. Then the amount has undergone a downward correction. The final version of the voiced damage is about half a billion US dollars. As they say, a woman with a scythe was, for what to sit ... And this is not counting other "issues" from the Prosecutor General's Office.

But now the matter is not even in prosecutorial matters, but in the way Yulia Tymoshenko was methodically poured by American “partners”. More precisely, Yulia was poured by people whom the American “partners” did not even think of tugging, even on the contrary — they encouraged, with the help of well-drafted financial and other audits, auditing and law firms from the United States (such companies, which, if they take up the matter, bring it to end).

Now Ms. Tymoshenko is free. At liberty thanks to the actions of the illegitimate Kiev authorities. It would seem that here it is - a direct road to the presidential Olympus for Yulia Vladimirovna. But something suggests that this time Mrs. Tymoshenko’s presidential ambitions will remain unfulfilled. And the reason for this is not so much that, by hooting, she was met by the Maidan, but because it is unlikely that American and other Western “partners” are betting on a woman with a scythe (or already without a scythe). Not for that, the American companies mentioned above counted the losses inflicted to the Ukrainian state treasury by Prime Minister Yulia Tymoshenko in order to take and support Tymoshenko in her desire to please the presidency. First of all, such support precisely discredits the United States themselves - after all, it turns out that “from there” they are ready to support already overt embezzled embezzlers in Kiev. Secondly, apparently, Yulia Tymoshenko did not bet on Washington from the very beginning (from the moment of unwinding the Maidan).

Indirectly, the idea of ​​Yulia Tymoshenko’s “discharge” at the elections is confirmed at least by the fact that in her own column in the German edition "Bild" Vitali Klitschko suddenly called on the “gas princess” to withdraw the candidate in favor of Petro Poroshenko.

Vitaliy Klichko:
We need a single presidential candidate from all democratic parties, so that the country is not divided further. Petro Poroshenko currently has the greatest support in polls - and that is why I support him. Yulia Tymoshenko will do the right thing if she also takes responsibility and supports Poroshenko.

It would seem, well, what a Klitschko column is - so ... a place to express your personal opinion. But this column is in the Western edition, and in the edition of the country from which Tymoshenko had just returned “after treatment”. The fact that the call for a woman with a scythe appeared in the Western press, and not in the Ukrainian one, says that the West does not bet on Tymoshenko, and in her release from the “torture chambers” he clearly does not see a reason for a storm of applause that passes in the need to support Julia in the elections. That is, an option emerges in which the West, through Klitschko, announces to Yulia Vladimirovna that it would be better to establish a quiet life without presidential ambitions, until the results of the audit of the American companies discussed above emerged again. And with the reasoning on the topic “to shoot Russians from atomic weapons"Tymoshenko can completely merge irrevocably, so as not to compromise the macrodemocracy and its sponsors ...

Ctrl Enter
Noticed oshЫbku Highlight text and press. Ctrl + Enter
We are
Results of the week. "I'm not guilty! He came himself! ”Lukashenko gave a detailed interview to Russia Today journalists
Military Reviewin Yandex News
Military Reviewin Google News
53 comments
Information
Dear reader, to leave comments on the publication, you must to register.