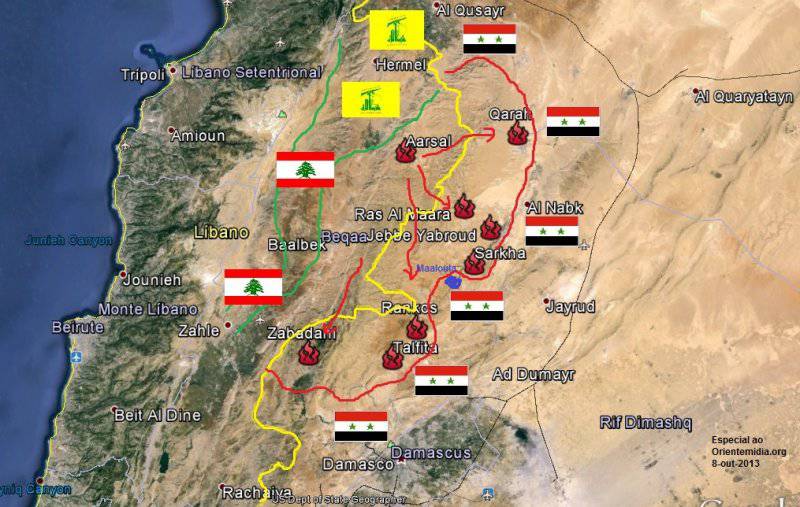 In recent days, the Syrian issue has again become acute. Hot discussions in American political circles, emotional speeches by participants in the Arab League Conference in Kuwait on March 25-26 are not a discussion of plans for a peaceful settlement of the Syrian conflict; This is the debate about which method of taking Damascus and overthrowing President Al-Assad will be most effective.

The situation in Syria for the armed opposition, gangs of international jihad and external sponsors of this whole “like-minded terrarium” has reached a dead end. Bashar Asad and his team were able to work out an effective tactic of confronting the rebels and jihadist interventions, which consists of grinding the opposition and jihadists on strategically important directions and attacking logistic hubs.

In fact, this is the tactic of the final stage of the Afghan campaign of the USSR, when not the establishment of control over every inch of land, but the reduction of the capabilities of the enemy to the level of an "acceptable terrorist threat" comes to the fore. Success is achieved by Damascus at the expense of superiority of government forces, Hezbollah units and Shiite volunteer brigades in combat training, support for heavy artillery troops and air superiority.

Serious victories of the Syrian army in the capture of Yabrud and the restoration of control over the Kalamonsky gorge do not mean the end of the war or even a strategic change in it, but they impede the anti-government forces, firstly, access to the Lebanese ports, and secondly, access to the Sunni enclave of Arsal in the Lebanese Bekaa Valley, which the rebels have turned into their base of support. The Lebanese Shiites and government troops now have a great opportunity to clear Arsal, which became the efforts of jihadists not only their rear base, but also a center for the production of drugs, smuggling weapons and people.

The military successes of Damascus really turned into a dead end for his opponents, as emotionally said at the summit in Kuwait, the Crown Prince of Saudi Arabia, Sheikh Salman bin Abdulaziz, who pathetically accused the whole world of “betraying the opposition” and turning it into “easy prey for a bloodthirsty dictator.” A way out of the impasse in Washington and Riyadh is seen in changing the military balance in favor of the rebels. The call to arm them with heavy weapons in order to negate the domination of government forces in the air and the superiority of the army in firepower, in fact, reduced the performance of the crown prince.

The political map of the Middle East is rapidly changing, and the question of Saudi hegemony in the region is not even a form of meeting the ambitions of the dynasty, but the problem of its survival. Having inclined partners, and not all of them, to the “punishment” of Qatar and thus securing its leadership in the Cooperation Council for the Arab States of the Persian Gulf (CCG), Riyadh needs serious and speedy foreign policy success. Taking Damascus for him - the most valuable prize, which will strengthen the position of the Saudis in the Arab world, and will allow to start to implement other plans - the creation of the Jordanian-Palestinian federation and the formation of the anti-Shiite League from the Arabian Peninsula to Pakistan.

This categorical Saudis in a dialogue with Obama and is due. The proposals that Washington makes to Riyadh - PersopRO, the rearmament program, supervision in the affairs of Palestine and the Maghreb, with all their financial attractiveness and political dividends, are not very happy with the royal dynasty, because they are defensive in nature and do not answer the main question for the Saudis: “How to stop the growing influence of Iran and the Shiite Awakening? ”

The aggressiveness of the Saudis, when a “small victorious war” is required for the survival of the dynasty, puts Obama in a very interesting position. On the one hand, almost 46 percent of Syrian chemical arsenals have now been eliminated, which makes the “Iraqi scenario” against Damascus impossible. Public opinion in the United States to the direct intervention in Syria is extremely negative; This is important before the November congressional elections, and the presidential race is just around the corner. On the other hand, the United States has invested about 2 billion dollars in the overthrow of Assad. The American neocons, who fiercely criticized Obama for indecision in the Syrian issue, after Crimea lost all restraint. Blackmail and the threat of sanctions against Russia did not work. Now, Syria is perceived by the Americans as a field of “revenge for the Crimea”, and the seizure of Damascus as an opportunity to deprive Moscow of all positions in the Middle East. The Saudi lobby, behind which stand the interests of the military-industrial complex and transnational corporations, is blackmailing the White House with the threat of a critical cooling of relations between Washington and the Saudi kingdom. And if Obama still somehow endures this blackmail, then for John Kerry with his presidential ambitions, these threats create a lot of problems for the future.

The United States is drawn into Syria much more than the White House would like. In addition to the two billion dollars in the export of democracy to Syria, there are four more directions of the undeclared war against Damascus, which Washington is waging under the guise of peaceful rhetoric.

First, the supply of small arms to anti-government forces with the knowledge of the US Congress.

Secondly, the financing of the rebels (total payments from January amounted to about 3 million dollars), their intensive training. Since the end of 2012, CIA operatives and instructors of US special operations forces have been training insurgents in camps in Jordan and Turkey. The training course includes the handling of heavy weapons, in particular with anti-tank complexes and MANPADS. These training camps produce up to several hundred insurgents per month, some of whom then conduct “instructor work” among militants in Syria.

Thirdly, the supply of “non-lethal assistance”, the volume of which is increasing (today it costs almost 80 million dollars monthly) and changes in quality. If at the beginning of 2013, “non-lethal assistance” mainly consisted of medicines and food rations, today its main part consists of communications equipment, night vision devices, engineering equipment and vehicles.

Fourthly, Washington's favorite tool for exporting democracy as sanctions. At present, the United States and its partners in the anti-Syrian coalition froze all foreign assets of Damascus, any investments in the supply of any equipment and any transactions with oil products of Syrian origin are prohibited in Syria. It is appropriate to add that these sanctions do not apply to territories captured by the rebels.

From the main decision - the provision of heavy weapons to the rebels and MANPADS, as well as the creation of a no-fly zone along the Turkish or Jordanian border, which will be the starting point for a new attack on Damascus - Washington is just half a step away.

The meeting of representatives of the Syrian opposition 6 in March in Istanbul's Wyndham Hotel ended in thirty minutes with a mutual assault, during which, as they say, Ahmed Jarba’s face in Kuwait’s Arab League summit touched the hands of the unification process. . According to Western intelligence sources, today around 70% of armed opposition groups "are unified and jointly oppose the Assad regime and the Islamists."

Obama's visit to Riyadh is scheduled for March 28-29. By the end of the week, apparently, it will become clear what path the opponents of al-Assad have chosen to "finalize" the Syrian issue.

Ctrl Enter
Noticed oshЫbku Highlight text and press. Ctrl + Enter
We are
Bashar Al-Assad: We have absolute confidence in our victory (+ full text of the President’s interview)Interview by President Bashar Al-Assad to the Sunday Times
Military Reviewin Yandex News
Military Reviewin Google News
66 comments
Information
Dear reader, to leave comments on the publication, you must sign in.