For the attention of revolutionary Ukraine: about the advanced and sad experience of the show-fight with the Polite Bear 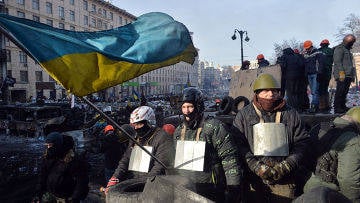 
Vivid performances of the current Ukrainian elite - the digging anti-tank holes in the Donbass, the shooting of Russian from the nuclear weaponsthen requiring NATO combat tanks and airplanes, - make many in Russia assume that they are all stubborn there.

Such an assumption is simply from lack of information. Anti-Russian show projects have their own laws of development, Russian from the Big Earth is incomprehensible. The Russians of the Big Earth are too accustomed to the boring reality: the country has been living for ten years now, the country of 12 has been winning the frontiers of its real enemies for years. Already a couple of years does not store, as it turned out, the money of the elite in the West. The country has to decide for itself what is good and what is bad.

Ukrainian elitist, it is important to understand, think in fundamentally different categories. They act not in the space of the boring reality of a huge country, but in the space of a concrete show-project “Free Nation against the Bloody Bear”. Where, instead of politics, there is exclusively shpaglot-ing, exhalation of fire, and other special effects.

To understand how these two worlds - reality and show politics - are inconsistent, it is worth turning to the instructive experience of the Baltic republics. These small states were the main show fighters against the bloody bear for twenty years, and now they are experiencing a real historical tragedy and breaking the worldview. For when it came to real (albeit weak) EU sanctions against Russia and vice versa, it turned out that Latvia and Lithuania could not fight a bear in any way. Because in the world of dull reality, they have been fixed under it for a long time and reliably.

This is something to tell us more.

... Throughout the winter, Lithuania positioned itself as a guru of Ukraine on the road to freedom. Officials brightest of all were in favor of a Euro-association, louder than anyone denounced the Russian intervention, and were writhing on Maidan almost as often as the Poles. In late February, the Russian ambassador to Lithuania was even summoned to the carpet at the Lithuanian Foreign Ministry, where he was told to explain how long Russia would violate international norms in Ukraine.

Two weeks passed, and the upset Lithuanian prime minister delivered a message in parliament: the republic’s main transit port was in fact blocked by the Russians. “There is nothing to hide. Already from all Klaipeda port terminals it is impossible neither to export, nor to re-export, nor to import. And here is an example: if the United States was transporting chicken legs through the Smelte refrigerator, the American company was instructed to export through other ports that do not belong to Lithuania and some other countries. ”

Another week passed, and a bunch of traitors to Freedom and Civilization Choice were discovered in Lithuania. A large local transit businessman declared: “Russia is a superpower, and we cannot set it a tone. Today we need to rethink the whole strategy. Maybe no longer need the army? Times have changed. You need to be friends with your neighbors. The situation is this - we will stand an hour and twenty minutes or two hours, or in general we will be a quiet country. Why do Danes live well? Because at some point they raised a white flag ... ”.

Olympic champion basketball Marchulёnis, now leader of the hotel business, colleague support. He added that he was due to the policy to employees pay nothing.

Well, and so on. So far, that part of the Lithuanian elite that rests from the world of show politics, brands traitors and urges businessmen to reorient themselves from the Eurasian markets to some other. But on what - does not speak.

In neighboring Latvia, we are seeing an even more schizophrenic picture. Latvia, one of the perennial wrestling stars with a Russian bear, opposes sanctions against Russia. Because there, of course, there is bloody Putin, the imperial aggression and the Crimean referendum at gunpoint (this is the local media diligently pronounce, so it should be) - but there is one nuance.

At the level of a sad reality, Latvia now exists as a transport and relaxation center in Russia. And it cannot exist otherwise.

Over the past year, the bloody Russian business has invested half a billion euros in Latvia - and, unlike the Europeans, in fixed assets of enterprises. That is, not in banking speculation, but in transit, food and real estate. With this money, in fact, a half million local and live (although, of course, not rich. The average salary, if in rubles, - thousands 15 – 20).

The entire resort area is built up with mansions of small-sized Russian businessmen aged over fifty dollars, loving deserted and temperate climate. There are no others there. “Transactions have risen,” a local realtor admitted to me. - “Russians”, how many deals were almost signed home in Latvia, - put them on pause and say, no, let's wait. Our panic is already beginning slowly .... ”

The only nationwide sports show in the republic is the departure from the success of the all-Russian Riga Dinamo in the imperial Russian KHL. There are no others there.

The only gas supplier is Russia. There simply cannot be any other, any “reorientation” to American LNG is a common fantasy, and everyone knows that.

One of the main local oligarchs and concurrently the mayor of the port of Ventspils, A. Lembergs, spoke about the possible EU sanctions against Russia: “Transit in Ventspils to 80% depends on Russian goods. Latvia is so integrated into the international system of division of labor, including with the participation of Russia, that no one can afford any sanctions. If, however, the sanctions are imposed ... It's like hanging in protest. It is then easier for us to go and drown ourselves together in the Baltic Sea. ” The end of the quote.

... I'm all for what. The Baltic mini-elites, unlike the Ukrainian ones, have learned a simple thing in just 20 years: the “civilization choice” is a fiction. For the historical, geographical and economic part of the Russian world, “go to the West” and become part of European Civilization is possible only at the level of show politics. And only if all this sweaty fight with a bear does not accidentally fall out beyond the limits of virtuality, into the real world. Where the streets of the Baltic cities, figuratively speaking, have been patrolling the Polite Bear for a long time.

But the Ukrainian revolutionary elite is only to realize this. However, it will not take any twenty years, for the simple reason that Ukraine simply does not have them.

And to no - and there is no court. Therefore, no one is interested in the awareness of the revolutionary elite.

Ctrl Enter
Noticed oshЫbku Highlight text and press. Ctrl + Enter
We are
About Stalin and KhrushchevWhat you didn't want to know about England
Military Reviewin Yandex News
Military Reviewin Google News
177 comments
Information
Dear reader, to leave comments on the publication, you must sign in.