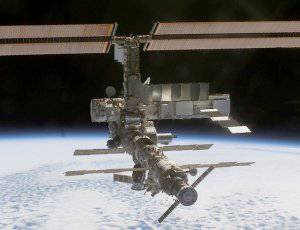 I would rather trust Ivan with a spanner than a graduate of the California Polytechnic with his degree and computer heaped up.

It's time to say Russian thanks. The time has come to thank them for keeping the international space station afloat while the shuttles were screwed down at NASA's car service center. For more than two years, they brought astronauts there, supplies, and garbage. Without them, we would only have to submerge the ISS in the ocean or roll up the fuel tanks of the 'shuttles' with scotch tape and hope for the best.

But once the officials from NASA wanted to expose the Russians in general from the ISS project. They complained that the Russians did not have a penny in their pockets, that they could not do anything on time. These stupid-Ivans have no idea about high technologies: they only know how to rivet a couple of sewer pipes, pour kerosene in there, put a couple of astronauts on top and launch it all to the shed in an orbit called Mir.

But Bill Clinton decided: the Russians should stay. Smart guy this bill! The fact is that the Russian space program is more secure and reliable than ours. Since Columbia burned in the atmosphere, the Russians have successfully delivered five crews to the ISS.

Russians act according to the principle: everything ingenious is simple. They first launched the Soyuz ship in 1967. His parachute refused and the astronaut was killed. Three more astronauts died in 1971, when the cabin was depressurized during descent. But after that, all manned flights in the USSR and Russia were without victims. The 'shuttles' became the grave for the 14 astronauts. Disasters 'Columbia' and 'Challenger' suspended the US space program for a total of more than five years and cost billions of dollars.

The Russians, meanwhile, simply fly into space. They have developed an effective basic design and remain true to it. Americans have created a much more technically sophisticated ship, and today, almost a quarter of a century later, they still do not understand how it works. To launch ships into orbit, Russians use the Soyuz rocket, designed as early as 1960. It became the workhorse of their space program: on the Soyuz account, more than 1000 launches, it delivered everything to the orbit, from military satellites to space tourist Dennis Tito. Designers call such a rocket 'simple as an ax'. The Chevrolet 1967 pickup immediately comes to mind - it has already run 245000 miles, rusted through and through, but it still starts up the first time. Here and Russian rockets are reliable as a rock.

Dozens of years, exploiting the same system, you will study it as flaky, and you can fix any problems. You are guaranteed against unexpected 'stabs in the back' due to burned-out sealing rings or loose insulation sheets. And if a failure occurs, you can quickly find out and eliminate the cause. In 2002, when the Soyuz with an automatic ship exploded at the start, the Russians quickly realized that this was not due to design defects, and in less than a month they successfully made a manned flight. Contrast this with delays due to the disasters of the American "shuttle".

The Russians have spent more than one decade to minimize the possibility of any problems with space systems, and all this time we have been moving in the opposite direction. If I had to fly, I would choose the 'Union' and not the 'shuttle'. I would rather trust Ivan with a spanner than a graduate of the California Polytechnic with his degree and computer heaped up.

And in this I am not alone. When the Chinese - the masters of technological 'piracy' - launched their manned flight program, they did not steal the drawings of the 'shuttle', but copied the 'Soyuz'.

In 2010, the 'shuttles' are written off. The high-tech system X-33, which was designed to replace them, was so high-tech that it was unsuitable for practical use, and the project had to be abandoned after 1,3 had already spent a billion dollars on it. Now we have something called the Crew Exploration Vehicle: the project will cost 15 billions of dollars, and the first launch is scheduled for 2014. The new generation problem will come to our space program.

The Union, by the time of the first flight of the shuttle, faithfully served its creators for almost 15 years, and will continue to do so - after the last shuttle enters the eternal parking lot at the Smithsonian Museum aviation and astronautics. Unlike the shuttle, the Union is eternal. It won’t surprise me at all that we will have to rely on him again to help out the Pilot Research Ship program.