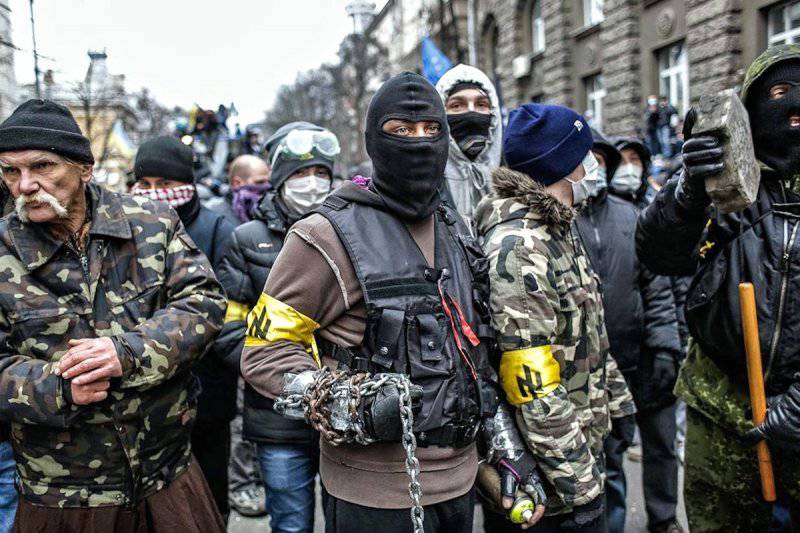 2 week unregistered campaign weaponsannounced 7 March and. The Minister of Internal Affairs of Ukraine, Arsen Avakov, showed results directly opposite to those expected: none of the armed groups of the Maidan, including the Right Sector, failed to hand over their pistols and machine guns, and the demand for hunting rifles and traumatics beat ordinary Ukrainians.


Still, Avakov had to report on the results of the campaign: the Ukrainians brought to the Interior Ministry bodies one and a half thousand firearms, another three thousand were allegedly confiscated by the police themselves. This is a tiny part of unregistered weapons in Ukraine, the number of which was estimated by various experts before the “Euro-revolution” at 3-4 million “trunks”. After the revolution, this arsenal was considerably replenished: only during the pogrom of the Lviv City Department of Internal Affairs almost 650 of service pistols, fifty AK-47 submachine guns, six sniper rifles and three thousand cartridges disappeared. By the way, only seven machine guns and fifty pistols were officially handed over from this amount.

The “Right Sector” and other “Euromaidan” groups, which were not part of the “hundreds of self-defense” and refused to join the national guard created feverishly, do not want to part with weapons. This was unambiguously stated by the nationalist leader Dmitry Yarosh, and his brother Sashko Bily in a famous video, waving a machine gun, promised the acting president. Minister Avakov has a terrible punishment if he tries to take away this machine gun from him. In Dnepropetrovsk, the Right Sector organized a show of surrender weapons: four militants in masks came to the city department and, with witnesses, surrendered these masks, promising not to hide their faces anymore. They also notified the police that they had a weapon, but would remain with them "for self-defense."

By the way, the number of members of the “Right Sector” in Dnepropetrovsk is already in the hundreds, and soon they can be legalized: on Saturday, the group announced it was transformed into a party.

The reluctance of radical nationalists to disarm and join the guard, according to observers, may soon turn into a violent conflict between the militants and their “fellow soldiers” who have joined the state. “The Guard, like self-defense, is the project of Freedom, Avakov, Parubiya — those who now declare that they are power. With Yarosh, they have not shared this power, no one is going to finance it at the state level: it is now for many political rival. Yarosh himself cannot disarm his fighters — where authority and security will go to. And here either trades with acting president Turchinov or shooting. Considering the general excited state of negotiators, first shooting, then trades, ”described the RG "the situation is a former employee of the Security Service of Ukraine ains.

However, the new Ukrainian government has every chance to get out of the situation in an original way. A draft law on the legalization of short-barreled firearms for authorship of Svoboda party members has been submitted to the committees of the Rada. If this law is passed, the official Kiev can no longer bother to disarm the militants, figuring out what kind of "hundred" or detachment of the Right Sector is behind the next raid on the bank or robbery on the street. Citizens of an independent Ukraine will have to ensure their own security on their own.