Will Russia increase the volume of military cooperation with China? 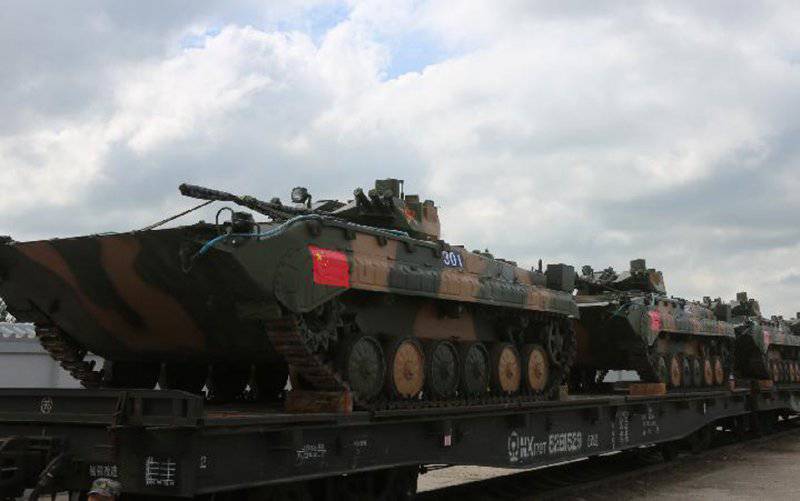 The political crisis in Ukraine can already be called a turning point in stories development of relations between Russia and Western countries. Washington and Brussels categorically refuse to dialogue with Moscow and have declared their readiness to break business ties, as well as to stop cooperation in the defense sphere. In such a situation, Russia has no choice but to make the East, in particular, China, the main goal of its foreign policy: thanks to a dynamically developing economy, the Middle Kingdom will be able to replace many of Russia's western partners. At the same time, the key role will belong to military-technical cooperation, since both in Moscow and in Beijing they understand the threat that the Russian and Chinese peoples may face - or have already encountered.

Ukraine has become an apple of contention between Russia and the West, and it seems that over the next few decades it will remain one of the most acute problems in relations between Moscow, Washington and Brussels. Already, the United States and the European Union have imposed sanctions against Russia, albeit amusing.

But the Ukrainian crisis can last for years, which means that in relations between Russia and the West there will be many more ups and downs. Events in Ukraine in the media have already dubbed the beginning of the new Cold War, although such judgments seem premature, because the confrontation has not yet reached such a scale when the way back is cut off: Russia is still open for dialogue and ready to discuss any constructive proposals.

Nevertheless, the West obstinately turns up its nose and refuses a peaceful discussion of the Ukrainian problem. The Kremlin understands that if it is not possible to establish diplomatic cooperation with the European Union and the United States in the near future, it will be necessary to use armed forces to deter the aggressor. However, after the conflict with the West, Russia will not remain without partners: the Russian weapon is in high demand in all countries of the world, and many states want to enlist the military and political support of Moscow.

The greatest interest in cooperation with Russian defense enterprises is shown by India and China. Russia sells India modern military equipment, and China helps in the implementation of joint military-technical projects.

The development of Russian-Chinese relations is largely constrained by the conventions that exist in connection with the policies of the West. However, ending the “friendship” with the United States and the European Union will inevitably lead to the lifting of these restrictions. Most likely, Moscow will expand arms exports and increase supplies to India and China, as well as find new markets in those countries where Russian companies used to be not particularly active due to the desire not to conflict with the states of the Western world.

Before the Ukrainian crisis, the approach to building business relations with China was rather complicated. Russian specialists had to take into account many factors, such as foreign policy calculations, the threat of arms competition with Beijing in the markets of third countries, the leakage of Russian defense technologies in the Celestial - Chinese engineers are famous for their love of copying weapons.

They also drew attention to such risks as a sharp deterioration in relations between Russia and China - although this threat is unlikely, it should not be completely ignored. Due to security concerns, China received less access to Russian military technology than India, despite the fact that Delhi has its limitations. This led to a prolonged stagnation in matters of military-technical cooperation.

But now Moscow has become necessary to abandon conventions, since the West has completely discredited itself and began an open confrontation with Russia.

If the crisis in relations with the North Atlantic alliance continues to deepen, Russia will need to ensure the rapid growth of the military potential of the BRICS countries. Despite a well-developed economy, China still remains a backward country militarily and therefore is not objectively able to resist the United States. Of course, while maintaining the current pace of economic development, the defense potential of the Middle Kingdom even without Russian support will increase significantly, but this will take many years.

However, China has no time. He wants to get all-round assistance from Russia right now - and here the interests of Moscow and Beijing coincide.

The PRC wants to arm itself in order to withstand the pressure from the United States and the American puppets - Japan, South Korea, the Philippines and Taiwan, which pose a serious threat to the strategic interests of the Middle Kingdom.

In connection with the coming confrontation in the Pacific, China buys Russian fighters and submarines. Last year, Moscow and Beijing signed a framework agreement on the supply of diesel submarines such as Lada and Su-35 aircraft to the Middle Kingdom. Thanks to the acquired weapons, the PLA will be able to stop any military threats from the states of the Pacific basin.

Despite the fact that the armed forces of China are the most numerous in the world, they have at their disposal obsolete weapons. The PRC is facing a difficult task to modernize military equipment in the shortest possible time, and the Celestial Empire partially copes with this task: over the past few years, intensive work has been done on fifth-generation fighter aircraft, while the fourth-generation aircraft are practically absent. Thus, Chinese engineers are planning to make a big leap in the development of national defense - but they are unlikely to succeed in achieving the objectives set without outside support, including without the help of Russia.

Moscow is also interested in bringing the PLA to a qualitatively new level. Of course, no one will reveal all the secrets of military technology to China, but if the tense relations between Russia and the West worsen, it is possible that Russian specialists and defense enterprises will actively participate in the modernization of China’s armed forces.

In addition to conventional weapons, Russia can transfer nuclear technologies to China, such as reactor circuits for equipping spacecraft. Also, the Celestial Empire can buy nuclear submarines - which is fully consistent with the new military doctrine of China.

Beijing wants to improve the missile attack warning system as well. In conditions when one of the strongest nuclear powers - the United States - becomes your enemy, you should always be on the alert: Washington is not shy about the means, and uses the widest range of military and political methods, ranging from financing terrorism to frank armed blackmail.

At the same time, Russia can count on expanding military-technical cooperation with India. It is important to make sure that regional issues in South Asia are not solved without the participation of New Delhi, otherwise the United States and here will get a "monopoly on violence."

In general, the strategy of Russia on the Eurasian continent is simple: to create centers of power capable of withstanding the influence of the United States. Washington, in turn, is interested in splitting the Eurasian states to such an extent that anti-American alliances are in principle impossible. This strategy is described by Zbigniew Brzezinski, the main ideologue of modern US foreign policy.

But Russia will be able to easily thwart Washington’s plans if it activates military-technical cooperation with Asian countries. Then the United States will face at once with several powers capable of becoming a serious counterbalance to American foreign policy not only in Eurasia, but also in other corners of the globe.

Thus, the worsening of the Ukrainian crisis and the rupture of relations with Russia can cost the West dearly. The modern world is not as simple as it may seem at first glance, and the strengthening of positions in one region will inevitably lead to their weakening in another. The United States must understand that it is impossible to control everyone and everything, and for trying to establish world hegemony will have to pay.