April 13 2013
47
In Russia, all men were considered warriors, this tradition has been going on since the era of the so-called “military democracy”. There were, of course, specially trained knights who devoted their entire lives to the war, but all young men and adult men possessed military skills, be they townspeople, tillers, hunters. 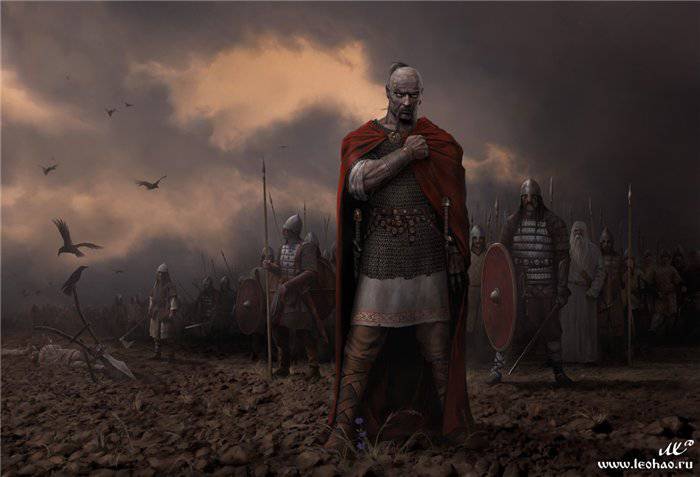 We must remember that growing up at that time was faster, a man in 14-16 years was considered quite an adult and could begin an independent life, marry. For the tiller of the whole community built the house, the boyar son entered the military service, the young prince received control of the city.

In addition, people of that time were very different from the present, and the comparison will not be in our favor. Almost all of them were mentally and physically healthy. All painful children died in the first years or at birth - natural selection acted. Survived the most healthy, in the future constant hard physical labor of the tiller, craftsman, hunter, warrior strengthened them. There were no current evils of industrial and post-industrial societies in Russia — alcoholism, drug addiction, prostitution, fornication, obesity from lack of movement, overeating, etc.

The first step in becoming a man was an initiation, the transition from the age of infancy to the state of a child (boy) - in 2-3 of the year. This milestone was marked tonsure and saddling on a horse. It should be noted that this custom existed among all social strata. This sacred rite dates back to the time of gray-haired pagan antiquity. Only later did the church take the veil of service for armament. The rite of passage is traced among all the peoples of the Indo-European root, in Christian Europe it has been preserved as a ritual of initiation into knights.

This is a very important psychological line, he created a special mood in boys, laid the basic principles of life. The boys were tuned in to the fact that they were defenders of their family, community, city, region, the whole of “Light Russia”. They laid the core that determined their fate. It is a pity that this tradition is almost lost in today's Russia. Men are brought up by women - at home, in kindergartens, at school, in universities, as a result, there is very little “masculinity” in the country, the Russians are no longer Warriors. Only in a critical situation, in war, does the part of the Russians wake up the patrimonial memory, and then the Russians have no equal in battle. Partially such upbringing has been preserved among the Caucasian peoples, in Chechnya, but in a perverted way, there its people are considered elected, and the rest are humiliated (a kind of Nazism).

The main thing in the education of a warrior is the upbringing of the Spirit, our forefathers knew this very well. The great Russian generals knew this, for example, A. Suvorov, his “Science to conquer” is flesh of flesh, the heritage of ancestors.

In Eastern Russia there were no special schools (at least there was no news of their existence). They replaced the practice, tradition, apprenticeship. From early childhood, boys were taught to arms. Archaeologists find a lot of wooden swords, their shape is consistent with real swords. This is not the current plastic toys - an experienced fighter with a wooden sword could stand up to the enemy, the weight of a wooden oak sword almost matched the iron one. The young warrior’s kit also included: wooden spears, knives, bow with arrows (simple bow).

There were toys, games, developing coordination, agility, speed - swings, various sizes of balls, turntables, sleds, skis, snowballs, etc. Many of the children, especially from the nobility, already received small children fighting weapons - knives, swords, hatchets. The annals describe cases when they used them, killing the enemy. The knife has been with a man since childhood.

A. Belov dealt with the existence of a special school of battle in Russia, he created the system - “The Slavic-Goritsky struggle”. He confirms that combat training was held in the form of a folk game and then the “form” was supported by regular competitions, which took place on holidays, most of them had pre-Christian roots (Kupala, the day of the winter solstice, and others). Single fist fights, wall-to-wall battles were common until the 20 century. The children absorbed this battle culture almost from the cradle.

Teaching was conducted at the teacher-pupil level, compare: in Russia there were no universities before the 18 century, but cities and temples were built, guns and bells were cast, books were written, the level of education of the population in the X-XIII centuries was much higher than in Europe (as well as hygiene). Skills were passed from teachers to students in practice, in order to become a master architect, the Russian did not go to a special school, but became a master's student, also in military affairs.

The most important role played practice, Russia waged constant wars with neighboring nations, often went on internecine wars. There was no shortage of real combat conditions; young warriors could test themselves in practice. Naturally, the war took its tribute, but those who survived received a unique lesson. You will not receive such “lessons” in any school.

In peaceful life, martial skills were supported not only by folk games, but also by another important area - by hunting. This currently beast has almost no chance against a man with a firearm. Then the struggle was almost equal - claws, fangs, power, developed feelings against human skills and knives. A warrior was considered the one who got the bear. Imagine yourself with a hunting spear (spear) against a bear! Hunting was an excellent training for maintaining the Spirit, fighting skills, learning how to stalk, track down the enemy. No wonder Vladimir Monomakh in his "Instructions" recalls with equal pride about military campaigns and hunting exploits.

To summarize: the boy was made a Warrior, a defender of the Sort, Motherland based on mental attitudes (in a modern way - programs), which were introduced from birth (even before birth, so-called prenatal education), traditions of children's and adult people's games constant practice. That is why the Rus were considered the best fighters of the planet, even the Chinese emperors were guarded not by the fighters of their monastic orders and schools, but by the Rus soldiers.

Ctrl Enter
Noticed oshЫbku Highlight text and press. Ctrl + Enter
We are
Small hunters MO-4 "midges"Don Service Komarich 1646 of the Year
47 comments
Information
Dear reader, to leave comments on the publication, you must to register.