March 15 2014
103
The Ukrainian crisis is very difficult to describe in the language of logic and political analysis. Because emotions are going wild, plus the “Dnepropetrovsk” ones, who have taken power in Kiev, do not really control either the economy, nor the army, nor the security agencies, nor the oligarchy. The only thing they are trying to control is information and political hysteria. And I must admit, they are good at it. Moreover, the game of forcing hysteria comes from the end of October - when the swing began with the signing and non-signing of the Association with the EU - therefore, Ukrainian society is no longer just deeply painful, but already contagious. Ukrainian mass hysteria has spread to the Russian media, which, for the first time in 20 years, have become closely interested in Ukraine and its internal politics. All of a sudden there was a case before the Crimea, before the Russian military bases, before the Russian and Russian-speaking, to the South-East and other problems that did not arise yesterday or even the day before yesterday.


Ukrainian political crisis is systemic and cyclical. It's enough to remember history all Ukrainian presidents.

Leonid Kravchuk: the board led to the uprising of miners and early presidential elections.

Leonid Kuchma: the reign ended with the first Maidan.

Viktor Yushchenko: he left the post of the head of state in disgrace, loyal and despised by all.

Viktor Yanukovych: like Leonid Kravchuk, he was not able to see even one term in his chair.

The fact that only now in Russia, Belarus, Kazakhstan and the rest of Eurasia they became so interested in the “Ukrainian crisis” only shows that the show politician, unfortunately, remains the main engine of our media.

Maybe radical Ukrainian nationalism appeared yesterday? Or maybe the oligarchy has become a real power after the victory of Euromaidan? Or, perhaps, Viktor Yanukovych is the first Ukrainian president who was engaged only in personal enrichment against the background of multi-vector and total betrayal of voters and allies? Or did the monuments of the “Soviet and Russian occupation” begin to destroy yesterday? 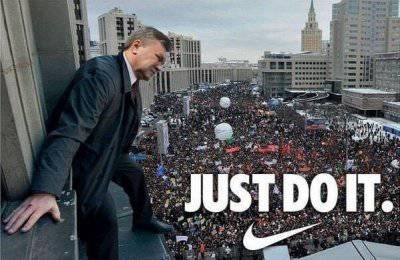 The Ukrainian Euromaidan is a legitimate historical, political and socio-economic finale of the destruction of the state in the republic. Because there was no other state, except the Ukrainian SSR, on this territory - and each Ukrainian president was only engaged in dismantling his part of the state. Kravchuk began with the Black Sea Shipping Company, Yanukovych graduated from sea and river ports. Kuchma and Yushchenko had a hand in Oblenergo, metallurgy, mechanical engineering and the chemical industry. And the new government in Kiev is no different from its predecessors - at least this is indicated by the list of IMF requirements and plans for the privatization of the power industry, Naftogaz and the land.

The crisis of the state is systemic and cyclical. Moreover, the cycles directly coincide with the electoral cycles and the change of presidents and parliaments.

However, the fewer the state became in the republic, the more rights society won for itself. The oligarchy, like armed people in masks, are all phenomena of the same order and the result of the self-organization of society. If there are no armed forces in the state, private armies and self-defense units are formed in their place. In the place of the Ministry of Internal Affairs come OPG, and instead of the Ministry of Industry and Industry appear private corporations.

Therefore, the Ukrainian case is not at all unique, and mass hysteria in the media only prevents one from understanding the true causes of the collapse of the state. Because in a state of hysteria to deal with anything, in principle, it is impossible.

The first step in getting out of hysteria is a sober analysis of the situation. With its subsequent description in a language understandable and accessible to the masses. If we are facing enemies and traitors, then we need to explain what, in fact, their enemy and traitorous essence.

Branding, escalating and hysteria - this is not the best way.

The Ukrainian crisis, in the understandable language of literary images, is aviation corkscrew. The first pilot ejected, and business-class passengers broke through to the helm, who believe that the ticket price gives the right to steer. Yes, and the runaway pilot was also a business class character, and he only cared about the comfort of the cabin: so that the seats were leather and with ventilation, the stewardesses were nice, to sleep longer and that the eldest son could twist the steering wheel if desired. After the first pilot disappeared, some passengers from the Crimea also preferred to eject. That, in fact, is the whole Ukrainian history at the level of the plot and without tantrums.

And as a matter of fact - it is already impossible to drive out of the Ukrainian corkscrew, whoever you sit in the cockpit. The state of the union type, which quietly sawed all 25 years, ordered to live long. Before us is the agony of the Ukrainian SSR. And the most important question is the question, and what kind of state will be instead of the Ukrainian SSR in Ukraine, and will it be at all?

And for Russia, this question is more than relevant, because the prerequisites for their Euromaidan in Russia itself are more than enough. Because the state in Russia, of course, is not as weak as in Ukraine, and there is still a margin of safety. However, if you do not understand the socio-economic and historical-political sources of the collapse of the state in the republic and do not project them on Russia and allies, then this margin of safety can be quickly exhausted.

First of all, it is necessary to stop the information hysteria and start drawing conclusions from Euromaidan. Because in the very near future there will be a collapse of the state in the next neighbors of Russia. Now we do not know who exactly is on the waiting list, but judging by the state of the state, it will be either Tajikistan, or Kyrgyzstan, or Uzbekistan.

Therefore, if you do not stop the hysteria in the media, do not abandon the show policy and do not proceed to the analysis of the true causes of the collapse of the state - then the entire safety margin of Russia will be spent on "putting out fires" from neighbors. And then the time of its Euromaidan will come in Russia.

Ctrl Enter
Noticed oshЫbku Highlight text and press. Ctrl + Enter
We are
The world we leave, the world we enter, and the world between themWhat you didn't want to know about England
Military Reviewin Yandex News
Military Reviewin Google News
103 comments
Information
Dear reader, to leave comments on the publication, you must sign in.