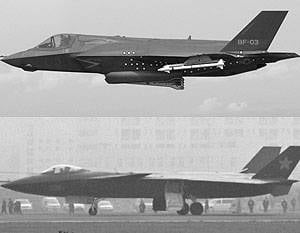 Chinese aircraft designers mastered the creation of the American fighter-bomber Lockheed Martin F-35 Lightning II during cyber espionage, which was conducted by Chinese intelligence agencies from 2007, the American media reported, citing sources in the US Department of Defense.


According to Washington Freebeacon, Lockheed Martin has fallen victim to years of cyber espionage behind targeted US government and industry programs.

In January, the Global Times newspaper reported, citing sources in the Chinese Communist Party, that key technologies from the American Lockheed Martin F-35 Lightning II fighter had arrived at the disposal of the People's Republic of China, the Chinese aircraft manufacturers used them to create the fifth-generation fighter J-20 (Jiang-20) ) modification number 2011. At the same time, the publication did not confirm the fact of data theft.

According to the Global Times, the acquired technologies include an electro-optical guidance system, an adjustable jet nozzle and the latest radar systems.

In this case, the US military believes that the technology was stolen. According to representatives of the US Department of Defense, the data “leaked” through the efforts of the Chinese Bureau of Technical Intelligence in Chengdu Province. From there, the information fell into the state corporation of China Aviation Industry Corp (AVIC).

AVIC's subsidiary, Chengdu Aircraft, used technology to create J-20, which was presented at the end of February 2014. About this Freebeacon reported sources in American intelligence.

The Pentagon fears that the leakage of technology could occur due to the joint venture agreement signed by General Electric and AVIC in 2011, the year.

It is noted that the administration of President Barack Obama ignored the concerns of the US military, which contributed to the systematic easing of control over the transfer of technology to China.

Assumptions by US officials about “stolen technology” were confirmed by photos of J-20, which were circulated by Chinese media.

The images of this prototype first appeared in December 2013 and in January 2014. It seemed that the photos were digitally processed, but the 2011 tail number was visible in the pictures, and there were also changes that were aimed at improving engine performance and combat capability.

The upper edge of the engine air inlets is sloped down, the keels are cut along the upper rear edge, the niches of the main chassis and the compartments weapons have more pronounced "teeth" to reduce radar visibility, the cockpit canopy has a "visor", as on the F-35.

In addition, the Chinese fighter used a distributed system of infrared sensors, as in the US F-35. One of the most significant developments in the J-20 is the presence of an electron-optical guidance system under the nose of the machine.

Experts believe that technologies “stolen” by China seriously undermine the uniqueness of the American F-35.

The first test flight of Jian-20 was made in 2011, but at that time the prototype created by the Chinese did not reach the level set by the promising developments of competitors - the Russian T-50 fighter and the American F-22.

Among the shortcomings of the J-20, military observers pointed to insufficient engine power, the inability to fly at supersonic speeds, the imperfection of the radar system and stealth technology, which makes it possible to reduce the aircraft’s visibility in the radar range.