Yatsenyuk is engaged in defamation and the spread of deliberate lies in relation to the whole country, - the Ministry of Foreign Affairs of Abkhazia 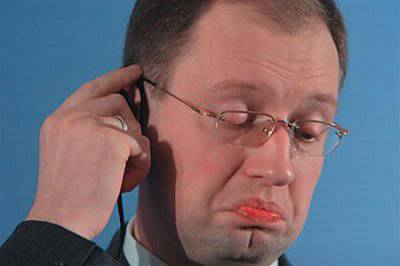 
"Referring to information obtained from clearly dubious sources, Arseniy Yatsenyuk asserts that in Abkhazia, corruption, lawlessness, banditry and trade reign in the background of economic chaos and unemployment. weapons. Arseniy Yatsenyuk describes the future of the Republic of Crimea in the event of its secession from Ukraine, ”the Ministry of Foreign Affairs reminds.

In the civilized world, it is considered indecent to demonstrate one’s own ignorance in public, the statement says. “However, in this case, it doesn’t surprise anyone, because Arseniy Yatsenyuk exists in a special coordinate system set by an illegitimate armed coup that brought his government to power. In this coordinate system, rampant extremism and acts of fascist thugs, among whom are those who fought as part of the Georgian gangs against the people of Abkhazia in 1992-1993. In Kiev, it became commonplace to violate the constitution and laws, making decisions based on "revolutionary expediency", the statement reads. and the Ministry of Foreign Affairs of Abkhazia.

The notorious "information" of Arseniy Yatsenyuk, the document says, is suspiciously similar to the malicious lie that former Georgian President Mikheil Saakashvili spreads about Abkhazia. “Apparently, it is not by chance that this person, discredited and despised everywhere, including his native Georgia, worked as an adviser to the“ revolutionary ”government of Ukraine,” they assume in Abkhazia.

The Ministry of Foreign Affairs of the Republic reminds Yatsenyuk that "the Republic of Abkhazia is, albeit a small, but accomplished state, where power is formed by a legitimate constitutional way through free and democratic elections, and not as a result of armed coups and" Maidan ".

According to the ministry, after the recognition of the Republic of Abkhazia by the Russian Federation, the annual economic growth in the country amounted to 13%, foreign trade turnover grew by almost 300%, and household income increased by 450%. The restoration of the social infrastructure destroyed by the armed forces of Georgia is in full swing. That is why, they stress in the Ministry of Foreign Affairs, Abkhazia is becoming more and more attractive for guest workers from other countries, including Ukraine, Moldova and the Baltic countries - parts of the European Union. "The Republic of Abkhazia is annually visited by more than a million tourists from various countries of the world. New hotels, restaurants, cafes and other tourist and recreational infrastructure are being commissioned. In 2013, about seven million people crossed the state border of the Republic of Abkhazia in both directions," the Foreign Ministry said .

"Unlike the Kiev authorities, in our country they carefully treat ethnic and linguistic diversity. The chauvinistic principles of state policy are unacceptable for Abkhazia," the document says.

No matter how Yatsenyuk tried to prove the opposite, "Abkhazia is a modern, dynamically developing, democratic country," "The Republic of Abkhazia is confidently moving along the path of international recognition of its independent statehood and does not intend to turn off this path," the statement says.

At the Foreign Ministry of Abkhazia, Arseniy Yatsenyuk is advised to “think more carefully about what he is going to speak on behalf of the government in Kiev,” since “it’s unworthy of a person who claims to hold a high government position to disseminate deliberate lies and deception was not".

“Returning to the events in Crimea, we believe that under the circumstances, citizens living in the autonomous republic have the right to independently choose their future fate and political status of the peninsula in accordance with the universal right of peoples and nations to self-determination,” the Abkhaz Foreign Ministry concludes.

Ctrl Enter
Noticed oshЫbku Highlight text and press. Ctrl + Enter
We are
The Verkhovna Rada of Ukraine proposes to open a criminal case against Gerashchenko for involvement in the creation of the scandalous site "Peacemaker"Russia has established its own presence in Abkhazia, South Ossetia.
Military Reviewin Yandex News
Military Reviewin Google News
106 comments
Information
Dear reader, to leave comments on the publication, you must sign in.