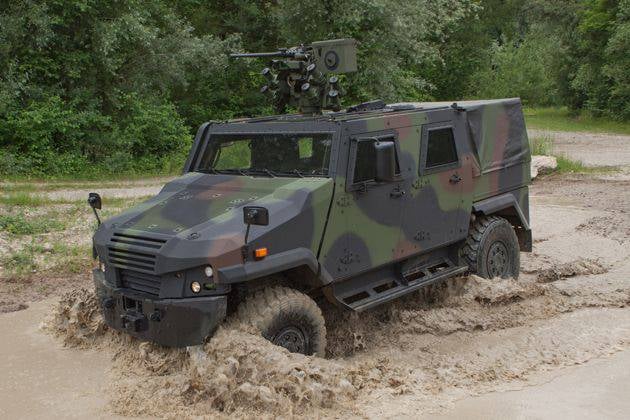 
The contract was concluded as part of the procurement program for commander and special armored vehicles (German. Geschutzte Fuhrungs- und Funktionsfahrzeuge - GFF) “Class.2”.

The first contract for the supply of 100 armored vehicles "Eagle 5" the Federal Office for Armament, Information Technology and Operation of Germany (BAAINBw) signed with the company GDELS in June 2013 of the year. It included an option to supply the 76 BBM, which is now implemented.

The decision to purchase was made after the German Armed Forces carried out complex tests on the sites, during which it demonstrated compliance with the requirements of the Bundeswehr, including high maneuverability, throughput, survival and suitability for use for various tasks.

According to Jane's Differences Weekly, with reference to GDELS, all additional vehicles will be delivered to the German Armed Forces before the end of 2015. The cost of the purchase has not been disclosed.

The production of BBM will be carried out at the enterprises of the General Dynamics European European Systems Systems in Kreuslingen (Switzerland) and Kaiserslautern (Germany).

BBM "Eagle-5" is an improved version of the armored "Eagle-4", which were previously purchased to equip the German Armed Forces.

According to the developers, Eagle-5 allows to transport a large payload and provides a higher level of protection for the calculation with the same level of maneuverability. Due to the high unification of components in the BBM of the Eagle family (of the order of 80%), the total cost of operating new armored vehicles will be reduced.

The length of the BBM "Eagle-5" is 5,40 m, height - 2,38 m, width - 2,2 m, maximum combat weight - 10 tons. The machine is designed to carry up to 5 people. It is equipped with a six-cylinder Cummins diesel engine with an 245 hp power, an Allison automatic five-speed transmission and develops a maximum speed on the highway to 110 km / h. The BBM is equipped with an anti-WMD protection system, a patented anti-roll bar, a de-Dion suspension, a tire pressure adjustment system and permanent all-wheel drive. The modular protection system provides a high survival rate when firing from small arms weapons and undermining on mines and IEDs.

The German Armed Forces acquired a total of X-NUMX armored "Eagle-505" in the framework of the program GFF "Class.4". The GFF program includes four different hardware classes: 2-ton (GFF 5); 1 ton (GFF 7,5); 2-ton (GFF 12,5) and 3-ton (GFF 25). In addition to Eagle-4 and Eagle-4, as part of GFF 5, Germany purchased Enock, light armored patrol vehicles from Mercedes-Benz, as part of GFF 2; Dingo-1 of the Krauss-Maffei Wegmann (KMW) company as part of the GFF 2. For the GFF 3 program, KMW and Vicent 4x6 armored vehicles and Vicent 6x8 wheelsets are available from Rheinmetall Landsysteme.

Ctrl Enter
Noticed oshЫbku Highlight text and press. Ctrl + Enter
We are
Ready to show: European BBM get a new start in lifeWorld market and production of armored vehicles (part 2 of 3)
Military Reviewin Yandex News
Military Reviewin Google News
11 comments
Information
Dear reader, to leave comments on the publication, you must sign in.