Washington has no strength to fight for Ukraine 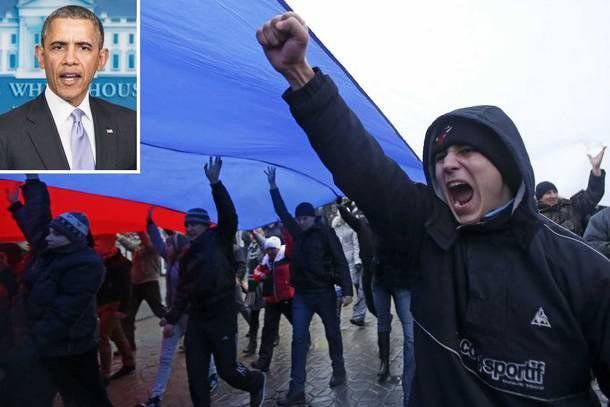 While the “evil dog” of American foreign policy — the head of the State Department, John Kerry — is sending aggressive phillipics to the Russian leadership, the Western press unanimously pinned Barack Obama to the pillory. But is everything so clear?

The prerogative to make harsh statements is the responsibility of the US Secretary of State. Therefore, it is not surprising that John Kerry promised the new Kiev authorities full support, and the Kremlin - international isolation, up to exclusion from the G8. However, it could not be otherwise. By its actions, Moscow broke the long and fruitful work of the United States to establish an obedient regime in Ukraine, that is, the Americans had to somehow release steam. On the other hand, the reaction of Barack Obama (namely, this indicator should be recognized as decisive in the US foreign policy strategy) turned out to be surprisingly lethargic.

On Friday, February 28, Obama made a special statement on Ukraine. He expressed concern and stressed that "external forces should not encroach on the territorial integrity and sovereignty of the country," warned that "the costs can be very serious." In addition, Obama admitted that he had discussed the situation with Vladimir Putin, and in the future they will continue direct contacts on this issue.

Analyzing the performance of Obama, the Western media were completely unanimous.

“Everyone is shocked by the presidential weakness, which I find stunning ... In fact, he said that we will not do anything,” commented columnist for the conservative Fox News channel Charles Krauthammer. He recalled to Obama previous foreign policy failures, stressed that 44-th President of the United States regularly speaks or does "too little" and "too late", and in the end has to face negative consequences. Islamist coup in Egypt, then crappy position in Libya, where the responsibility for the military operation had to take on French President Nicolas Sarkozy, finally, the "defeat" from Putin in the Syrian issue.

“I suspect that the president of Russia is not particularly concerned about the solemn statements of the international community about some of the consequences,” writes William Kristol from the conservative magazine Weekly Standard. “Putin understands actions, not solemn statements.” The journalist lists the measures that the West must take to force Moscow to retreat.

Greater determination is demanded from Obama not only by conservatives, but also by liberals. The most influential newspaper of the last newspaper, The Washington Post, insists on Saturday's editorial: "Condemnation of Russia's actions in Crimea is not enough." According to the newspaper, “The West responded only with telephone calls”: David Cameron and Angela Merkel talked with Putin, and the US Secretary of State - with the head of the Russian Foreign Ministry. “Lavrov objected that Russia does not violate the territorial integrity of Ukraine, and Kerry was not ready to object to him,” the newspaper complains.

So, maybe the whole thing is that today the White House simply has nothing to oppose to the Kremlin in the Ukrainian question? This point of view, for example, adheres to the columnist Peter Baker of the New York Times. In his article, he regrets that the United States has few real opportunities to make Russia pay the “high costs” that Obama faces. Moreover, the experience of recent years shows that “when Russia considers that its interests are at stake, it is ready to bear any consequences.”

John Kerry’s loud statements about plans to exclude Russia from the G8, were subjected to cold analysis. “Looking at the numbers, it becomes obvious that there is simply no leverage against Russia - it accounts for less than 2% of American trade, and Europe is still largely dependent on Russian gas,” says The Telegraph. “Several leading Republican senators are calling on the US president to use tough measures against Moscow, but this does not at all bring closer to solving the crisis, which exposed the limits of Western capabilities when any threat of force or security guarantees runs into a probable military conflict, in which know, NATO will never get involved. "

“Neither the United States nor NATO is able to do anything,” continues Yulia Ioffe on the website of the liberal magazine New Republic. - They showed it on the example of Georgia, because no one wants to start a war with nuclear Russia. So, while Washington and Brussels are puffing and wailing about the “red lines”, sovereignty and diplomacy, Russia will do what it sees fit, and we absolutely can’t stop it. ”
“At the moment we are not able to do anything to save Ukraine,” ex-Bush’s assistant national assistant for national security, James C. Jeffrey, puts an end to. Although, let's call a spade a spade, in all these discussions it is not at all about “saving Ukraine”. The question should be put like this: will the US risk its reputation by supporting the puppets who seized power in the course of an armed coup, or will they step aside so that Russia can complete the peacekeeping mission in close proximity to its borders?
A good half of foreign politicians and journalists are aware of the true nature of the conflict and directly place responsibility on the Western world.
“In recent months, the EU and the US have aggressively sought to separate Ukraine from Russia and draw it into their orbit, knowing full well that this will infuriate Moscow. Instead of recognizing that the cold war is over, we started it again without good reason, encouraging Russia's neighbors to join the EU or NATO, as if the USSR still exists, ”writes the British Daily Mail.

One of the most respected American Internet resources, Bloomberg, also justifies Putin, recalling that the Russian leader had tried for years to explain to “Western partners” the danger of squeezing Moscow out of the Crimea and flirting with Ukrainian nationalists, but the United States, the EU, and NATO stubbornly refused to hear him ...

And yet, being extremely cautious in expressions makes Obama not only his own weakness. It is logical to assume that the White House, having thrown Ukraine and Russia into the balance, made the right choice.

It would be possible to risk relations with Moscow, but for the sake of what? During the week, the new authorities of Samostiynaya plunged the country into anarchy, noted pogroms and purges, adopted a series of provocative laws, launching the process of cultural and language segregation of the East and South of Ukraine. It is quite reasonable, by the way, and the United States, the EU, and the IMF are dragging out the issue of giving Kiev long-promised loans ...

It seems that this time Barack Obama decided to turn off emotions and act according to the canons of real politics. After all, Russia has been deeply integrated into international political projects. Moreover, Washington put itself in dependence on the Kremlin on a number of issues. Elimination of the Syrian chemical weapons, evacuation of the American contingent from Afghanistan, Iran’s nuclear program, etc.

That is why Washington will ultimately be forced to recognize as legitimate the prevention of a military conflict in Crimea, conducted with the participation of the Russian armed forces. Indirect evidence that the Americans have chosen just such a scenario, are barely noticeable details. For example, the other day Barack Obama ignored a meeting of security officials in the White House to discuss the situation in Ukraine. Here you can write the following fact. A few days before the deterioration of relations with Russia, the United States recalled its ambassador in connection with the planned replacement. And it turned out that now Washington has a plausible excuse not to apply the extreme form of diplomatic pressure - “the ambassador’s reply for consultations”. Coincidence?

Ctrl Enter
Noticed oshЫbku Highlight text and press. Ctrl + Enter
We are
The end of a great friendshipWho will be the next victim of destabilization in the Middle East?
Military Reviewin Yandex News
Military Reviewin Google News
216 comments
Information
Dear reader, to leave comments on the publication, you must sign in.