Talking to a friend 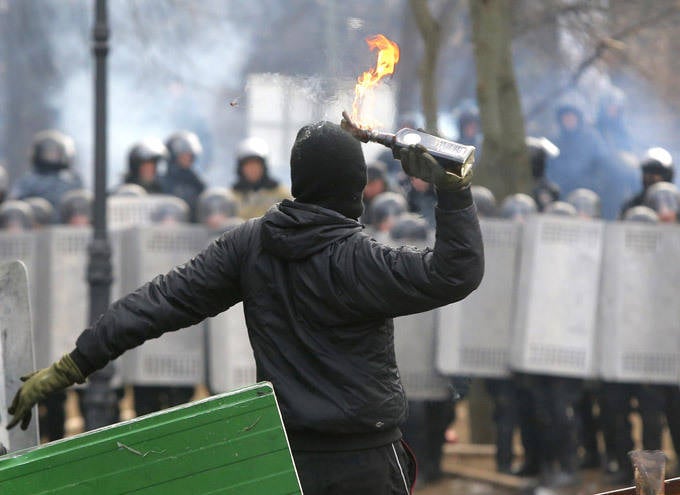 I look at your preferences and rhetoric on the Internet - and I am amazed. They did not kill ... No one was captured ... They became free ... ??? And Russia has occupied you ... utter nonsense !!! What kind of freedom is it? The dead on the Maidan. Bandyuki in masks and with bats. Kneeling people who have fulfilled duty and oath. Yarosh, White. Demolition of monuments to Kutuzov and the soldier-liberator, the seizure of administrative buildings, the appointment of frank criminals and Russophobes. At the same time, complete financial dependence on loans. The constant presence of the American fifth column. The opposition ignores the agreements signed by the opposition leaders themselves with the authorities. So what are free? In ruin and lawlessness?

I will come today from work and watch your TV channels. Although what to watch - everyone has their own truth. You just have to decide who is lying less.

You constantly say that in order to understand you, you have to live in that country, that Putin will not bring you manna from heaven, that someone occupies you, you talk about my freedom. Do not worry about my freedom. And for my country do not suffer from insomnia.

I know that we have a lot of problems. Lots of. But the majority still lives with dignity, and I, having shook myself everywhere, from Primorye, to whom I gave 10 years of life, passed through Transbaikalia, Siberia, the Urals and the south of the country and everywhere after working for several years, I saw everything with my own eyes and passed kicks.

But about your release, wait to rejoice. I do not know what they show you, but look on the Internet. There is enough information. Meet Americans wandering around weapons in Odessa and Donetsk. This would not have dreamed recently and in a nightmare. These fighters were excellent training in all hot spots, where thanks to them people washed their blood. On the Internet, you can learn about Ukraine’s negotiations on the deployment of US missile defense systems. On the sale of the gas transmission system to Ukraine abroad and the transfer of shares of metallurgical enterprises. Particularly impressive is the latest information that the same snipers killed policemen and protesters on the Maidan. This is not the information of Russia. This is a confirmed fact by Estonia. And the worst thing is that when Ashton talked about this, she was not surprised at this terrible news, but continued to insist on the escalation of the confrontation, saying that it was necessary to hold on for a bit. I don’t know how our Lavrov will have to smile at her meeting and shake hands. Apparently after these handshakes will have to wash very carefully. Thus, it is safe to say that now you have either murderers or people directly involved in the killings. And you there - heavenly hundred ... It is a pity. Very sorry for all the victims. Born to live and enjoy life. Yes, that's folded.

Delights decency of medical women Maidan. Knowing that the injuries of almost all the victims were the same and having an idea of ​​your great leaders involved in this, she refused to become Minister of Health. Apparently, not to share responsibility for these crimes.

Regarding the authority to enter the troops. You're right. But right in their own way. If people in masks with blood-stained chains and blood-stained bats roar along Khreshchatyk, chanting “Moskals for knives” and “commies for gilyaks” threatening the residents of Crimea with “friendship train” - only very naive or frankly stupid people can hope for calm. I am opposed to Russian guys suffering for your mistakes and your liberalism. I am categorically opposed to Russian oppression. But you leave no choice. And about the ownership of the Crimea, I have my own personal opinion, which is somewhat different from the official one. Over the Crimea, Russia fought three wars. I paid for it with gold and big blood. There are now 2 / 3 residents of Russians, more than 200 thousand Tatars, more than 450 thousand Ukrainians, there are Greeks, Armenians. And the decision of 60 years ago, the villain Khrushchev, who was unable to keep the authorities (like Gorbachev) for me personally, is not the reason for transferring part of the territory of the RSFSR to another fraternal republic. There is no country that transmitted. There is no that fraternal republic, which passed. And at this time there is a state that, from very close fraternal relations with Russia, thanks to the lack of will of the people, passes under the rule of the fascist minority, which was prepared in Lithuania and Poland with American money. And you know, the Russian fascists do not accept. My great-grandfathers, three times dispossessed, my grandfather otruzhivshiy 11 years in the zone, and then fought with the Nazis at the front, and another, buried in Khmelnitsky and died after the Gestapo prison in 1947 year, I will not forgive another attitude to the Nazis.

Do not forget the Kosovo Albanians, who chop off the territory of the Serbs and organized the state. After all, the world community was with two hands FOR. What is not an example for the Crimea? Crimeans have more rights to statehood than they do.

And, in general, knowing their media, which whipping up hysteria and giving information not always objectively, I know that your oligarchic media are doing the same. Sorry, and I'm sorry, there is an information war going on. And its results are visible. According to the intonation of my relatives (and in Ukraine I have more than 60 brothers, uncles only from the famous and ancient Ukrainian family of Savul, who, with the approach of the Poles, were forced to become Savulitsky, Sivolitsky, etc. ...), according to the intonation of my classmates, friends childhood, comrades, and just acquaintances, I see how you are brainwashed. I see how there is a restructuring of relations, perception historical events and changing attitudes towards Russia. Unfortunately, I know that there is no worse enemy than an offended brother. But such a division, the upbringing of a whole generation of pro-Western youth, the choice of inadequate politicians in power, the upbringing of hatred for a common history (sometimes tragic, but to a greater extent glorious), is your choice. We did not bring up, we did not choose, we did not build such relations and organize tragedies on your land. We were mostly creating. Some things worked out well, some didn't. But the fact that Ukraine, thanks to fraternal friendship with Russia, was able to become a great power is an obvious fact. And we cannot rejoice at what is happening with you now. And for me personally, this coup of yours is a tragedy. And a tragedy for my whole life.

I return to your statements about the manna that Putin is obliged to bring to you. No one will bring you anything. And the Americans are sure that they will bring nothing good except the devastation and suffering of people. Look around. Where they put their nose everywhere problems. And terrible problems. You yourself must go your way. They must drink their own cup. To help, I think Russia can. But to share with you your problems - thank you. Putin can only push aside the danger borne by my children and grandchildren by your fascists like Yarosh, an American protege of Yatsenyuk, just a madman with a White gun. And in the near future, the United States and NATO will also join these figures.

Well, Lyoshka, all my thoughts on this issue. I hug. And I do not hold on to evil.

Ctrl Enter
Noticed oshЫbku Highlight text and press. Ctrl + Enter
We are
What you didn't want to know about EnglandInterview by President Bashar Al-Assad to the Sunday Times
Military Reviewin Yandex News
Military Reviewin Google News
57 comments
Information
Dear reader, to leave comments on the publication, you must sign in.