Mat in two moves. Why do we have to knock out Bandera 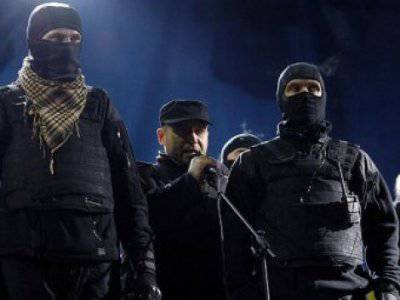 As we remember, yesterday President Yanukovych declared the illegitimacy of the government, which operates under the control of armed militants. Next we have a curious legal incident.


Yanukovych’s own powers are not contested, since, according to Ukrainian legislation, he must put his signature on the Rada’s decision on his own resignation. Not to mention that the Rada, which stamps the law surrounded by thugs with bats, is not a legitimate parliament.

In turn, the Crimea announced the recognition of Yanukovych as president. This means that the legitimate authority of Ukraine controls only a part of the country, and its integrity is threatened.

Further, Russia acts as a guarantor of the integrity of Ukraine under the Budapest Memorandum of the Year 1994. In fact, this memorandum now obliges Russia to throw out Bandera from Kiev and eliminate the threat of a split in Ukraine. The memorandum of shackles turned into weapon. Sometimes you just wonder how helpful politicians are in the martial arts.

Thus, we already know the answer to today's request from the “government” Yatsenyuk about Russia's intentions to fulfill obligations, that is, to give money. There is no money for the Kiev junta. They were promised to Ukraine and will go to those regions that confirm their loyalty to legitimate authority. Crimea, for example, recognized Yanukovich as the acting president, causing many to be perplexed. Although what to be surprised? Good or bad, he remains president and who will be next will be shown elections in 2015. But this recognition kept the Crimea in the legal field of Ukraine, after which he received financial assistance.

At the same time, the junta itself has no money, and after the cancellation of pensions and benefits payments, information about the plundering of the deposit insurance fund by the new government is already coming. In fact, this means the death of the entire banking system of Ukraine and at the same time the complete impoverishment of its population, whose contributions can now disappear without a trace. Before the default country left half a step.

It is clear that in this situation only those regions that fail to trust the coup will get a chance to stay afloat. But here there is an obstacle that Russia itself cannot overcome.

Colleague Marakhovsky is right, we lost the war for the minds. This is a medical fact. It is impossible to ignore the shaft of messages from people who communicate with their relatives and friends in Ukraine and are horrified by how much people have washed their brains. And it's not about zapadentsev, but about normal, previously adequate people.

The worst thing is that with these Ukrainians it becomes impossible to speak the language of facts. They cannot be explained that the association agreement with the EU is deadly for the economy or that Russia is up to the letter to comply with international agreements, because they simply refuse to look and think. Instead, a thick, emotionally charged fog reigns in our heads. How is it possible to do this with the whole country, even if with the complete long-term control of the oligarchs over the mass media? This topic at the intersection of media history and psychiatry is still waiting for its researcher.

But now, unfortunately, it is time for us to stop trying to do good to Ukraine. Infection must devour itself. It’s impossible to pull Ukrainians out of sweet dreams of Europe, except for rough reality. In any other case, they will hang all the dogs on their rescuers and will never forgive them.

Therefore, no one will release the captured regions by force, but only at the request of a population that has become tired of lawlessness and poverty, who has come to its senses and decisively. Wait a short time. The West once again does not give money, but the spring flood is on its nose and you have to buy food for something.

So the next move is for the Ukrainians. The question of personal courage is now being addressed - whether Ukrainians are able to take power away from the traitors who recognized the insurrection and declare national self-government. This is a test for adulthood and civic consciousness of all the polls - first of all, the men whose weapons are at home, and the policemen in the cordon, who protect from the people those who should be arrested.

And only when the administrative buildings, following the example of the maydanschik, will be taken by the people, and the flags of the regions instead of the flags of Ukraine begin to fly over them, will Russia take the next step. Only those who are truly motivated and ready to save themselves are worthy of help, and the sooner people gather their strength, the less will be affected by the crisis.

If the South-East will eventually be released by pensioners left without pensions, this will fall on its inhabitants with indelible disgrace.