Russians "who are not," but whom they fear 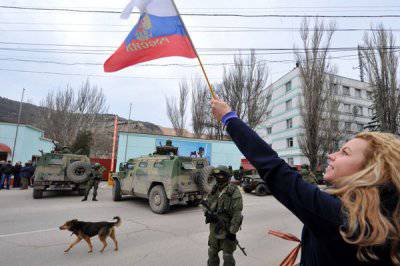 It is impossible not to notice that immediately after the euphoria from the gore, corpses, chaos and Yanukovych’s multiple launch into orbit, the festival of freedom, “moskal for knives”, human rights and democracy, reveling with portraits of Bandera and Shukhevych, merry pulling out the eyes of “Berkutovtsy” and fotochek "selfie" in the interiors of Mezhyhirya, the muzzle of our opposition parties suddenly pretty podvytyryanulis.


The reason was the villainous revolt of the Russian population of the East and New Russia against the democratic Bandera.

In Sevastopol, Simferopol, Kharkov, Donetsk and many more where people had the audacity to drive out to hell the sent Baredrovsk authorities and hang out Russian flags on the buildings of local administrations.

Supreme Light is in shock.

They started as usual in such cases, people who believe that they have some kind of superiority. With threats.

“You can distribute Russian passports and send troops under the pretext of“ protecting Russian citizens ”(according to the“ Ossetian variant ”). You can annex the Crimea. But then what? It is not only about the inevitable international isolation (the Crimea is not South Ossetia, for twenty years it has de facto lived separately from Georgia). The fact is that “independent” (or annexed) Crimea, for a start, will remain without water for irrigation and drinking. Who believes that Ukraine will then retain the supply of Crimea with water through the North-Crimean Canal? Or will it not require a lot of money for it? ”Asked Boris Vishnevsky, a deputy of the legislative assembly of St. Petersburg.

«We'll have to explain. Above the Crimea there is a thin isthmus, on which trains with Russian tourists travel to the Crimea, but not only. The North-Crimean Canal passes through it, through which water flows from the Dnieper River to Crimea. It is thanks to this channel that agriculture can exist in Crimea and many people live. That is why the Crimea is attributed to Ukraine - it is necessary to close the channel, and the Crimea will turn into a desert. It is impossible to adjust the water supply in any other way, it is expensive to desalinate sea water, and this can be done only for coastal cities. That is why all the fantasies about the separation of the Crimea were and remain fantasies. ... And in the Crimea live Crimean Tatars, who do not like Russia very much (there are reasons) and, unlike the Russian population, who is used to the relaxed Russian resort, are very organized“- indulgently informs famous blogger Igor Bigdan.

What does all this mean in translation into our human Russian language from this economically affectionate language? This means: Well, well, they knelt down, Russian slaves, and started kissing those assholes that you were ordered to. But not that - you will die of thirst.

A tempting offer, isn't it? It contrasts particularly well with the many years of howling about gas prices that Russia has set for Ukraine. How so? But what about the "brotherhood of nations"? But what about “let go of your brother if you love him”? What were you - were disingenuous to us?

In principle, already in the argument itself to obedience, there is an iron clash of counter argument.

Igor and Boris! And your fingers do not jerk on the valve? I'm not about conscience. I'm talking about the price of gas. I'm talking about Crimeans who can take this friendly hint as an offer to recapture all the territory necessary for their self-sufficiency. Together with the Crimean Tatars, with which you are going to poison the Crimeans, but who also do not like thirst and hunger.

In order to dare to block the valve of Crimea and begin the blockade of the Crimea, you need not just to have eggs. It is necessary to have steel eggs. H. Igor and Boris! Do you mind if they feel it?

... Someone does not like the style of our Ministry of Foreign Affairs. Here is Alexander Pinhosovich, for example:

«Either they got infected with the manners from Yanukovich, or the zek culture, having successfully supplanted the language of the diplomatic protocol, she herself conquered a skyscraper on Smolensk, but the fact is obvious: the Russian Foreign Ministry was outraged by the “lawlessness” in Ukraine. So they write in their official comments: "We demand from the new Ukrainian authorities to stop this lawlessness." In my opinion, it is wonderful: the president “wets the toilet”, the Foreign Ministry talks about the “lawlessness”!»

And really! And how does our language turn only to say such an indecent word to these wonderful people?

It is necessary for the Ministry of Foreign Affairs to take Alexander Pinhosovich by the scruff of consultants, show him this video and ask how to call it in diplomatic documents? We all want to listen.

But it's not only that. The fact is that the reunification of the Crimea with Russia is fascism. That is what former big man Andrei Illarionov thinks.

In his opinion, this is the fascists, but this is probably the Comintern.

I really liked the fact that, against the background of the Crimean events, some people, who had not been interested in ethnography recently, suddenly discovered a whole nation — Russians. For example, deputy. Ayder Izdetovich Mujabaev, editor-in-chief of the Moskovsky Komsomol:

«Moreover, these armed militants first of all set up the Russian people, who, like all Ukrainians, Tatars, do not need war or hatred in the Crimea. They need work, peace and order, they need tourists from Russia and other countries. I will say straight out as I think: this is a disgusting provocation against the Russians, whose alleged interests clinging to power are used by the gangsters as an ideological cover. Russian Crimeans are beautiful, friendly, respected and friendly with Tatars, Ukrainians. Raising children together. Go to each other for weddings, funerals ...»

That's about the funeral - especially appetizing.

Well this is a dream for people to go to the funeral all the time. Under the strict guidance.

But already that on "Echo" they suddenly remembered the Russians! This is such a sign that ...

And what did they remember, by the way? Why did Russian Crimeans suddenly turn from imperialist scoops into beautiful people?

And just soon the referendum on the status of the Crimea. Suddenly something began to depend on the voices of the Russians. And not only from the votes. But also from ability to lift and direct a trunk on the person.

Therefore, Tyagnibok began to write down appeals to Russians, and the “Lviv intelligentsia” began to mumble something about the Russian language.

But this is not the most delicious.

The fact is that the Crimean Russians have one property that is especially important for the handshaking party.

These are Russians who were ruled by Kravchuk, Kuchma, Yushchenko and Yanukovych for more than twenty years.

These Russians are vulnerable. So, theoretically, by force and intimidation, persuasion, deceit, they could, perhaps, somehow be turned into “ideal Russians” - so that they would not dare to speak their own language so that history taught by someone else's Russophobic textbooks, so as not to dare to have their own dignity, to pay and repent. And on spoons played on taverns. This is the ideal Russian, the existence of which can be recognized. It can even be considered good.

Unlike the terrible monsters that inhabit Russia, protected by a powerful military machine - aviationarmy and fleethaving industry, science and faith, brazenly believing that they themselves have the right to decide what is good and what is evil. Russians who choose terrible Putin. They would be better not at all.

Here, some have come to the point that they openly believe that the “polite people” in the Crimea are Russian soldiers. They say that Russian helicopters fly over the Crimea, that Russian armored personnel carriers drive Ukrainian roads back and forth. What a lie!

Any Alfred Koch will instantly prove to you that there is no one more cowardly than a Russian man in the world. Any Felgenhauer on your fingers will explain to you that the armament of the Russian army is rusty scrap metal. Again, the Russians are millennial slaves and alcoholics.

Where are we with such and such data to climb into a European power inhabited by descendants of free Cossacks and UPA heroes?

And there are no Russians themselves, and there never was. There is only a rabble, scoops, an anthropological catastrophe, a product of negative genetic selection.

Nope us. Nope Take it easy. Never mind. We can not be. Can not be. We do not exist.

We are a myth, a game of your consciousness.

And come to the funeral. Required.

Ctrl Enter
Noticed oshЫbku Highlight text and press. Ctrl + Enter
We are
About Stalin and KhrushchevWhat you didn't want to know about England
Military Reviewin Yandex News
Military Reviewin Google News
65 comments
Information
Dear reader, to leave comments on the publication, you must sign in.