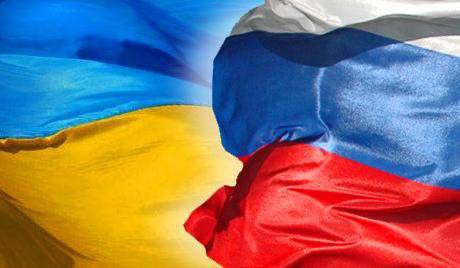 The head of the “Right Sector”, Dmitro Yarosh, has already managed, through the swearing-in authorities of the media, to report that he is not in any way a Russophobe and that Russians in Ukraine are not in danger, that no one, they say, will touch them with their fingers if ...

It was in this “if” that the whole salt remained: the Russians in Ukraine just now must silently “know their hearth”, not daring to think (except perhaps not out loud) that Kharkiv, Sevastopol, Sumy, Odessa is Russian land , not daring to remember that Kiev is not only the capital of “Square”, but, in fact, “the mother of Russian cities”. It seems that there is still no way to do without repressions, since the force of conviction cannot “correct” the South-East of the new government, and the bolsheviks of the 21st century sincerely do not want Ukraine to split Ukraine: their ambitions are much wider than the limits of Galicia.

So, you will not envy those who disagree with the new humanitarian course of Kiev. The new administration is hardly ready to become a collective Voltaire and agree to "die" for the right of the Russians to have their own opinion about whose land it is on.

Someone here will skeptically grin: they say, after all, Sevastopol and Odessa experienced Svidomo regime of Pan Yushchenko, survived. But only then, I remember, the current leader of Freedom and co-organizer of the coup, Oleg Tyagnibok, was expelled from Our Ukraine, Yushchenko’s, precisely because he called on his comrades to follow the example of the UPA militants who “fought the Jew and Moscals” ". The avant-garde of Maidan, which has occupied the leading posts in Ukraine, is clearly much more bull-headed than Yushchenko and Tyagnibok together.

In such a situation, it would seem logical if Russia would nevertheless take care of her fellow countrymen by word and deed, who, by the will of political fate, were cut off from Russia, have Ukrainian passports, but the further they are, the more obviously they will be “non-citizens”.

Very soon it will be possible to completely forget about the Russian language in schools (under Irina Faryon as Minister of Education), considerable difficulties in finding a job are possible (thanks to the lustration law), not to mention the generally disastrous consequences of cultural alienation from Russia. Of course, the older generation can’t be fixed and broken, but those Russians in Nikolaev and Simferopol, who are now 10-15 years old, what will they be in five years?

If Russia does not intervene now.

Intervenes not the introduction of the army. From loud saber weapons Now a little good, taxis new global trend - "soft power." The one that the United States still allows Washington to solve its problems and console the geopolitical ego. The “soft power” on the part of the Russian authorities could be the official recognition of compatriots in Ukraine by their people who are entitled to the support of Moscow.

It seems that for our diplomacy this question is not one of the unsolvable, it is good and from whom to take an example. So, Poland supports its compatriots in the CIS countries specially developed for them by the "Card of the Pole", which plays a really important role in gathering countrymen scattered around the world and supporting them. This document allows them to live without separation from the roots, to do business in Poland on a par with its citizens, to get an education, to develop in the context of their culture.

And we? Can not afford such a luxury? Or do we hope that the Russians in Ukraine, who are cut off from Russia, will be able to preserve their identity?

And after all, the most important (and offensive) is that such a mechanism has long been developed. Back in 2009, the Russian Foundation proposed to legislatively introduce the Russian Map as a “document of Russian identity for those compatriots abroad who did not lose their blood-related and spiritual and cultural ties with Russia and remained Russians”.

I don’t even want to remember what the response of the Russian Ministry of Foreign Affairs was then. But still we quote the words of the then official representative of this department, A.A. Nesterenko, who spoke at one of the briefings: “The provocative action of the Russian Foundation separates compatriots on a national and religious basis, sows among them the expectation of receiving various benefits, gives an opportunity to well-known circles in countries where it is planned to issue the Card, to accuse Russia of creating fifth column.

And now the same Foreign Ministry complains that in Ukraine, they say, "there are calls for the almost complete ban of the Russian language, lustration, the elimination of parties and organizations, the closure of unwanted media, the lifting of restrictions on the propaganda of neo-Nazi ideology." Thus, the Ministry of Foreign Affairs signs that for the protection of the rights of the Russian population for all these years nothing has been done. And the fact that the calls "to prevent further degradation of the situation, to return it to the legal mainstream" by the militants who have felt the taste of blood, who are preparing a campaign to the East of Ukraine and to the Crimea, will not be heard, is clear to all, except perhaps quite so mentally retarded.

So, maybe before it’s too late, Russian diplomacy will still listen to the voice of civil society?

In a conversation with a KM.RU columnist, a well-known public figure, head of the Russian Foundation, Major General Leonid Shershnev, said that Russia should learn from the experience of Poland and a number of other countries in supporting their compatriots living abroad:

- First of all, our Ukrainian brothers need moral support: you need to instill in them a belief that Russia will always be with them, that Russia will not betray them. This should be the main message that will give them spiritual strength, attitude. Otherwise, Ukraine will finally be at the mercy of Bandera.

So our top management now needs to give up serious efforts so that the environment of our compatriots in Ukraine will not be demoralized, so that the Russians will not give up. They should know that they can always ask for help from their homeland. This is a key moment, which, as it seems to me, at the moment is more important than all our other decisions and actions in the Ukrainian direction.

One of the ways to solve the problem of moral support and consolidation of Russians is the “Russian Map”, which our Foundation several years ago offered to distribute to our compatriots living outside Russia. But first of all it is the authorities who should voice this initiative at the highest level; this should be its willful decision.

We, on the part of the public, will distribute this “Card”, will seek the adoption of a relevant law that would stipulate all preferences for its holders. Such that the Russians have the feeling that they really need their homeland, that she did not abandon them.

Now, judging by the calls I receive from Ukraine, I can only say with sadness that our compatriots in Ukraine have no such feeling, and not only there ...

For now, it is difficult for me to assess whether the federal center is ready for the implementation of our project, however, in part, signs of interest are viewed. In particular, several Duma deputies in conversations with me warmly supported this idea and, moreover, expressed their readiness to write the corresponding bill. And one of these days I will have another meeting with them, at which I will give them some of our new developments, which we will jointly punch.

Ctrl Enter
Noticed oshЫbku Highlight text and press. Ctrl + Enter
We are
About Stalin and KhrushchevWhat you didn't want to know about England
Military Reviewin Yandex News
Military Reviewin Google News
129 comments
Information
Dear reader, to leave comments on the publication, you must sign in.