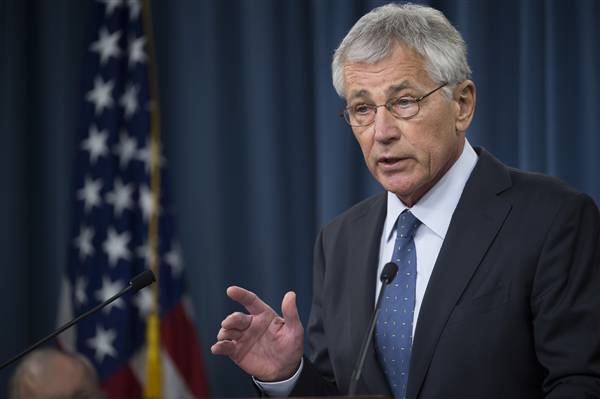 US Defense Secretary Chuck Hagel (pictured) announced a further reduction in the number of armed forces as part of measures to reduce the country's military budget, the Pentagon’s official website, 24, said in February.


The army will be reduced to the minimum size that the United States had before the start of World War II, but it will be able to provide America’s defense against strategic threats. Over the next two years, the Pentagon’s budget will be cut by 75 billion.

The number of US Army personnel will be reduced from the current 520 thousand to 440 thousand people, but at the same time it will remain sufficiently equipped and trained military force.

It is assumed that the US will no longer participate in large and long-lasting military campaigns like in Iraq and Afghanistan, but the army will be able to "win in one major war", the Navy and Air Force will be able to be active in another theater of operations.

The number of special forces will grow to 4 thousand people and reach 69700, which will ensure the ability of the United States to respond effectively to asymmetric threats, said the Pentagon chief. The US military budget will be reduced to 496 billion. “The size of the US Armed Forces will be reduced, and we will have less room for error. Let's face it, the picture of the future is rather vague, ”said Hagel.

$ 3,5 billion will be saved by withdrawing A-10 attack aircraft from the air force and replacing them in the 2020s with F-35 fighters. "A-10 is a 40-year-old highly specialized combat vehicle designed to destroy enemy tanks on the battlefields of the cold war. An attack aircraft cannot survive and operate effectively where the enemy has more advanced aircraft and air defense systems, ”the minister said. In addition, it is planned to decommission 50-year-old U-2 reconnaissance aircraft with a replacement for Global Haw strategic reconnaissance drones.

Among other suggestions are the following points:

- The army will cancel the program for the development of BMP Ground Combat Vehicle.

- The US Navy will maintain the number of aircraft carriers at 11 units, but if even larger budget cuts are adopted, this may require the preservation of the aircraft carrier George Washington.

- Half of the 11 cruisers will be put into reduced operational readiness for upgrading and longer service life.

- The Navy will buy two destroyers and submarines annually.

- The number of Marine Corps will be reduced from 190 thousand to 182 thousand people, but they will have to be reduced even more if the sequestration of the defense budget continues.

- Another 900 marines will be sent to guard US embassies in foreign countries.

- The US Department of Defense asks Congress to clarify the military budget framework for the 2017 fiscal year.

Hagel stated that most of the recommendations were adopted on the proposals of high-ranking officers. At a press conference with the head of the Pentagon, the chairman of the Joint Chiefs of Staff of the US Army, General E. Martin Dempsey (Martin E. Dempsey), answered the questions of journalists, who said that the spending plan reflects “army reform so that it will continue the best in the world. " “We reduce costs and make sure that the armed forces are in the right balance,” the general said.

Ctrl Enter
Noticed oshЫbku Highlight text and press. Ctrl + Enter
We are
US expert community is trying to identify ways out of the Afghan impasse
Military Reviewin Yandex News
Military Reviewin Google News
25 comments
Information
Dear reader, to leave comments on the publication, you must sign in.